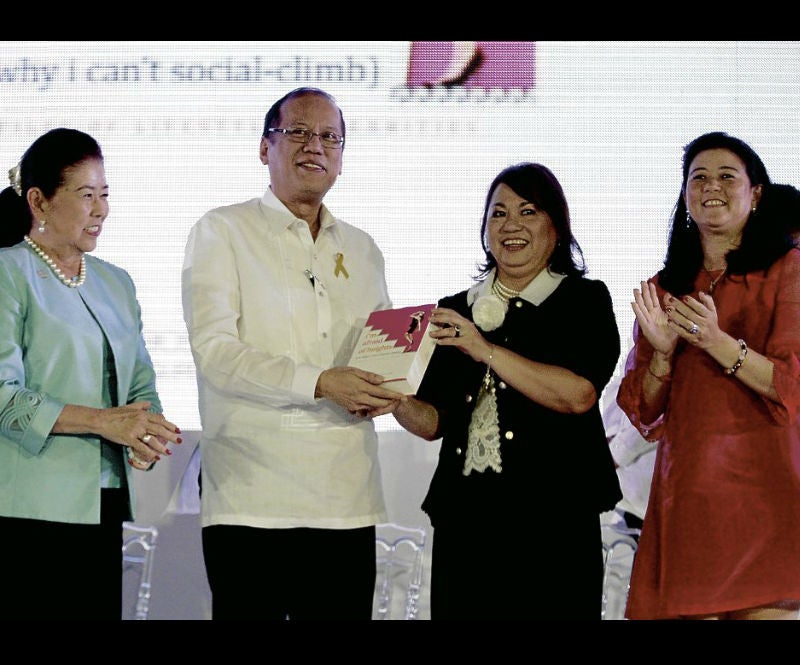 AFRAID OF HEIGHTS Inquirer Lifestyle editor Thelma Sioson San Juan presents the first copy of her book, “i’m afraid of heights (or why i can’t social-climb),” to President Aquino at the Rockwell Tent in Makati City. At left is Inquirer chair Marixi Prieto and at right is Inquirer president Sandy Prieto-Romualdez. The book is a collection of more than 90 personality profiles San Juan has written in her career. RICHARD A. REYES

Newspapers could regale its readers without sacrificing depth or accuracy.

President Aquino made this statement during Monday’s launch of Inquirer Lifestyle editor Thelma Sioson San Juan’s book “i’m afraid of heights (or why i can’t social-climb)” in Makati City.

The President said a lot had changed in the political landscape between 1987—when San Juan interviewed him for a story about his sister Kris’ entry into show biz—and the present.

“This includes perhaps the biggest change of all—when, more than two years ago, our people’s clamor for change manifested in the presidential election. They voted for an idea that would inject reform and optimism back into our country: If there are no corrupt officials, there are no poor people,” he said.

Mr. Aquino recalled that San Juan, who was with him in Tarlac on the eve of the May 2010 presidential election, predicted that he would become the country’s next leader after seeing the “overwhelming enthusiasm of our people to change the country.”

“I thoroughly enjoyed the piece she wrote about that moment, and I am grateful that it’s the first (personality) profile in this book. But there are also several other profiles in this book that serve as living snapshots of the people who have shaped our country’s story,” he said in his speech aired over government radio.

“Through Thelma’s works, we see how these people were—what made them tick. We also see how they have evolved through the years; how some of them have remained ageless, while some have lost hair; and how some have even grown a new head of hair,” he added.

Mr. Aquino said the “joy and the education” that readers derived from reading San Juan’s book was not just a result of her talent, hard work and “affinity with style.”

“I firmly believe that it is also a result of what (Inquirer editor in chief) Letty Magsanoc called, in her introduction, an ‘activist conscience—a staunch dedication to the principles of journalism, and a devotion to her readership,’” he said.

“This spirit embodied by Thelma and journalists like her was the same spirit I referred to when I last spoke to the Inquirer family—when I complimented you for getting your facts straight even in reporting about my love life. Truly, there is a way of entertaining your readers without sacrificing depth or accuracy, and throughout her career, Thelma has kept that balance,” he added.

The President said the country needed more writers like San Juan, and more books like hers, after all, these were works that “ultimately allow those in public life to break free from their caricatures.”

“At a time when politicians are treated as commodities rather than initiators of change, Thelma brings us back to the substance of the people she covers. Think of it: In her articles, she gives you that telling detail, that revealing nuance that gives you a more multidimensional glimpse into the person,” he said.

Mr. Aquino admitted that his sister, more than he, could relate with the Lifestyle section.

“My sister Kris, whose domain is the Lifestyle pages, loves me, but I feel she is constantly under pressure to tolerate my ‘clothing extravagance.’ And as for me, what is there to write—you can’t even write that much about my so-called love life—unless you include love of country in the story,” he said.

The President said San Juan and her breed of writers “allow the Filipino people to know who these people really are.”

“They fulfill our human need to genuinely connect with one another. This is where I believe this book finds its profound value: In conveying real lives to readers. These articles may have been written to meet a deadline, but their worth will outlast all of us. And this book allows us to hope that future readers can gain small nuggets of wisdom—lessons that can change the way they see things, and help them on their way to moving our country forward,” he said.