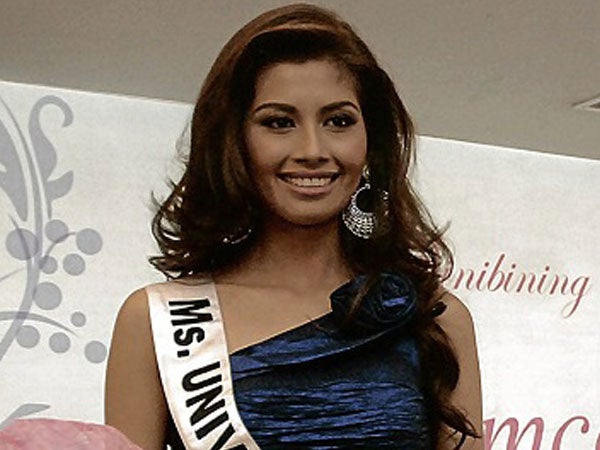 MANILA, Philippines—Miss Universe 2011 third runner-up Shamcey Supsup got an invitation to become a host in the coming Miss Universe pageant.

Marquez-Araneta expressed hope Shamcey’s popularity in the pageant world would “rub off on Janine” to bring the new delegate good luck for the competition.

Supsup told the Inquirer she received an e-mail about the invitation to become a host for the web-based components of the competition, but initially found it suspicious.

“Miss Universe Organization, an international pageant, would e-mail me just like that?” she recalled as saying. But the organization also sent the same e-mail to BPCI, which confirmed to Supsup that it was a legitimate correspondence.

Upon learning that the invitation was indeed true, Supsup said she had mixed emotions. “Of course I’m happy. But I also got nervous. We really planned to watch the pageant, become part of the audience and cheer for Janine. Then suddenly, I’m hosting? So there’s really an added pressure on me,” she confessed.

“But the good thing about it is that I’m privileged, it’s an honor. Not everyone gets a second experience with the Miss Universe. As a backstage host, I’ll be able to meet the girls. So I’m excited and happy to get that experience as well.

Supsup said her itinerary has not been confirmed yet. But for now, she was told she would host the online coverage on the pageant’s official website, www.missuniverse.com, which would involve the preliminary competition, the national costume competition, as well as other activities.

She told the Philippine Daily Inquirer that the e-mail said the members of the organization found her a “perfect fit” for the position. “I was the only one who spoke English during the 2011 Miss Universe [question-and-answer portion].  And the second reason I’m thinking is because Filipinos are pageant fanatics who are very active in using the Internet.”

Supsup is expected to leave for Las Vegas, where the 2012 pageant will take place, on December 13. She does not know yet if she will be given exposure during the coronation night set on December 19 at Planet Hollywood.

“I’m very-very happy that Janine will represent the Philippines in the Miss Universe. Right now, I’m already proud of her for everything she has done, her transformation and all the effort she exerted to improve in all aspects. That alone makes her a winner,” Supsup said.

Her predecessor, 2010 Miss Universe fourth runner-up Venus Raj, also has high hopes for the new queen. “I believe she is, so far, the best representative for the Philippines!” she exclaimed.

“What will make her get noticed is her distinct Filipina beauty. Just one look and you’ll see she’s Miss Philippines. Also, her fighting spirit will make her do well in the competition,” Raj added.

Another celebrated Filipina beauty, 1999 Miss Universe first runner-up Miriam Quiambao, throws her full support to Tugonon. “She’s a beautiful, smart woman and has a great chance to win Miss Universe,” she told the Inquirer through a text message.

Tugonon, meanwhile, promises to give a good fight and try to sustain the country’s back-to-back placement in the pageant’s Top 5 courtesy of Raj and Supsup.

Especially this year when the country’s representatives bagged the main titles in the Miss International Queen and Manhunt International pageants and placed second in the Miss Earth and Mister World contests, Tugonon said she “is more inspired and motivated to do good in the Miss Universe and give my best.”

Supsup and Raj also told Tugonon not to allow herself to be affected by her detractors.

Like Tugonon, both Supsup and Raj received flak from displeased pageant fans prior to their departure to their respective competitions.

“It’s up to you if you will let them affect you. These may serve as an inspiration, something that will make you stronger. Don’t ever let them destroy you. The best thing you can do is prove them wrong,” Raj said.

Supsup agreed: “Back then, I realized that you only listen to the people who matter. They won’t criticize you just for the sake of criticizing you. They criticize you because they want you to become the best that you can be.”

The two also shared some words to Tugonon’s detractors.

“We should not bash our representative. We should support her,” Raj appealed.

Supsup added: “You don’t know what the girl is going through. If you’ve been in a pageant, it’s not that easy. I hope they respect her. Before you say something bad to a person, try to feel what it’s like to be in her shoes.”

She first joined the Binibining Pilipinas pageant in 2011 and placed first runner-up.

Araneta, meanwhile, asked Filipinos here and around the world to support Tugonon by voting online.

Up to 10 votes per e-mail address will be accepted per day at www.missuniverse.com.

ABS-CBN will beam the pageant live in the Philippines.