Ramen sprinkled with parmesan cheese dipped in cheese sauce–yes, there is such a thing | Inquirer Lifestyle ❮ ❯ 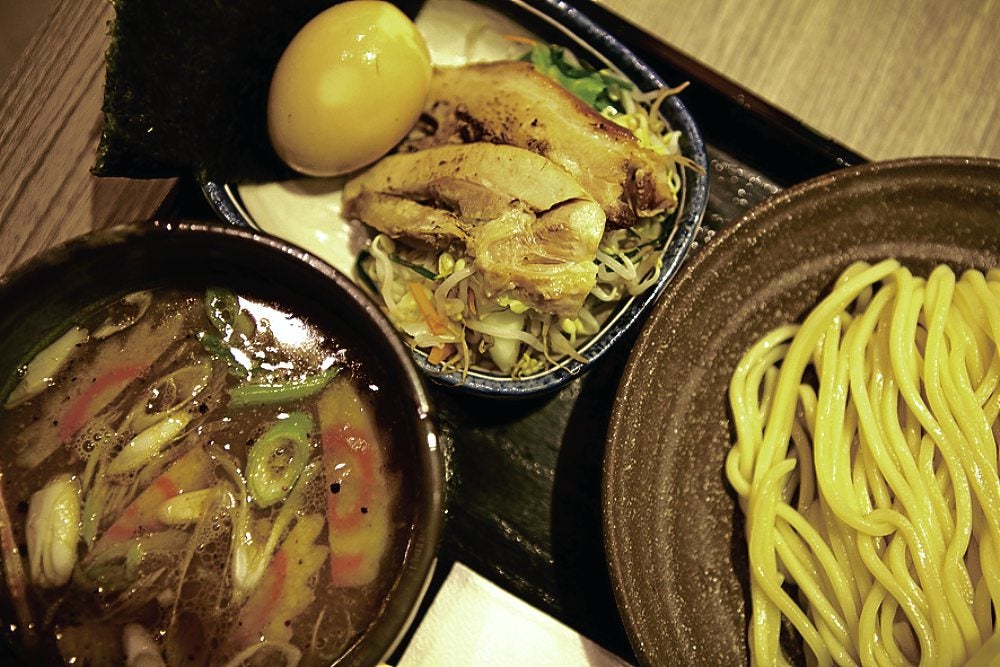 Ramen sprinkled with parmesan cheese dipped in cheese sauce–yes, there is such a thing

Perhaps the most peculiar meal I’ve had in recent memory was at Mitsuyado Sei-Men, a ramen restaurant on Jupiter Street in Makati.

I was about to say ramen joint, but it isn’t, really; it’s far too slick to be called a joint, although the décor would suggest that it aspires to be one.

One enters the restaurant and, very confusingly, walks into an outside: a back alley in Tokyo complete with shuttered gates, fading posters, a street cart, posters and cobblestones, as would have been rendered by an opera set designer. Against the backdrop of this expressionist mise-en-scène are chairs and tables, nicely spaced out.

Its speciality is ramen sprinkled with parmesan cheese dipped in cheese sauce, which sounded alarming, even to me. I opted for prudence and ordered an ordinary marutoku ramen. It was a decision I was to regret.

My wife’s tsukemen arrived, served beside its bowl of dipping sauce, redolent of the wondrous reek of parmesan on top and with a small bowl of luminescent melted cheese by its side. Mixed together, it looked like a hearty plateful of spaghetti with cheese sauce.

Going against every instinct of what is sensible and right in this world, one takes a few strands of this with one’s chopsticks, and dips it into the sauce, a rich but subtle shoyu-derived broth, nothing too strongly flavored. It’s a bite of starchy umami-coated goodness with a soothing warm chaser.

The double-cheese sauce is the ace-in-the-hole for this restaurant, which might otherwise not bob its head above the crowd in the competitive ramen wars of the city. The resto does ordinary ramen with the noodles in the soup aside from the tsukemen style of dipping cold noodles (or warm or even hot, though traditionally this Hakata dish is for summer months with noodles cold or at room temperature) in a broth.

And here, it has to compete with the artisans of liquid delight like Ukkokei; which, while it isn’t ‘OMG the most amazeballs bowl of noodles in the world!!,’ as the Internet would have one believe, it does bubble up some fairly amazing broths.

I’m personally delighted at the sudden discernment of the capital’s dining crowd for the quality of their ramen; a badly done bowl of noodles is the ultimate rip-off and one might as well stay at home and pour water into a styrofoam bowl.

A good bowl of ramen should be interesting and complex as well as comforting and satisfying, and it is here that Mitsuyado Sei-Men has to work hard to earn its place, after the diners have had their fill of the novelty of the cheese and cheese combination.

The noodles, made in situ, have to remain as good while the broth, which I have to say is already good, has to improve. By ‘improve,’ perhaps what I really mean is adapt: perhaps it is a spectacularly subtle sort of broth and my untrained palate has just missed the point completely, but I found it underwhelming and suspect that other similar palates may look for richer hues and deeper tones.

This is where it being a franchise can be a hindrance rather than a boon, as the place has to hew to the dictates of the mother ship. But if it is quick on its feet, I can envision it growing a loyal clientele for both its regular ramen and the Fukuoka tsukemen-style variant.

And for the sheer craziness of it, you can get not only double-cheese noodles but double-cheese with curry. It is beyond this line, I fear, that your correspondent dares not tread.