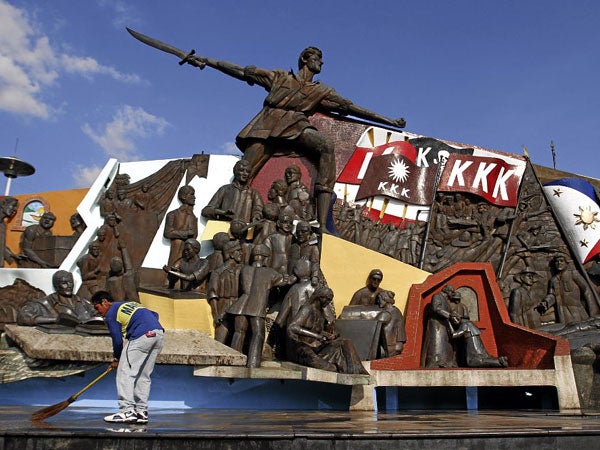 Statue of Andres Bonifacio at the Bonifacio Shrine in Lawton, Manila. INQUIRER/RAFFY LERMA

MANILA, Philippines—The revolutionary hero Andres Bonifacio was an excellent poet “and I will challenge anyone who will say he was mediocre,” said National Artist for Literature Virgilio Almario during Friday’s commemoration of the hero’s 149th birth anniversary in Manila.

Almario also launched his book “Ang Pag-Ibig sa Bayan ni Andres Bonifacio” published by the University of Santo Tomas, which deplores the suppression of Bonifacio “as the authentic father of the revolution.”

Almario called for a new image of Bonifacio as he did not wield a bolo but carried a “special revolver.” But whether Bonifacio fired a shot, he said he did not know.

Almario also frowned on the widespread representation of Bonifacio as a shabbily-dressed and poor man who sold fans and canes.

“If Bonifacio was shabby, the captain in Cavite, Emilio Aguinaldo, wouldn’t have traveled to Manila to pledge to him,” he said. “And if he was poor, he wouldn’t have been able to join the masonry and La Liga Filipina,” which had Manila’s rich and ilustrados as members.

Almario said Bonifacio sold fans and canes for an additional income but he had other jobs.

He said Bonifacio did not have a formal higher schooling but he knew English and Spanish. “In fact, he wrote a poem in Spanish,” Almario said.

Almario said that unlike the Propaganda Movement, the Katipunan led by Bonifacio wanted independence and not just equal treatment from the Spanish colonizers.