(Been) There and Back Again | Lifestyle.INQ ❮ ❯ 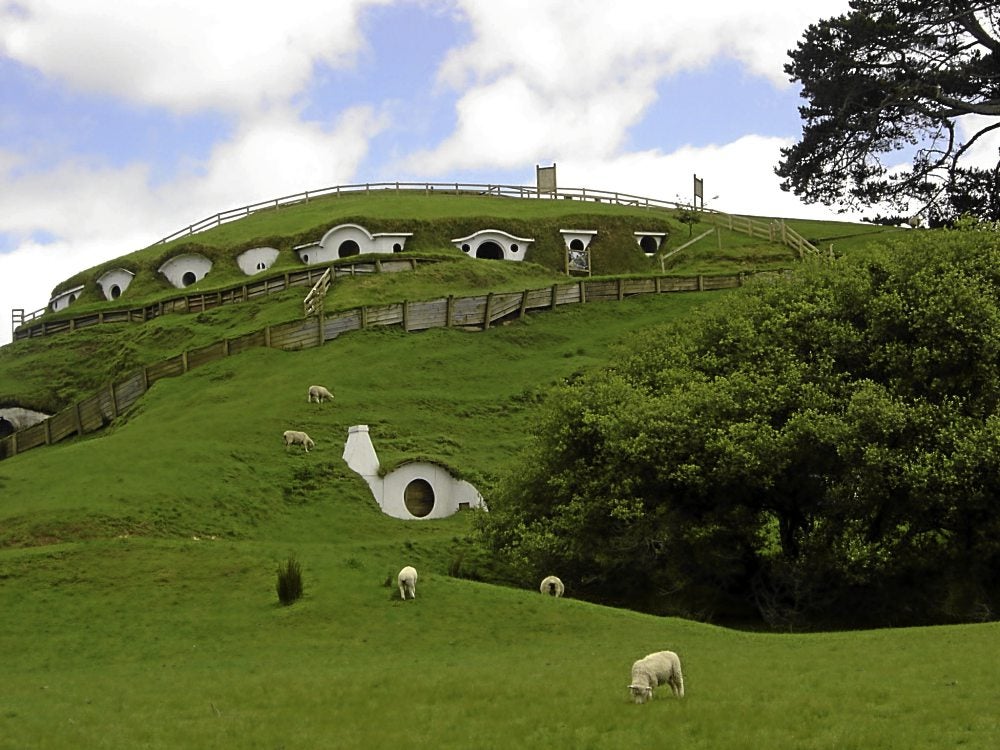 Scene of sheep and serenity at the Shire

(Been) There and Back Again

Scenes from Hobbiton, aka Middle Earth:  As seen in the Lord of the Rings trilogy. photos by Pennie Azarcon-dela Cruz

The sheep farmer was rooting for New Zealand’s national rugby team All Blacks in a hotly-contested game when he heard someone at the door. It was a stranger.  Could he talk to him, the man said, about a possible business deal?

But the rugby match seemed infinitely more exciting to farmer Alexander than the vague request of an anonymous guy. Could he come back later, perhaps after an hour? He told the man, shutting the door firmly on his face.

Fortunately for him, the stranger who would make him one of the wealthiest sheep farmers in New Zealand, didn’t mind the brusque reception and came back promptly an hour later.

Well, after all, the man-director Peter Jackson, a New Zealand native himself-had found the ideal setting for JRR Tolkien’s “The Lord of the Rings” and was not about to let go.

In an aerial search of the North Island of New Zealand, Jackson saw that the rolling countryside and vegetation of the Alexander sheep farm near Matamata could pass for the charming little village described as Middle Earth in the Tolkien novel.

Convincing the Alexander family (Craig, Russel and Dean) didn’t prove too difficult, either. The lucrative deal included a bonus:  In exchange for taking over their homestead, the family could go all over New Zealand while the movie was being shot, with Jackson himself footing the bill.  (It was said that the family toured NZ’s South Island in style for several months, so that when they presented Jackson the bill, the director almost fainted).

The Alexanders, who moved to the 500-hectare property in 1978, are traditional sheep and cattle farmers and make a good living from the mutton, wool and beef from their more than 13,000 sheep and 300 Angus beef cattle. About every eight months, they shear the sheep on the property themselves.

So it came as no surprise that the family would extract from the “LOTR” production group the promise that the farm would be restored to its original state after the shoot to enable them to resume their normal farming routine.

The production group did as requested, until the Alexanders found tourists trudging through and mucking up their property after the movie’s international release. They decided that

some sort of infrastructure and organized tours would be kinder to all.

Thus did the Hobbiton tours start.

Not exactly a bargain at NZ$69 a pop from Rotorua (about P2,300 at current exchange rates, but a bit cheaper if you come from Matamata or Shire Rest) when we last visited in February this year, the two-hour tour has nonetheless proven popular and remains a must in every New Zealand tourist’s itinerary. For sure, nobody felt shortchanged.

In fact, as avid Tolkien fans, we put Hobbiton at the top of our list when we first visited NZ in 2007 and again in 2012, when we brought our grown-up children along.

Much has changed since our first tour five years ago.  That first visit was essentially just a long walk through rolling grasslands, a lake, a large tree and some hobbit houses, only one of which tourists could enter and be disappointed with:  There was nothing inside but unpainted plywood on which was carved out a round door and two windows. Only the façade, it seemed, was worth a souvenir shot.  Sheep grazed around and one was free to pet and exploit them for photo ops.

In 2007, our tour guide, Eric, was an elderly kiwi (NZ native) whose drawl was so thick that listening to him actually took a major effort. Soon enough, people from the group started wandering about and shooting their own souvenir pictures until it was time to go back to the bus that dropped us off near our hotel.

This time around, the tours are much more organized, with bookings accepted online or through any of the tourist information sites found in every NZ town.  It was a quick and painless process but we had to stay overnight at Rotorua so the tour bus could pick us up early the following morning.  The tours start at about 10 a.m.

After more than an hour’s ride through NZ’s amazingly green countryside dotted with sheep (it is said that there are more sheep in this country than people), we got down the bus and got hit by a blast of bracingly cool air (February is the end of summer here, so it can get cold).  As we were a big group, we got divided into two groups of about 15 each, and felt like a gaggle of excited kids trailing our Pied Piper.

But beholding the diminutive houses up close was such a visual treat that we missed out on some back story details from our youngish guide. Even as the tour meandered along on a leisurely pace, we found ourselves lagging behind the group as we posed by, and took endless shots of, the dressed-up hobbit holes and the picturesque countryside.

It didn’t help that our children were natural show-offs, who would often point to locations of various movie scenes and spontaneously assume some of the characters’ roles, complete with verbatim lines. Roll, cameras!

“Oh look, there’s the Party Tree where the hobbits danced and drank on the night of Bilbo Baggins’ birthday,” the daughter exclaimed. More shots from absurdly proud parents.

Still, we managed to cock half an ear to the tour guide’s prattle, and accumulated some interesting trivia about “LOTR’s” location shoot and Hobbiton Tours.  Here are some of them:

• The Hobbiton movie set was constructed starting in March 1999, while filming commenced in December the same year. To make “Hobbiton” blend naturally into the landscape, the extensive set was planted with crops and flowers a year before actual shooting. The first “LOTR” film was released internationally in 2001.

• Farmer Alexander must have forgotten about dates because, according to the tour guide, he woke up one morning surprised to see bulldozers, loaders, trucks, graders and other heavy machinery on his farm.  Turned out the New Zealand army had been contracted to build a 1.5 km of road into the site.

• Although the movie location was rather remote and out of the way, the producers made sure that the cast and crew of at least 400 were served three two-course meals at par with five-star hotel offerings.

• Some tourists are so gung-ho about “LOTR” that they would come to the tours dressed up as their favorite characters. Rosie, Samwise’s girlfriend, was the most popular character among the female tourists, while the strangest so far (at least to our guide) was this tall and lanky German who tried to pass himself off as a hobbit.

• Director Peter Jackson was such a perfectionist that he had the oak tree overlooking Bag End reconstructed and its artificial leaves imported from Taiwan and individually wired onto the dead tree to conform to its exact description in the Tolkien novel.  The expensively-reconstructed tree had all of 10 seconds’ camera exposure in the movie’s final cut.

• The same fastidiousness prompted the director to insist on building six chimneys on the roof of one hobbit house, as mentioned in the book, although the movie cameras showed only two of them.

• Questions are encouraged during the interactive tours. Once, our guide recalled, one small girl who had been earnestly listening to his backgrounder on the hobbit holes, piped up:  “So where did Snow White and her seven dwarves live?” That sent the whole group chuckling, while the little girl remained totally mystified.

• To make the cast appear shorter as hobbits, the camera operators shot from several angles and “sewed up” the different shots in the final edits.

• But the tour guide also demonstrated how, by a simple move toward or away from the camera, ordinary folk can make items appear bigger or smaller.  They’re actually camera tricks most of us have used and mastered, as we pretend to be holding Mayon Volcano on our palm, or sitting astride the Eiffel Tower, etc.

• For the “LOTR” movies, 37 hobbit houses were constructed from untreated timber, plywood and polystyrene.

• For the movie’s prequel trilogy starting with “The Hobbit: An Unexpected Journey,” 44 unique hobbit holes were constructed.

• Also worth a shot within Hobbiton are the Green Dragon Pub, the Mill, the double arched bridge and the famous Party Tree where, according to our guide, real wine was served during the shoot of Bilbo Baggins’ birthday party. The result was an uproarious party that had cast and crew singing and dancing well after the scene was over.

• Although Hobbiton is the most popular “LOTR” location site, the movie was shot all over New Zealand. Some of the movie sets are found in Tongariro National Park, whose three volcanoes (Mount Ruapehu, Mt. Tongariro and Mt. Ngauruhoe) became the setting for the dark realm of “Mordor.”  The Southern Alps in NZ’s South Island became the “Misty Mountains” while Harcourt Park some 20 miles north of Wellington became “Isengard.”

• The dark forest where hobbits Frodo, Sam, Merry and Pippin hid under tree roots to evade the Black Rider is actually found in the center of Wellington, an urban enclave that’s actually NZ’s capital.

Countless jump shots and family pictures later, the tour wound up at a fenced-in area where several cuddly creatures made irresistible sheep’s eyes at us.  We soon found out why, when our guide passed around some milk bottles.

“Sheep-feeding time!” the children announced gleefully before finding themselves some wooly babies that eagerly sucked the bottles.  Pictures, pictures and still more pictures.

By now it was lunchtime and we were getting hungry, and regretted how, counter-intuitively, we left the sandwiches we had originally planned to bring. To our delight, we were handed meal vouchers—included in the tour price—that we could redeem at Shire’s Rest Cafe, the restaurant/gift shop that put the period to our tour.  Everyone was given a hot meat pie, an apple and a choice of coffee or soda.  Good enough for a Second Breakfast, we thought, feeling very much like Frodo and Sam.

For our take-home treat, we relished a huge helping of memories and tall tales about short folk.  Not exactly an unexpected journey, but an amazing one amidst the magical incarnation of Middle Earth. •