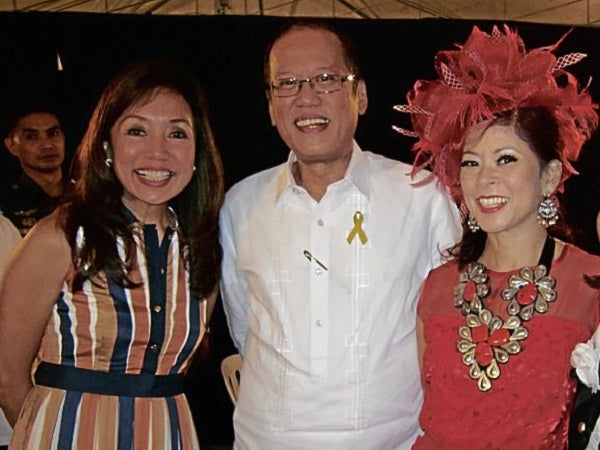 A picture is worth a thousand words, but for some, a thousand words are not enough. That was my feeling at the book launch of “i’m afraid of heights (or why i can’t social-climb),” the new tome of Thelma Sioson San Juan, Inquirer Lifestyle editor and my boss.

The launch at the Rockwell Tent was overflowing with guests, led by President Noynoy Aquino, who, aside from being the keynote speaker, was featured in the book. The President, of course, is not a habitué of the social whirl. It was his two-decade-long friendship with Thelma that convinced him to come.

The book is a compilation of profiles written over Thelma’s long and defining career, from the first piece on P-Noy and Kris when the latter was just breaking into show biz. I was so happy to be featured in the book, in a piece written just early this year, and thereby fresher, so to speak.

Thelma’s true talent is getting the facts right, and blending them with her writer’s flair into an excellent read. Her association with style, infused with the timeless principles of journalism, is the key element that brings the book to life. The book is available at all National Book Store branches.

It must be book season, as just off the press is the new coffee-table book of prominent businessman and philanthropist Jaime Zobel de Ayala. Called “The Creativity of Jaime Zobel,” this book is a compilation of the intrepid photographer’s work over three decades.

It is impossible to be unfamiliar with Don Jaime’s work, as some of them have been featured at the Greenbelt Tunnel along the Ayala Malls.

Speaking of the Ayala Malls, their Christmas campaign is “Wrapped in Love,” with “kindness zones” in the malls for exhausted shoppers and visitors to relax and be pampered. Among the perks are popcorn for all moviegoers, candy bags for kids in the playground, and free concerts by diverse artists, including The Blake, Piolo Pascual, Zia Quizon, Nikki Gil and Lea Salonga.

An original Christmas ballet with Steps Dance Project will be staged several days throughout the season. One of the dancers is Lope Valdes-Lim, the son of Assumption’s creative director, Ana Valdes-Lim.

Partnering with Ayala Malls for the season are foundations like Children’s Hour, Hero Foundation, Ayala Foundation and WWF-Philippines. Children’s Hour is an organization that invites individuals, employees, organizations and corporations to donate at least one hour’s worth of salaries or earnings once a year. Its mission is to promote education, health and nutrition, and protection for disadvantaged Filipino children.

Hero Foundation is an acronym for Help Educate and Rear Orphans Foundation. They provide educational assistance to children of real-life heroes, soldiers killed in action or totally incapacitated while in the line of duty. Hero aims to help these children obtain a college or university degree, or a certificate in a vocational course.

The Ayala Foundation aims to improve the quality of life of the Filipino through social development. Since 1989, the foundation has been helping the Iraya-Mangyan, an indigenous ethnic group in Puerto Galera, become sustainably self-sufficient, especially in the areas of education, livelihood, housing and health.

Finally, WWF-Philippines (World Wildlife Fund) is an organization whose mission is to stop, and eventually reverse, the accelerating degradation of the Philippine environment and to build a future in which Filipinos live in harmony with nature.

Another recent epic tome-cum-photo exhibit was Rupert Jacinto’s “Faaabvlous III” exhibit and “White Nights” book launch, held at The Peninsula Manila. The black-tie event had Vice President Jejomar Binay as guest of honor, and included guests such as Helen Ong and Cris Albert.

The elegant dinner was styled by talented Junjun Ablaza, and several “Faaabvlous” Awards were given to supporters of Rupert’s charities, OFPHIL and the Sto. Niño de Paz’s “Save A Parish” program.

The book was produced in partnership with the Advertising Foundation of the Philippines, and sponsored by The Peninsula Manila, HP, Titania Wine Cellar, Maxi One Productions, Junjun Ablaza, Rochar Cosmeceuticals, Triple R Large Format Co., RJ 100 and Crimson Resort.

Let me end with a blurb about the University of Sto. Tomas’ 10th Christmas Concert Gala. This annual fete is on Dec. 6, 8 p.m., and is reminiscent of the European practice of holding grand concerts in magnificent cathedrals.

Indeed, as in previous years, the musicale will be at the UST Chapel, also known as Santisimo Rosario Parish Church. The esteemed university’s choral performers include the world-acclaimed UST Singers, Coro Tomasino, Liturgikon Vocal Ensemble, and the Hail Mary the Queen Children’s Choir.

Providing accompaniment are the UST String Orchestra, UST Brass Ensemble and the UST Symphony Orchestra under the baton of professor Herminigildo Ranera.