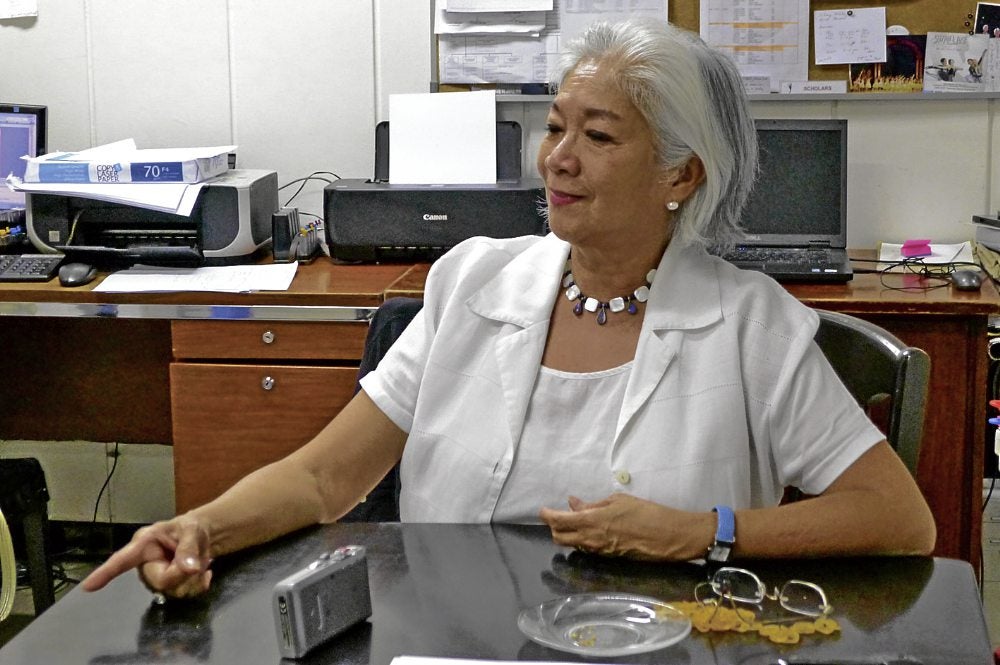 Ballet Philippines is now 43 years old and its humble beginnings cannot be told without its founder, choreographer-dancer Alice Reyes, who is in town for the ongoing run of her “Rama, Hari” until Dec. 9.

Forty-three years ago, Reyes struggled to put up a dance concert by harnessing a few dance enthusiasts. This was the seed that became the CCP Dance Company, later Ballet Philippines.

“When we were starting, I realized I had to involve not only the dancers but also their parents,” she said. “I literally had to implore them to take care of their children’s costumes for the time being. Indeed, we started with nothing but talent and imagination.”

Since her school days, Alice thought that dancing was, for her, the most natural thing to do. After all, her parents were highly artistic people. Her father, Ricardo Reyes, was known as Mr. Philippine Folk Dancer; her mother, Adoracion Garcia, was a voice teacher whose pupils included Imelda Romualdez Marcos.

Born in October 70 years ago, Alice is a Libra and is, in her own words, very positive.

In her 20 years at the helm of the CCP’s first resident dance company, she encountered both joys and challenges.

While the reception was usually good at the CCP, it was even better abroad. In Germany, she and Nonoy Froilan danced Norman Walker’s “Song of the Wayfarer.”

“I just realized that they liked what we did,” she said. “We had several curtain calls but we dancers didn’t have any clue as to the level of euphoria from the audience’s point of view. We already retreated to our dressing rooms and were about to change but our stage director kept on calling, ‘You have to come back. They are still clapping.’ I would say this was one of my unforgettable highlights as artistic director of Ballet Philippines.”

The constant challenge was financially sustaining a 60-member (plus staff) dance company.

“There was a time when I had to call Jaime Zobel for lunch and unburden right there and then that we didn’t have money to pay for the staff and the dancers. We got what we came there for. And Mr. Zobel said, ‘Well, this is a very expensive lunch but here it is,’ as he handed out the bailout fund.”

Former Miss Universe Margie Moran Floirendo has been company president in the last four years. She has to look for money to pay for the dancers and sustain the regular season.

For the record, it involves P30 million a year to sustain a dance company, and this includes production, salaries and employee benefits. Only less than 40 percent of its income comes from ticket sales.

With humor, Moran said she liked to think her arms were gently twisted for the job. “They obviously need fresh blood—not young blood—at the helm of Ballet Philippines. But I am no stranger to dance. I was once upon a time involved with dancing.”

It also helped that she was a producer of theater shows, and that most of them were fund-raising events. At one time, she was the impresario of the Cecile Licad recital in Davao City in 2002.

“We were fortunate that we were able to get sponsors and thus made both ends meet,” said Moran. “Most of the time we broke even. But we were able to pay salaries on time and we were also able to pay allowances for the part-timers. Being president of Ballet Philippines involves taking care of some 50 dancers of BP 1 and BP 2. They log a hundred performances a year.”

She made sure the company books were in order, with income and deficits duly noted. In due time, BP was categorized as a donee foundation by the Philippine Council for NGO Certification. BP is only one of two arts companies enjoying that distinction.

“In other words, sustaining a dance company is not just about passion,” Moran said. “You also need discipline in getting the company’s financial ledger right. We need good accounting to make us credible to the donors and patrons of the arts.”

Moran said it was tough in the beginning but she had since enjoyed the rewards of a purely volunteer job (she is not allowed a salary or allowance in her job).

“When the dancers you help nurture wins competitions abroad, when you see them give their best in performances—these are the best rewards for me. After all, not everything in this world is about money.”

Alice Reyes noted: “I think Margie is the perfect match for the company.”

Reyes said she liked to think that her 1980 “Rama, Hari” was once her baby, and rehearsing it once more after 32 years felt like seeing a favorite grandchild come to life again.

“It is exciting for me because it’s like rediscovering something dear to you and now you are suddenly confronted by how to make it fresh and relevant for the new generation,” said Reyes. “It is interesting to see the same piece now being interpreted by young, if somewhat different, bodies.”

In the initial rehearsals, she was overwhelmed by young energetic bodies.

“The new breed of dancers is just amazing,” she said. “I was just stunned by what they could do with the little studios that are available. When we started here 43 years ago, the offices and resident companies were just us, and we had the basement rehearsal hall to ourselves. Now they are cramped in those little studios but otherwise doing well. Looking at the dancers, I must say they are technically fantastic.”

Alice can certainly look back to enjoy the fruits of her dance pioneering. Forty-three years ago, she started with 40 dancers who appeared in regular seasons.

When she retired from BP 20 years ago, she found work teaching design in an export and design company.

“You can say that, at some point in my life, my choreographic life literally went to sleep while I was doing designs in another field of work.  It isn’t really far from choreography. I also have to tap into my artistry while dealing with artisans and craftsmen. The big difference in this new work is that I don’t have to raise funds,” she said with a big laugh.