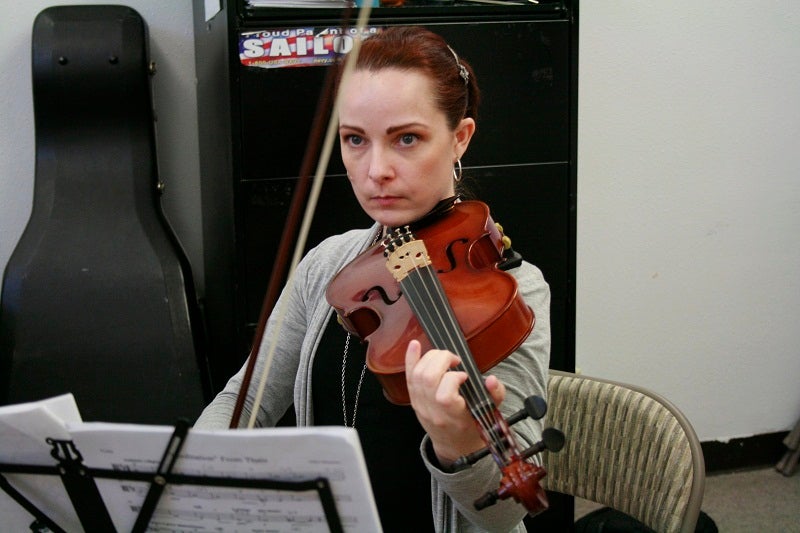 In this Nov. 17, 2012, photo, Sarah Jane Coffman practices the viola with the Hiland Mountain Correctional Facility Orchestra in Eagle River, Alaska. After serving a 14-year sentence for murder, Sarah Jane Coffman, a founding member of the women's string orchestra at the prison in 2003, will debut as a citizen member when the two annual holiday concerts are held Dec. 8, 2012. (AP Photo/Mark Thiessen)

EAGLE RIVER, Alaska— After serving a 14-year sentence for murder, no one would have expected Sarah Jane Coffman to go anywhere near the Hiland Mountain Correctional Center once she was released.

But every Saturday she makes the 10-mile drive with a viola in tow for orchestra practice at the prison just north of Anchorage.

Coffman, a founding member of the women’s string orchestra at the prison in 2003, will debut as a citizen member when the two annual holiday concerts are held Saturday. Acclaimed cellist Zuill Bailey will also perform with the women.

“It probably seems weird to other people,” said Coffman, who was released Feb. 1. “A lot of people I love and care about are here, my friends. It’s almost a little comforting to see them, but I’m very happy to leave when it’s time to go.”

This year’s concert is also a milestone for another founding member, cellist Dana Hilbish, convicted for the 1991 murder of her common law husband in Ketchikan. She received a 60-year sentence, with 25 suspended.

It will be her last performance. Hilbish has been granted parole early next year.

The parole board “could have chosen to release me at that moment, and I was actually hoping they wouldn’t release me before the concert because this is a closing piece with friends that have become family for me,” said a beaming Hilbish.

Pati Crofut, director of the Anchorage-based Arts on the Edge, founded the orchestra nine years ago at the suggestion of a friend, who was the educational coordinator at the prison. Crofut said she took up cello as an adult, and actually played in her son’s school orchestras in the sixth, seventh and eighth grades.

“I ran out of orchestras,” she told her friend, who suggested she start an orchestra at the prison.

Crofut says there were some rocky days in getting the orchestra started, including a revolving door of prisoners in the program.

Since then, rules have been established, including only allowing women with long prison sentences to become members since it takes time to learn how to play a stringed instrument. Orchestra members also have to be working with other rehabilitative programs in the prison, promise to practice and take part in the annual concert, which is a fundraiser to help sustain the orchestra.

The orchestra has grown from eight to 30 members, divided into three separate groups: beginners, intermediate and advanced. The latter, Crofut says, is playing at a high-school orchestra level.

Conductor Gabrielle Whitfield, also an Anchorage public schools teacher, said the Saturday practices at the prison are the highlight of her week.

“They always say the greater a person’s sadness in life, the greater their capacity for joy,” she said. “I totally find that to be true here.”

For the prisoners, the hour-long Saturday orchestra practice gives them a break in their highly structured prison routine. Hilbish said she’s so protective of that hour, she tells people not to visit her on Saturdays.

“The routine is the same, you get up at the same time, everything is the same. With music, it’s going to be different, it’s going to be challenging,” said Coffman, who was convicted in 1997 of stealing marijuana and the murder of the homeowner in Willow, even though she didn’t enter the house. The jury found she was the leader of the people who did, however.

Music gave her “something to focus on besides being unhappy and walking around like a robot,” she said.

Beyond a reward, being in the orchestra gives the prisoners an identity.

“So much of the time in jail, your life is really compartmentalized and very structured, and you have to wear a certain thing and follow a strict schedule, and orchestra is like, ‘Well, I’m a musician,’ and music is a certain kind of freedom, to be able to make music and make music with your friends, so it is really a sense of being free,” Whitfield said.

Whenever anyone outside of prison shows any positive interest in the inmates, Coffman said it helps the women’s self-esteem.

“Sometimes you feel like you don’t matter because you know you’ve done something wrong and this is your punishment, and you don’t really deserve to be recognized, and so when people do, it’s surprising and it feels really good,” said Coffman, who now works for an accountant and is taking classes.

“That’s huge in transforming a person’s life because they want to keep doing that,” she said.