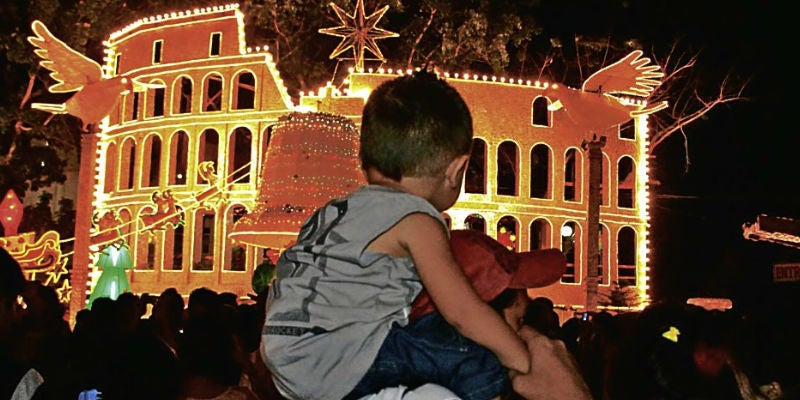 EARLY CHRISTMAS A replica of the Colosseum glitters with lights at the opening of the 20th year of the Christmas Symbols Festival in Tangub City. Over 25,000 people from different parts of Mindanao witnessed the opening rites of the festival on Saturday. RICHEL V. UMEL / INQUIRER MINDANAO

TANGUB CITY—Lighted pyramids and cathedrals, glittering temples and pagodas, glowing lanterns and Disneyland characters—they came together to bathe this city in light and color as the Christmas season officially began here on Saturday night.

The festival is now on its 20th year, and more than 25,000 spectators from different parts of Mindanao came for the opening rites of the 40-day celebration of Christmas.

Jennifer Wee-Tan, chair of the City Tourism Council, said she hoped the glittering symbols of the Yuletide season brought fresh inspiration and a positive outlook to peoples of the region.

The festival has transformed the local government center and public plaza here into a Christmas theme park.

And true to local leaders’ promise of making the festival’s attractions a love offering to the peoples of the region, the organizers charge an entrance fee of only P1.

Impressed by the beauty of the opening presentations, Misamis Occidental Gov. Herminia Ramiro said the festival was not only for the eyes but also for the soul.

“These are truly symbols of love, given the delicate artistry invested in each [symbol],” Ramiro said.

This year’s festival carries the theme “Christmas Around the World,” which explains the famous world landmarks featured in the presentations.

“For the past 19 years, we have shown the many nuances of Christmas in the Philippines. This year, we hope to bring the world here, set amid the Filipino way of celebrating Christmas,” said Vice Mayor Edemar Alota.

Alota said he hoped the theme would deepen Filipinos’ knowledge of various peoples, their society and culture.

The portrayals of world landmarks come as a mix of ancient and contemporary motifs. Reproductions of the pyramids of Egypt and Mexico stand side by side with models of the  Brasilia Cathedral and  Hong Kong Disneyland.

There are also models that represent cultures steeped in meditative practices, like the Lotus Temple of India, a Japanese pagoda, and the Besakih Temple of Bali.

Big crowd drawers on Saturday were the models of  the Temple to Heaven of Beijing, the Colosseum of Rome, the Eiffel Tower of Paris and the Petronas Twin Towers of Kuala Lumpur.

A highlight of this year’s festival is the grand reunion of the  nationally acclaimed Sinanduloy Cultural Troupe, which will present “Dances of the World” on Dec. 22.

Every day, local artists perform for visitors to the park. Tourists can tour the festival’s attractions in calesas or train for a minimal fee.

The festival is actually an art contest in three categories: plaza booths, with 16 clusters of local and national government agencies this year; giant lanterns, with entries from 28 barangays; and Christmas arches, with entries from 27 barangays erected along  the national highway and major roads in the city.

The lanterns adorn Saint Michael Cathedral, the Catholic city’s center of faith, built in the latter part of the 19th century by missionaries bound for Lanao but whose ship was swept to this parts by a powerful storm.

The  arches proclaim the Christmas season’s message to travelers, inviting them to the city and promising them great adventure.

The entries are judged on creativity, uniqueness, artistry, aesthetic appeal and message.

All the entries are made from  materials found in Tangub, a city dependent on agricultural and marine resources like corn cob, rice hull, sea shell, coconut husk, coconut shell, sea grass and bamboo.

The festival had its beginnings in 1992 when the local government set up Christmas booths in the plaza to brighten the area at night.

Mayor Philip Tan said the lights were also intended to help his urban-bred wife, Jennifer, adjust to Tangub’s country atmosphere. He was then just starting out in politics.

To his surprise, Tan said,  hordes of people came to the plaza, inspiring local officials to make the Christmas booths a yearly event.

The festival inspired the residents to employ their artistry, creativity and imagination and they joined contests during the festival.

The festival proved a success and in 2000 the Department of Tourism recognized it and gave Tangub the moniker Christmas Symbols Capital of the Philippines.

The local government is making a bid for the longest festival in the Philippines. The Department of Tourism’s regional director, Catalino Chan, said the festival could even be one of the longest in the world.

Tan said the local government was keeping the entrance fee low to encourage more visitors to come. The organizers raise funds from corporate sponsors, which advertise their services throughout the festival.

Visitors to the park bring business to the food and souvenir shops in the area.

The province has been developing its tourism potential and it now has mountain and sea resorts that offer nature tourism.

Basking in Tangub’s “spectacle of lights” will be a grand finale to a visit to the city, Oaminal said.