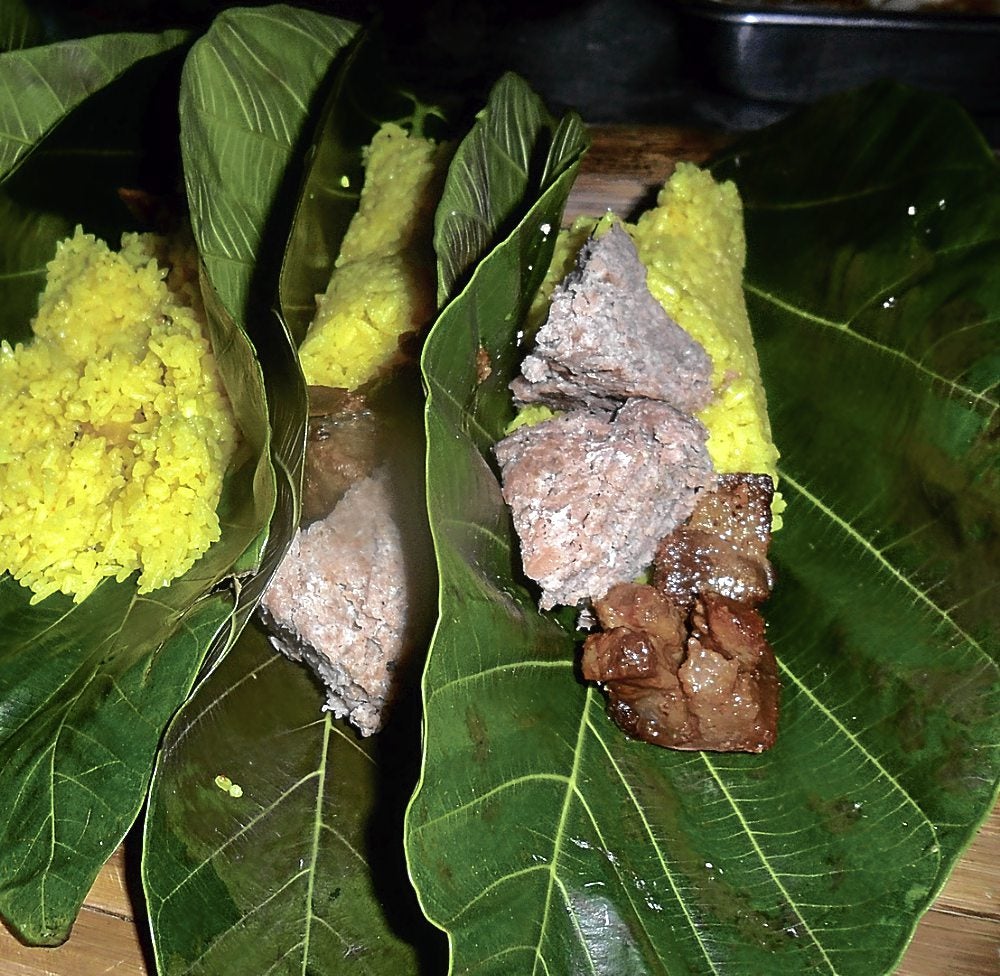 Urban dwellers, myself included, will call their colorful special clothes as costumes. But to the indigenous people (about 500 delegates) that recently massed in Malolos, Bulacan, for an event called Dayaw, organized by the National Commission for Culture and the Arts (NCCA), the clothes they wore were their native attire.

Most were woven, some were beaten from tree barks or had spectacular beadwork and decorative brass bells—all proudly worn.

Apparently the tribespeople were as proud of their food. For three days, I couldn’t believe my luck at witnessing some of our very own ancestral food being done by about 20 katutubo or lumad groups.

Some used ingredients I still have to research on. There was kadiya, which looked like flower buds and was used to perfume a beef dish called sapi of the B’laan of Davao del Sur, paired with lupi, a suman (rice cake), both containing a handful of chopped chili. Or the lumbay leaves cooked with urang (shrimp) by the Ati of Antique.

Some used organic cooking vessels like bamboo, where the Mansaka of Davao del Norte and Compostela Valley cooked their lurot, chicken with tanglad (lemongrass); and also rice, by the Bukidnon-Higaonon people.

For the Tagbanwa of Palawan, two wooden spatulas called gagari were used to spin batter made from ground rice mixed with water, which formed into round pieces while frying. The result is the amik, a kind of doughnut that’s considered food for good luck. The pointed part at the opposite end of the gagari, the dulay matula, is used to punch a hole in the middle so the amik is cooked through.

The wooden spatula was used again by the Palawani of Maguindanao who cooked jaa, batter made from ground rice, water and sugar; the finished product came out like elongated rice crispies. It reminded me of the lokot-lokot of Zamboanga, and the procedure was the same. The batter was poured into a coconut shell with several holes, then the shell was swayed over hot oil, producing noodle-like streams that were shaped with the spatulas. It is celebratory food in the southern part of the country.

Ground rice by hand can be made into a putty-like substance with the addition of water, which is used as main ingredient or as thickener in many of the dishes. The beautiful Yakan ladies from Basilan who demonstrated their kaliya manuk, chicken cooked for rituals, showed how easy it was to mistake the sauce as curry because of how thick it became due to the rice, and because of its yellowish color from the dilaw or dulaw (turmeric).

The dilaw plus two other kinds of ginger were used in the tiyula itum, a Tausug beef soup. These were the ordinary luyang Tagalog and the langkawas (blue ginger), pounded together with tanglad using mortar and pestle to make sure that the flavors from the different ingredients melded perfectly.

The itum (black color) came from blackened coconut meat pounded to powder form. Tiyula itum should be the centerpiece of a celebration, said the cook, and if the dish isn’t there at a wedding that means there is no dowry.

Kakanin or rice cake was expected, and two different groups made the same kind, and with similar names even. The Gaddang made inandila, malagkit (sticky rice) wrapped in alaw leaves, steamed and then sweetened with latik (cooked coconut milk); this is called rarad in Nueva Vizcaya.

Sinandila is the Apayao-Isnag Cordillera version, steamed also but wrapped in banana leaves.

The Ivatans of Batanes seemed to be preparing for a big party. They made a huge volume of yellow rice called supas. The viand was uvud, pith of banana from the part that is buried, scraped then mixed well with pork or fish wrapped in leaves, then steamed. They had also brought luñis, their pork adobo. Those were served on leaves of the breadfruit tree (tipuho) called kabaya.

The showstopper was pinikpikan, chicken soup as done by people of the Cordilleras, this one by the Balangao-Bontok Applai. The chicken was there to be beaten but lightly, which is why the dish got the nickname “killing me softly.” After the feathers were burnt and removed, the entrails were read by the elders to determine if the chicken could be used in the ritual.

To the dish was added the inasin or etag, air-dried salted pork, all boiled to make a bracing ritual food.

There were variations of familiar food. The laing, as cooked by the Tinggian of Abra, used the gabi (yam) stalks rather than the leaves, as done in Bicol. The Ati of Guimaras cooked binakol na manok, but the original uses bayawak (monitor lizard), which was not available that day. The Agta/Itom of Buhi, Camarines Sur, cooked pinangat (taro packets) flavored by talangka (river crab) and steamed on a bed of tanglad.

A bonus was cooking from lowland areas not populated by indigenous people. These included a cookie from Bulacan called gurgurya that takes its name from coral and uses kalumata leaves to impart a flavor of licorice to the sugar coating; plus hamon Bulakenya (both recipes of the late Mila Enriquez).

These dishes all tasted so good, possibly from the pounding that brought out the flavors, the ingredients used—and the goodwill that food you are proud of always imparts. I just hope it wasn’t because of the commercial enhancers or MSG that some of them used.