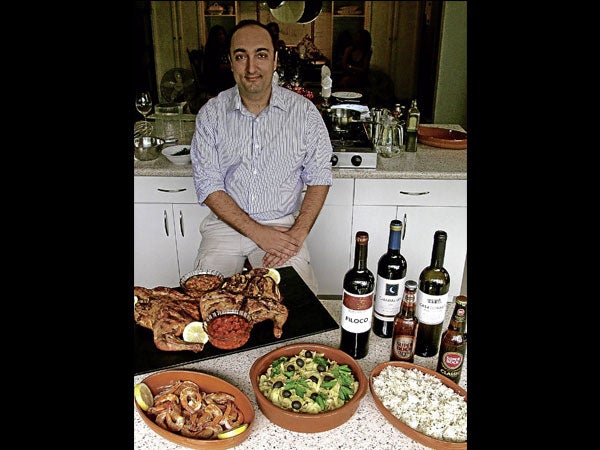 I had the most wonderful meal at Xavier School’s First Saturday Market. It’s amusing to think that some of the best culinary experiences we’ve had centered on  dishes that were simple.

Take, for instance, the delectable chicken dish I had, which was well-marinated for 48 hours and grilled for 45 minutes, Portuguese-style. The cooking must have been  flawlessly executed so that the chicken was soft and moist on the inside, with flavorful charred bits of crackling skin.

The grilled chicken was served with mouthwatering piri-piri sauce (mild or spicy—a blend of peppers, chilies, herbs and spices, soaked in olive oil and allowed to age and mellow over time) and a tasty black olive-flavored rice.

So simple yet so unforgettable!

João Branquinho is responsible for the meal that left me craving for more. When I learned that he caters, I booked him for Monday lunch and I asked him to prepare a typical Portuguese menu. He cooked bacalhau a bras (codfish), frango no churrasco com piri piri (grilled chicken), gambas com piri piri (grilled prawns) and black olive rice.

João is from South Alentejo, Portugal. With pride, he said that his native region he is full of history, excellent gastronomy and empty beaches. “We produce very excellent wines, olive oil, Iberian pork, hams; and the region is very rich in marble, which is my family’s main business.

“I moved to the Philippines in 2009 with my Filipino-Chinese wife Stephanie. I felt it was the right time; the country was filled with promise. Not knowing what to do exactly, I started importing Super Bock, Portugal’s most famous and multi-awarded beer, blending the southern Portuguese barley with German hops and northern mountain water.

“In fact, the chicken was something I came up with so I could sell more beer. It was an experiment I did at an event in Rockwell, in April 2010, for Father’s Day. Luckily, the people enjoyed the food, particularly Elbert Cuenca and Raffy David (I owe them a lot) who loved the chicken and asked if I could cook for their car-wash event.”

It was a success, as there couldn’t have been a better formula—men, cars, beer and freshly grilled chicken with spicy piri-piri sauce!

As he was cooking, João regaled us with his stories. At half past 12, lunch was served. His cooking style was evident in every dish—simple fare cooked to perfection by drawing out the best quality from every ingredient.

The whole spread was exceptional. The bacalhau was not only tasty but also  had a nice texture; the chunky bits of fish and the fried potatoes made all the difference.

The gambas was to die for—the shrimps were soft, tasty and juicy, even when cold. All these were topped with mouth-watering piri-piri sauce.

When the chicken was finally taken off the grill and served, João uncorked a bottle of Portuguese wine, a Filoco Duoro Tinto that he imports exclusively. Even the wine turned out to be a very pleasant surprise—one of the best wines of the season for me! At P450 a bottle, it is clean, easy to drink, light, with “no sharpness,” has a nice finish, and leaves no heaviness. It is a beautifully tinged red that can be had for lunch.

Monday lunch turned out better than I expected. With João’s cooking, the ordinary becomes extraordinary!

(E-mail João at [email protected] and have him cater your Christmas parties for a merry and tasty Portuguese-style Christmas.)

1 kg salted cod cut around eight fillets; João gets his from Cash & Carry.

6 large potatoes, boiled until soft, skin on and peeled, cut to large cubes

6 hard-boiled eggs, sliced in half

Rinse cod and soak for 24 hours submerged in water in a bowl, with several water changes.

Put the bacalhau in a pot.

Submerge the fish in water.

Drain cod, remove the bones and excess skin. You may leave the rest of the skin on; remember not to flake the bacalhau, they should be in large chunks, about 2 x 2-inch chunks.

To arrange: Divide a large platter in four. Each ingredient should be laid on the same platter, but separately. On one side, arrange the cabbage; beside it, the fish; beside the fish, the eggs; beside the eggs, the potatoes.

Sprinkle parsley only over the potatoes to garnish.

To make the sauce: In a pan, heat olive oil and cook garlic until almost brown.

Off the fire, add vinegar and mix well.

You can put some chopped coriander on the sauce.

Transfer sauce to a bowl and serve on the side with bacalhau.