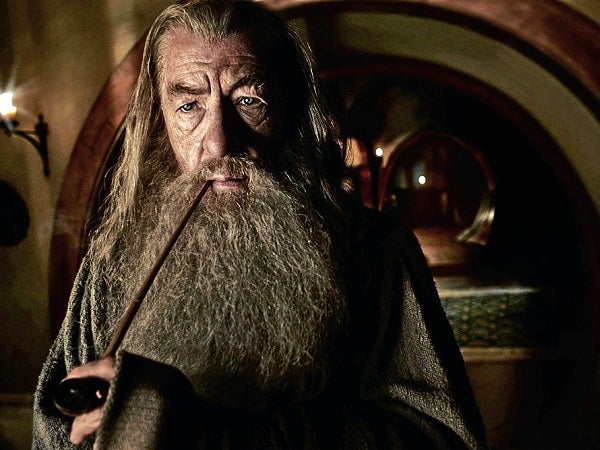 A film based on “The Hobbit” has been on the cards since “The Lord Of The Rings” trilogy. Did you ever think it would actually happen?

You just keep your own sanity because, you know, I do have a life outside Middle-earth. There were many ups and downs, and there was a bit of a relief when there was finally a start date and we could get on with it.

Did you ever have any trepidation about returning to play Gandalf?

Not trepidation, but it would have been more exciting to have been playing a new character altogether.  Going back over old territory is perhaps not as enticing as a new landscape. Also, it meant being away from home for two or three years. It was a big commitment. But, in the end, I couldn’t really bear anyone else to be playing Gandalf, and I’ve heard from quite a lot of people who would have been quite upset if I hadn’t played him. So there were many, many positives. It was lovely to go back to New Zealand. I do think these are wonderful films, so to be involved again is … it all now seems inevitable.

Was it different going back to play Gandalf the Grey, rather than Gandalf the White? He’s a slightly more mischievous figure.

Peter and I both prefer “Gandy,” Gandalf the Grey.  There is more variety to him, and he’s a bit more humane. You see him in different situations, whereas Gandalf the White is very focused and has got a mission to accomplish.  He’s a bit of a commander, not many jokes from Gandalf the White.  So old Gandalf the Grey is a comfortable character to be around and fun, yes.

What’s Gandalf’s development here? He starts off playing a sort of trick on Bilbo but then gets into darker territory.

Well, it’s not a trick! He says to Bilbo, as he’s encouraging him to get out of his staid ways, “This will be good for you,” and, in a sense, it is. There’s always danger when adventure’s involved, but Gandalf wants to see him living a more fulfilled life. Gandalf met Bilbo for the first time when he was a little boy and is appalled when he arrives years later to discover the little boy’s grown up to be a bit of an old stick, a bit of a recluse.  So, the arc of the character is that Gandalf is there helping these Dwarves, and you discover, which you don’t really in the book, why he’s helping them. I mean, why would you help a lot of Dwarves get their stolen treasure back? No, Gandalf worried that Middle-earth seems to be moving. There are rumors; there’s danger in the air; there are signs of dark times to come. He thinks that if he can monitor this journey of the Dwarves, he might get a better sense of what’s happening beyond that particular quest.

And so you see him, again, which you don’t in the book, visiting areas in Middle-earth on his own while the Dwarves get on with their adventures, and we see Gandalf trying to piece it all together, which does lead on to “The Lord Of The Rings” films. But the arc of the character, as ever, is that he’s a guide, he’s a counselor, he’s a helper, he’s a facilitator. He enjoys fun; he likes his pipe and his drink, and he loves the Hobbits, loves his fireworks. But he’s also a politician and a Wizard who has the responsibility, which he takes seriously, of caring for Middle-earth. You see that side of his nature as well. So it’s a fully rounded character, and perhaps we get to know his motives for doing what he does in a way that we don’t in the book “The Hobbit”, so the Gandalf character is explained a little more.

Do we see, in this first film, Gandalf with the other Wizards?

I think it’ll be the first film that all three Wizards appear.  Grumpy old Saruman and Radagast who’s extremely eccentric, but Gandalf likes eccentrics!  And they’re helpful to each other.

What sort of tone will the film have? Obviously there’ll be a lot of lighter moments, but are these films going to tie in tonally with “The Lord Of The Rings” trilogy?

I think that was the issue, having filmed “The Lord of the Rings” first: How do you link them? Peter was often saying, “I want this to be funny, I want this to be light-hearted,” and I was sometimes saying, “Hmm, I don’t know.  This is a very serious situation for Gandalf.” He’d say, “Yes, but we must tell the story in a light-hearted way.” You can tell from the casting that he wanted more comedy. He’s got great comedians, like Barry Humphries and Bret McKenzie and Sylvester [McCoy]. Plus Martin Freeman, who has got a wonderful strain of comic sense, and a lot of the Dwarves. There are going to be a lot of laughs along with a lot of adventure, but then interwoven with this a sense that there is a world elsewhere where danger abounds and we have to be careful what we’re doing.

How has Peter Jackson changed over the years?

I don’t think he has.  He wears shoes now, which he didn’t use to do! No, his temperament is very much the same; he’s older, of course, but I wouldn’t say he’s slower.  His energy levels are amazing. Maybe he’s more assured, but he’s always put on and presented a positive face. What goes on inside, I don’t know.  I mean, if you’ve won a number of Oscars for your film and you’re now making a prequel, does that make it easier because you’ve had such a success or does it make it more difficult knowing that you have to live up to it? But he doesn’t share those fears or worries, if he has them. On set he is very much the guy in charge.  But it’s Peter, he’s a Kiwi, he’s a friendly man.  There’s no side to him, there’s no neurosis, and he can easily be distracted if you take him some toy to show him or a funny picture, or tell him a funny story.  He’s very good company.