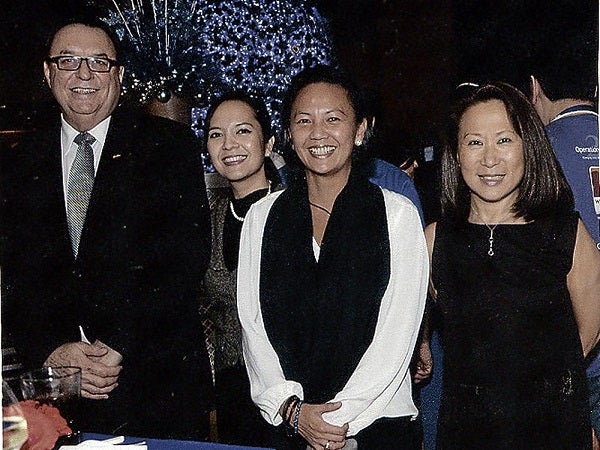 Thirty years ago Dr. Bill Magee and his wife Kathleen, a nurse, came to the Philippines on a medical mission. They led a team that operated on children, and some adults, with cleft lips, cleft palates and other facial disfigurements in Naga City.

The turnout of patients was a staggering 300 and they could only operate on 40. The parents begged, and so did the local nurses, for them to return for the next five, or even 10, years.

Thus was born Operation Smile, which now covers more than 60 countries in six continents. Operations have been performed on more than 200,000 patients worldwide.

Operation Smile came to Cebu 15 years ago under the aegis of Mariquita Salimbangon Yeung, who established the MSY Foundation in Cebu 20 years ago. It holds medical missions throughout Cebu and supports numerous civic and scholarship projects.

Mariquita counts with Monette Aliño as the MSY Foundation’s executive director. Much efforts go to diffusing information to health centers in every barangay about the annual Operation Smile activities, and that can even extend to neighboring provinces in the Visayas and Mindanao.

Many organizations, entities and individuals have rallied for Operation Smile. Mariquita herself admits that what she thought would be a project for a few years has become bigger and bigger with each passing year. “It will go on for as long as I live, and even beyond,” she has said.

This year’s 30th anniversary of Operation Smile has “The Journey Home” for its theme. For over 60 plastic surgeons, nurses, dentists and volunteers who came to Cebu from abroad, home for a whole intensive week was Radisson Blu Hotel, which sponsored their stay throughout.

General manager Lyle Lewis rolled out the red carpet for them, and more. On the day of their arrival he hosted a grand welcome party at the lobby lounge for all the delegates and the MSY board of directors.

Mariquita Yeung was present, of course, exhorting all that it was time to have a bit of fun. She took this opportunity, with her brother, Rep. Ben-Hur Salimbangon, to present a plaque of appreciation to Radisson Blu Hotel. On hand was Mr. Lewis along with Elizabeth Sy, president of SM Hotels and Conventions, and VP Christina Bautista.

Monette Aliño announced that there was something special for Mariquita, and would she please come up front and open a mysterious package? She pulled the ribbons to reveal the first issue of a magazine with her name—Mariquita—edited by son-in-law Chris McKowen.

Forming a semicircle around Monette and Mariquita were board members Ben Hur, Cesar and Fely Salimbangon, legal counsel Joje Decal, and Flor Ynclino. Others joined them to form a chorus that sang new lyrics to the Platters’ “Remember When.” We did manage fairly well with “choowap, choowawap.”

The magazine of which there is just one issue available is a veritable document on Mariquita’s charitable involvements interspersed with personal vignettes and photos. “We’re going to distribute the copies after some fine-tuning,” says Monette.

The program continued, hosted by Jude Bacalso, with Christmas songs from Cha-Cha Blanco under the watchful eyes of proud hubby Jigs Arquiza.

We went one day to see for ourselves. There was Edna Salimbangon at the registry table, Dr. Bill and Kathleen Magee, Dr. Vivina Yrastorza at the post-operation area, Meren Gepilano coordinating the food station and Dr. Tina Jordana, who led the Cebu group of dentists.

A press conference was held. First to speak was Bobby Manzano, president of Operation Smile for the Philippines. In the panel were Dr. and Mrs. Magee, Dr. José Antonio Quitevis, Dr. Vivina Yrastorza, Dr. Barbara Sokol and Dr. Willy Go. He said that when he first joined Operation Smile he thought it would be his last, but here he is with 140 operations to his name and still counting.

The Magees had some touching stories to share, especially about patients of 30 years back who had come to their missions to thank them for the tremendous change in their lives as children and adults.

One girl from Silay City came to tell them,” I wanted to be a nurse, but how could I when I could not even speak? Now I can, and I am a nurse.”

As they do every year, Carlos and Mariquita Yeung kept open house every night while Operation Smile lasted. One special evening, it was to celebrate the birthday of Cesar Salimbangon.

There was a full moon above, a band to play dance music up to midnight and a fired up oven issuing delicious pizzas. There was a beeline for the one made with cheese, mushrooms and cream of truffles swished on top.