In the thick of my Christmas shopping–‘pakyawan’-style | Inquirer Lifestyle ❮ ❯ 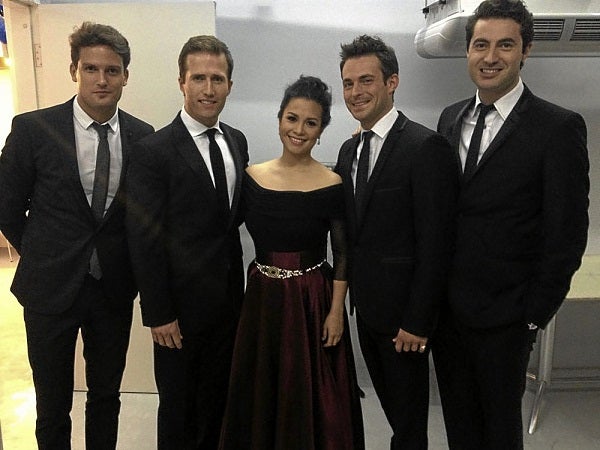 In the thick of my Christmas shopping–‘pakyawan’-style

The second advent candle has been lit. As we get deeper into the Christmas season, the nearness of Christmas Eve frightens me because my long Christmas list has very few checkmarks.

I have decided to just do the pakyawan-style of shopping, buying many of a certain product for the majority of friends and acquaintances. This is not a unique way of shopping at all, and many friends do exactly the same thing. I remember when I was young that my cousins and I would all get the same flashlight or blouse or whatever. Indeed, pakyawan shopping has historical roots.

Special people, like my hubby Dennis, need not worry that he will receive the same candelabra as a cousin might get. He gets onto a special list, where I go to one manufacturer for a variety of presents.

Recently, Samsung Electronics Philippines revealed its latest products to an appreciative audience at the Marriot Hotel’s grand ballroom. After dinner and entertainment by the Manila Philharmonic Orchestra under maestro Rodel Colmenar, the Samsung Galaxy Note II and Galaxy Camera were unveiled.

Coco Domingo, Samsung product marketing head, was assisted by his managers Mylene Gabriel and Ien Rivera for the show. The Galaxy Camera boasts of unparalleled connectivity. The device is 3G/4G enabled and has full Internet browsing support and over 600,000 apps to choose from, running on Android 4.1 or Jellybean. It is definitely a snap-and-upload camera, allowing for real-time sharing.

Meanwhile, the Galaxy Note II brings the word “phone” to a new level. The device allows for multi-tasking on the web, having multiple windows open simultaneously. The Pop-Up note feature allows users to scribble a short note anytime, even during a phone call.

Beauty queens Venus Raj and Shamcey Supsup were invited on stage to demonstrate the Samsung Galaxy Note II’s “Best Face” features. Coco took various pictures of the two beauty queens, after which they could choose their most preferred face from all the group shots.

Another special group of friends has gotten concert tickets from me this season, especially as there have been so many great shows to choose from. I took a bunch of Assumption College classmates to enjoy the sold-out “J.Lo: Dance Again World Tour” at the Mall of Asia Arena.

Sponsored by PLDT Fibr, the future of broadband and the fastest Internet connection in the country, the J.Lo concert was an explosion of sound, dance and color. J.Lo herself was beyond glitz and glam, and her stepped-up choreography made it an exciting evening for us girls.

The “J.Lo Dance Again World Tour” kicked off in Panama last July and will end in Puerto Rico next year. Over a hundred PLDT Fibr subscribers were able to make it to the J.Lo concert, all winning via an electronic raffle.

If you are on a tight Christmas budget, head to Trinoma on Sunday for a free concert called “Kindred Voices,” with Blake and Lea Salonga, accompanied by the ABS-CBN Philharmonic Orchestra. Lea’s brother Gerard Salonga is its musical director and Floy Quintos is stage director.

The Ayala Malls are delighting shoppers with free concerts, and Trinoma is the last leg of the mall concert tours. This isn’t the Blake singers’ first time in Manila, and they are truly enjoying Pinoy hospitality.

Philippine Tatler editor Anton San Diego has been instrumental in introducing these handsome crooners to all the ladies here. As their local manager, Anton has also brought them to Cebu to perform and enjoy some R&R.

I remember our family was the Christmas issue cover of Tatler magazine one year. This year, the cover features the lovable family of Dodot and Mikee Jaworski with their handsome boys. The issue also has an article called “Dear Santa,” where children tell their Christmas wishes, while another piece goes into the origins of Christmas in the Philippines.

Among the special people who will get special gifts are those who will get fragrances. Again, there are so many to choose from but the new arrivals deserve a look.

Valentino elegantly launched its newest fragrance “Valentina” at an intimate lunch at Las Flores Restaurant. After smelling all the different notes of the fragrance, I am sure this one is for keeps.

Of course, younger nephews and nieces will all get boxes of Magnum’s Choco Capuccino, the newest flavor of the sell-out ice cream. The sensation now has a total of four flavors, including Classic, Almond and Choco Truffles.

Last month, the ice cream bar was launched in Cebu. The elegant affair was held at the posh Loft, designed by Alex Medalla, with Kenneth Cobonpue accents. Magnum brand ambassadors Raymond Gutierrez, Erwan Heussaff and I hosted the party, and Manila personalities like Kelly Misa, Bubbles Paraiso, Bianca Valerio and Tim Yap, to name a few, all joined in to party with the Cebuanos.

Opening the event was Brian Chanyunco, Magnum brand manager, who welcomed guests and thanked them for their unwavering support of the Magnum brand. Sultry singer Catriona Gray provided entertainment.

Magnum also supported the Manila Invitational Underwater Hockey Tournament at the beginning of December at Rizal Memorial Stadium. The one hundred players from Australia, the US, Singapore and other countries were delighted to get a welcome break from the sporting competition.

My hubby Dennis was on the Philippine Men’s Team that garnered a silver, finishing second to Australia. The country won gold medals in the Women’s and Mixed competitions. I’m glad Magnum was there to celebrate with the athletes.