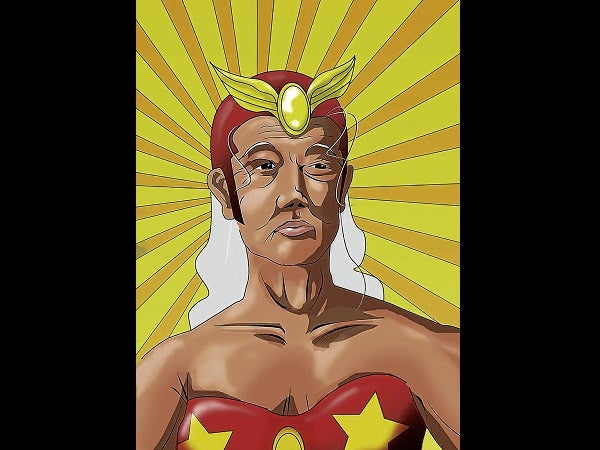 Time for one of the most enduring of Filipino comics characters—Darna!  A circa 1947 creation by the iconic comics writer Mars Ravelo, Darna possesses the sex appeal of a Venus, the handsomeness of an Apollo and the strength of a Samson.

Her signature emblems are the wings on the skull cap and her tight, two-piece “swimsuit” with a pair of stars on its bra. They say Darna was modeled after the US comics’ Wonder Woman whom, by the way, she antedated.  And her costume has a characteristic that is distinctly Pinoy—a piece of long narrow cloth hanging from the front of her belt to de-emphasize her private parts. An abbreviated Filipino tapis!

Narda and her younger brother Ding are beggar children (pulubing magkapatid) who live with their grandmother.  One day, while playing hide-and-seek with her playmates, a giant shooting star heads straight for Narda.  It deposits a dazzling white pebble at her feet.  The word “Darna” is inscribed on it.  Quickly, Narda picks up the stone and, fearing her playmates would grab it from her, puts it in her mouth for safekeeping.  But she inadvertently swallows it, and falls into a swoon.

When Narda regains consciousness, she is home.  Her grandmother and her brother Ding want to know what happened.  Narda tells them about the star and the magic stone that she has accidentally swallowed.  A name is written on it—oh yes, DARNA!  As soon as Narda pronounces the name, she transforms into a full-grown woman complete with costume. The magical creature assures the two that “I am still your same old Narda.”  Once she says her own name, she becomes Narda, the beggar child again.

Obviously the inversion of Narda’s name into Darna invokes a force from beyond that inverts the existing order.  The poor weak girl becomes the mighty Darna.  Eventually Darna becomes known as the defender of law and justice for the poor—the masa’s coping mechanism.  Whenever Narda needs to transform, she calls her brother for the stone.  “Ding, ang bato!” would become the catchphrase for fans of Darna comics and movies.

Darna’s first encounter is with an ugly kapre who has come down from his balete tree and is wrecking all the nipa houses in the neighborhood.  Darna makes short shrift of him.  Most of Darna’s other antagonists are strong women who belong to the dark side.  They are Valentina, a Medusa-like creature with snakes growing from her head; Ang Babaeng Linta, who has a long ugly leech for a nose; Ang Babaeng Lawin (Eagle Woman); Impakta (Evil Spirit); Ang Babaeng Tuod (The Wooden Stump woman); and The Planet Woman.  Also, assorted giants and muscle men.  No one wins against our heroine.

Tagalog comics’ fictional villains always show the Pinoys’ soft, sentimental side, an experience of rejection because of a physical defect that makes them turn their back on society. For instance, the handsome young man Eduardo, whom Valentina has snatched from his sweetheart, asks her, “Why do you want to eradicate mankind when you are a human being yourself?”

“Me? A human?” counters Valentina, and describes how she has often been vilified and rejected as a playmate, and later on, as a lover.  “Because of those snakes!” says Eduardo.  “They make people uneasy.”  “Yes, they are frightful,” says Valentina angrily.  “Therefore I am not a person, I am a snake—a snake!”

Some of Valentina’s detractors are religious fanatics, such as a group defending a fake angel in one of the episodes.  The framework is always a narrow-minded community delighting in gossip and rejecting anything that is different.  But it is too late.  The villains have suffered too much.  They can no longer be reintegrated into society.  They are raging for revenge.  It needs a Darna to defend humanity against them.

Darna has been made into a movie at least 15 times, once into a ballet, and once into a Bench show.  She is often incorporated into pop fashion.  Darna is the subject of books, articles and specially paintings.  Mars Ravelo’s Darna is the first social realist artwork in the Philippines, says the dean of a school’s art department.  Darna is a strong fighting symbol of Filipino women, replacing the demure, baro’t saya-clad Mother Philippines of old.

Darna is now about 75 years old and is a perfect muse for the “Stimulating, Sage and Sexy” Senior Page of the Inquirer, di ba?