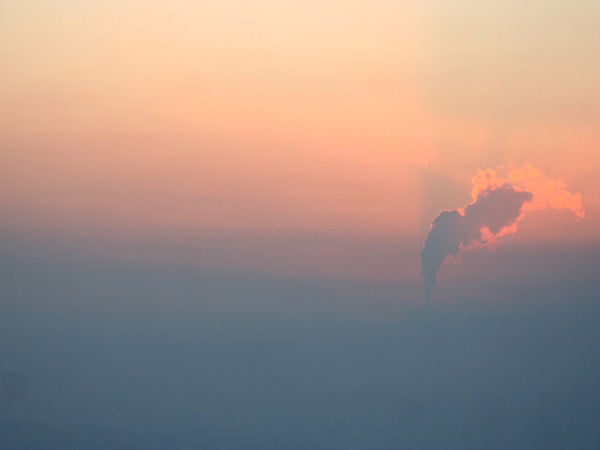 This picture taken on December 17, 2011 shows smoke rising from a smokestack above the smog over the capital Ulan Bator. AFP FILE PHOTO

ULAN BATOR – On the streets of Ulan Bator a people renowned for their horse riding skills have to contend every day with ever more Hummers, Land Cruisers and Range Rovers.

Mongolia’s vast open steppes and deserts stretch for hundreds upon hundreds of kilometers (miles), and it has the lowest population density of any country in the world.

But with its economy rocketing on the back of a mining boom the capital is the planet’s second most polluted city after Ahvaz in Iran, according to the World Health Organisation, and suffers from dire congestion.

Now the authorities hope to alleviate the gridlock by spending more than $200 million on a bus rapid transit system (BRT), in the hope that commuters can be tempted out of their vehicles.

The hulking cars filling the streets are a symptom of the country’s economic rise as it cashes in on its vast reserves of coal, copper and gold.

GDP growth hit a record 17 percent last year and is still steaming ahead at 11 percent now, despite the effects of a slowdown in China, its main trading partner.

Now Ulan Bator has more than 210,000 registered vehicles, almost quadruple the number in 2006.

Each morning, Batsukh Gerelmaa bundles up against sub-zero temperatures for a rattletrap trolley bus ride from the city’s southern fringe to its northwest districts that is only six kilometres long but takes up to an hour to complete in frustratingly start-stop traffic.

There is no way around the cold and uncomfortable journey, says Gerelmaa, an accountant for a local shoe distributor. Taxis costs too much and are just as slow.

“Sitting on that bus is so cold, I am practically frozen by the time I get to work. It shouldn’t take so long because it’s not that far, but the morning traffic is always bad,” she said.

Many Ulan Bator denizens prefer to walk in the city center, as taxis and buses get snarled in traffic. But for businessmen and women in freshly pressed suits or high heels, pedestrian progress is not always the best option.

“Walking is sometimes better than dealing with the traffic, but by the time I get to where I am going I am covered in dust,” said Gerelmaa.

Road crews, construction sites and traffic on unpaved back roads all kick up fine Central Asian silt in the warm months from April to October.

But coal combustion is by far the biggest contributor to the smog as yurt-dwelling residents on the outskirts vigorously burn it to keep warm in winter temperatures as low as minus 30 degrees Celsius (minus 22 degrees Fahrenheit).

Nonetheless according to one study by the National University of Mongolia, motor vehicles contribute eight to 10 percent of particulate matter.

The Asian Development Bank (ADB) is supporting the BRT project with a $217 million loan and Shane Rosenthal, its deputy country director, said: “As the economy grows and traffic congestion increases, there is great potential for an investment like this to have a substantial and positive impact on respiratory disease — considered a leading cause of death in Mongolia.”

Only BRT buses will be allowed to use the 14 kilometres of dedicated lanes running down the centre of the city’s main north-south corridor, so they will not get jammed in the usual stream of cars, trucks and local buses.

Work on the first section is due to start in spring and later phases will see the system expand to 64.5 kilometres, says the ADB.

The state-of-the art vehicles will be a significant leap forward over current public transport options, a motley collection of battered Soviet-era buses and some newer South Korean models.

They will be heated in winter and should cut suburban residents’ commuting times by as much as two thirds.

“In terms of operating costs, BRT is cheaper than rail systems and can be built in a small number of years. Constructing a rail system would take a decade or more” and cost at least 20 times as much, he added.

In the meantime, Ulan Bator’s mayor Bat-Uul Erdene has tried to control the traffic problem by restricting vehicles based on their licence plate number.

Since September, cars with plates ending in one and five have been banned on Mondays, two and six on Tuesdays, and so on.

Damdin Amgalanbaatar, a 62-year-old retired soldier who drives an informal taxi to make ends meet, says the mayor’s scheme has helped, even if it forces him off the road one day per week.

“My plate ends in four so I cannot drive on Thursdays but for me it’s OK. It forces me to take a day off so I have more time to spend with friends and relatives.”

The payoff has been an easier workday, as lighter traffic means quicker transport times and more fares, he added.

“Before I could only get a few passengers because I spent most of the time sitting in traffic, not going anywhere.”