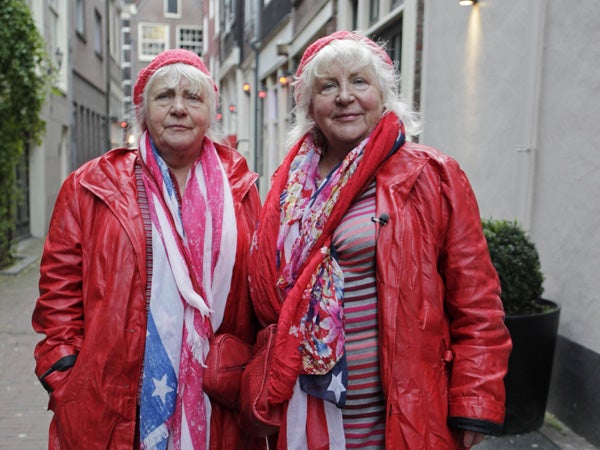 Prostitutes Martine (L) and Louise (R) Fokkens, 70, walk around the red-light-district of Amsterdam on November 15, 2012, the Netherlands. Twins Martine and Louise Fokkens, nicknamed the 'Queens of the wallen', are Amsterdam's oldest prostitutes, having worked for fifty years in the city's red-light-district, and they have wrote two books about their experiences. AFP / ANOEK DE GROOT

AMSTERDAM – In a busy passage in Amsterdam’s red light district a crowd is gathering as fans jostle to have their picture taken with the city’s most famous great-grannies: Louise and Martine Fokkens, the Dutch capital’s oldest twin prostitutes.

Decked out in matching red leather jackets and boots, red jeans and crocheted red berets, with Stars and Stripes scarves draped around their necks, the Fokkens cut a jaunty pair as they saunter down alleys with red-framed windows where semi-nude ‘working women’ put their bodies on display to lure customers.

Locals young and old line up for a chat, while gawking tourists look on in bemused confusion.

“Look it’s the ‘ouwe hoeren’ (old whores),” Koen Booij, 19, shouts affectionately before running up to Martine, who hands him an autographed postcard advertising the sisters’ latest tell-all book about Amsterdam’s seedy side, where the Fokkens have been working as prostitutes for the past half-a-century.

Since the early 1960s, first Louise and later Martine have been plying their trade around the infamous “Wallen” (Dutch for ‘canal banks’), the world’s best-known red light area.

Today,  there are an estimated 5,000 to 8,000 active sex workers in Amsterdam – but only a fraction do business from behind the around 370 “frames” in the area, according to the city.

Now 70, the sisters shot to fame last year when a documentary – aptly titled “Ouwehoeren” and translated as “Meet the Fokkens” about their lives, played to critical acclaim at Amsterdam’s International Documentary Film Festival.

The film was such a success that it was screened again at this year’s recent festival.

Two tell-all books – one has already been translated into English, French and other languages— about the sisters’ lives behind the red curtain followed.

A regular slot on a late-night sex-and-drugs talk show on Dutch television since October has cemented the twins’ celebrity sex-worker status.

Their second book, “Ouwehoeren op reis” (Old Whores on a Journey) has just been released.

Publisher Bertram en De Leeuw told AFP that tens of thousands of copies of the two books have already been sold in the Netherlands, propelling them into the Dutch bestseller list.

The Fokkens sisters – both great-grandmothers several times over – say they have seen it all: in the city where prostitutes have been selling their bodies to visiting sailors and other thrill-seekers since the 15th century, very little can still shock them.

“From fathers bringing their sons for a ‘first-time experience’ to those with a more kinky streak, you get all sorts, ” Martine told AFP, sitting on the bed at the back of her “window” on the Oude Nieuwstraat, a small alleyway that lights up in neon red as soon as the sun goes down.

“We have slept with more men than you can count,” cuts in Louise, sharing a look with her sister before they both burst into laughter: “We had some great fun with the men.”

They ran their own brothel for a number of years and were responsible for starting their own trade union for sex workers long before the Dutch government legalised prostitution in 2000.

Two years ago, Louise finally hung up her stiletto boots because of arthritis – “You can’t get into those sex positions”, she says, while Martine still works once or twice a week, including Sundays, specialising in soft-core bondage for the older gentleman.

— ‘The girls used to look after each other. No more’ –

“I saw them on TV. I think they are fantastic,” adoring fan Booij told AFP as he patiently waited to have his photo taken. “They answer the questions our parents can’t.”

“They’re the real deal,” said Jeanine, 20, a student at the University of Amsterdam who declined to give her second name, as she asked an AFP reporter to take her picture with the sisters on her mobile phone.

“They tell guys how to treat women properly,” she added.

The sisters themselves seem surprised to have so many fans, but their words on love and relationships ring true – born of their own years of experience.

Despite their jolly demeanor and portrayal in the media as two eccentric Dutch aunts who just happen to be in the sex industry, their own story of personal hardship and abuse is never far below the surface.

“We had no money. My husband told me I had to go and work ‘just for two years’,” Louise said, her face hardening slightly as she remembers. “I didn’t know what kind of work he meant. Now it’s 50 years later.”

“In the beginning it was really tough. You shut your brain down. In later years, it got better,” she added.

Rampant violence and exploitation prompted the twins to set up the first trade union for sex workers in the area called the “Little Red Light.”

Asked whether they regretted anything about their lives, both sisters shook their heads: “We regret nothing except the fact that the red light district is changing.”

“There is no code of honor any more, passed from one generation of working girls to the next,” Louise said with a look of disgust.

“Today’s girls wear almost no clothes. They deal and do drugs. It’s about crime and money. No self-respecting prostitute does drugs,” she said.

“In the olden days the girls used to look after each other. No more. The human feeling has left the red light district,” she said.