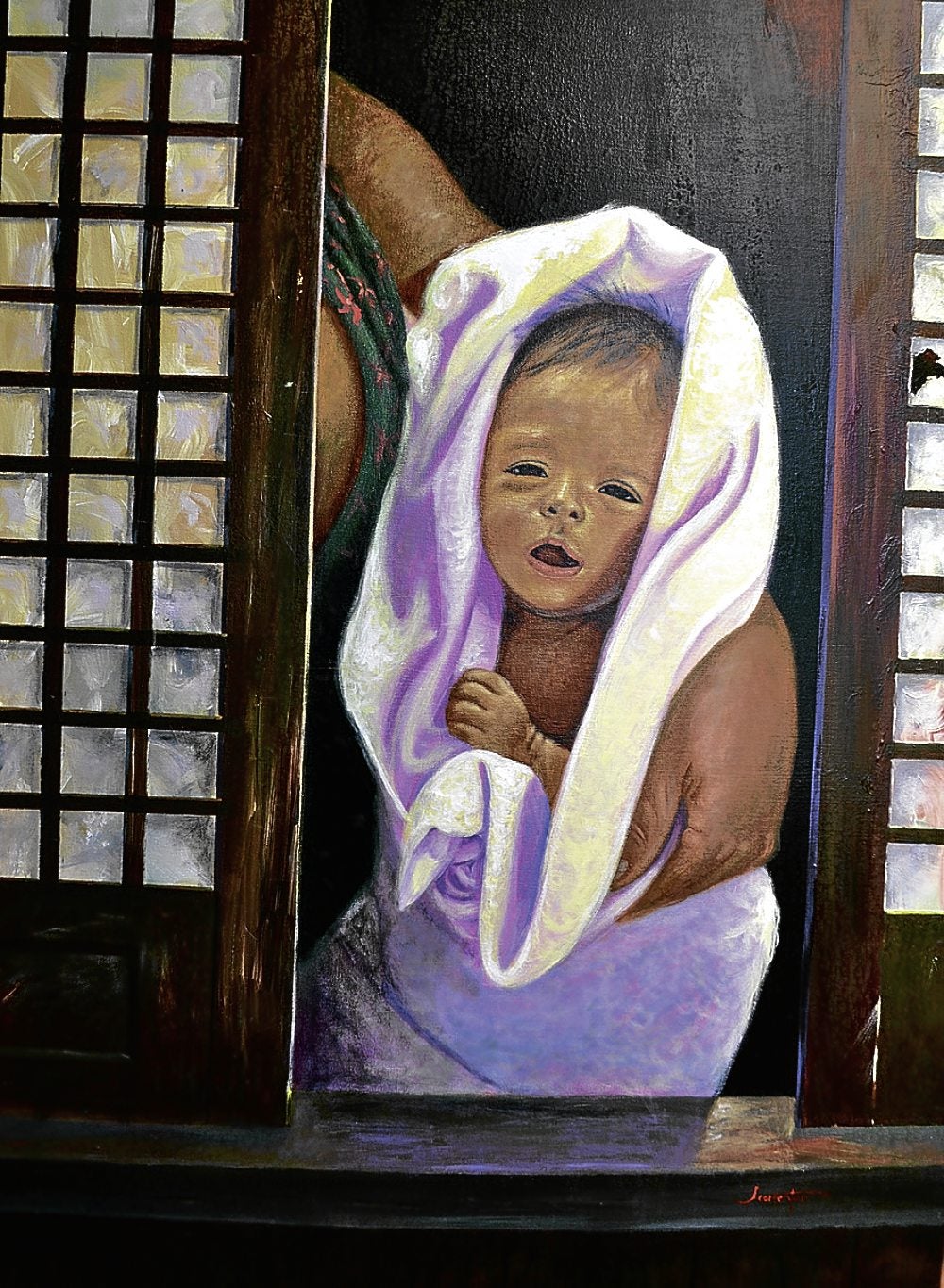 Physicians turn to the healing power of art and beauty

Did you know the Philippine Heart Center reserves pride of place for the fine arts in its building for medical arts? Its art gallery has been hosting monthly exhibits since 1999, thanks to its chair, Rogelio Caringal, an architect by profession.

Under his auspices, solo shows and group exhibits of young, old, professional and amateur artists have been held here. Who would ever think of finding art pieces—paintings, sculpture, art photographs, flower arrangements, rock fountains—exhibited in  otherwise stark surroundings dominated by blinking emergency light, wailing siren, smell of medicine, taste of anguish, and cry of grief or joy?

To cap this year’s PHC art lineup is the painting exhibit “Five Loaves and Two Fishes,” organized by Dr. Orestes “Resty” Monzon. He is the chief of the PHC and UST Nuclear Medicine division and chair of the UST Department of Radiological Sciences, where he also teaches bioethics and radiology.

The exhibit will also launch “Callous,” a collection of comic strips by Carlo José San Juan, MD. It is a compilation of the doctor’s online comic-strip series featured at callouscomics.com (2009-present) and the Manila Bulletin (2012-present).

Taking its theme from the Miracle of the Five Loaves and Two Fishes (Matthew  14:14-22), the exhibit  will benefit charitable organizations.

The paintings are from Monzon’s collection. Side by side with this exhibit-sale is 25 Raffle Tickets/ 25 Paintings/ 25 Winners, proceeds of which will be donated to Verbum Dei Catholic Missionaries.

Monzon is requesting his friends to donate to Notre Dame de Vie Community in lieu of gifts for his 65th birthday.  He refers to it as his offering to celebrate his life’s milestone.

He says: “There’s enough space to share, enough love to give at 65.

“Turning 65 is opening another door of opportunity. “I will not close the window past me. I started work at the Philippine Heart Center on Feb. 14, 1975, the day it opened to the public, which also means I have been in the institution for 37 years of my fruitful life. It has offered me so much:  my career, my wife Edna, our children and friends.”

Edna, nee Garayblas, is a cardiologist at UST and PHC, and a professor at UST and Pamantasan ng Lungsod ng Maynila, where she served as dean of Medicine.

Their children are Ana Bernadette, a psychologist; Christelle Ma. Edna Monzon-Daza, a medical doctor; José Orestes, a BS Math graduate of DLSU and IT student at UP; and Marguerite, an architect.

Colleagues and friends ask Monzon about his immediate plans; how he would cope with retirement or fight boredom.

His quick response: “First things first. I will be busy cleaning up the clutter, both material and spiritual. Battling with clutter would be a daily commitment, more so on Day 1. Material clutter collects easily in the house, since we bring home too many things through the years. Spiritual clutter is another thing. We have to be beautiful outside and inside. Retirement provides ample time and attention to discern which ones to let go and which ones to keep.”

Patron of the arts

He is starting by letting go of many from his collection, which he started acquiring since medical school from 1964 to 1972.  He was blessed with having friends who loved the arts, literature and theater.

He and his friends used to rush after school at UST to take the jeepney to the Cultural Center of the Philippines. There they saw Severino Reyes’ “Walang Sugat” and Rolando Tinio’s Filipino adaptations of classic plays.

For the “Swan Lake” performance of Dame Margot Fonteyn and Rudolf Nureyev, he remembers paying a princely sum of P5 to get a seat at Balcony II.

He recalls: “Sometimes we did not have the money to buy the cheapest ticket. But we were always at the CCP whenever there was a change of performance, or at the Manila Theater Guild, or at the art galleries. We frequented Solidaridad and Erehwon bookshops, too.”

Monzon is happy to share: “We felt the best thing about going to the galleries, the theater and museums was the ensuing discussions with my colleagues, our analyses and appreciation of a particular piece. How a painting, for example, represented the life and soul of an artist. I discovered how beautiful a reflection could be at sunset. I admired the way brush strokes breathed life into a canvas.”

He adds: “We usually chose two or three paintings that we liked most and discussed our reasons for liking them. It was a process of growing up in the arts. We felt like critics despite the fact we never had the proper background in the fine arts. We were medical students intruding into another zone. Funny, but we invariably chose the same paintings as the other friend did.”

Monzon’s interest in art was developed when he got a fellowship for nuclear medicine at  University of Bonn in Germany in 1978-79.

He says of the experience: “I was a student training for my specialization while saving every penny to be able to play tourist and take photographs during weekends. I have taken much from the Germans, their self-discipline, reliability and prudence.”

In Bonn, Monzon fell in love with Mozart and classical music. Today, he is a staunch supporter of the UST Singers under the baton of Fidel Calalang.  The choral group twice won the Choir of the World award in the Llangollen competition in Wales, UK.

Monzon remembers inviting the group to his house to give a concert for his German friend, Dr. Manfred Fischer, who came to Manila to lecture in the annual convention  of the Philippine Society of Nuclear Medicine. So impressed was Fischer that he offered to host a night concert at his hometown near Frankfurt during one of the group’s European concerts.

Man of many talents

Monzon is partial to Impressionist artists like Monet, Renoir, Degas and Mary Cassatt. The Musee d’Orsay and the L’Orangerie in Paris are his favorite museums because of their being, in his words, “the center of French Impressionism.” But he also loves watching contemporary musicals like “Rock of Ages” and “Nine.”

Monzon considers his parents  the great influence in his love for music and the arts. His mother Filomena and her sister were performers at town fiestas in their hometown of Naic, Cavite. As a young boy, he learned to appreciate paintings hanging on his grandmother’s walls.

He is fourth of six siblings.  He grew up a well-rounded child, who at school loved both the natural sciences and the arts.

When interviewing young radiology trainees, he invariably asks: “What do you do outside of your being a physician?” “What talent can you share with us?”

He lectures them that a physician who knows only medicine, diagnosis and treatment in his daily life would be a bore and bored. Quoting John 10:10, he says a person must live to the fullest and share with others what God has given him.

Monzon, indeed, lives by his dictum. Apart from organizing conferences on radiology, nuclear medicine and family life (the latter he conducts together with his wife), he indulges in photography.

He has joined 10 exhibits. “Some People, Some Photographs” and “Windows, Doors and Narrow Streets” were his solo shows.

He has also collaborated with Florendo, creating paintings from his photographs in the show  “Feeding the Doves.” The medical doctor has won prizes in these artistic endeavors, too.

What else can this doctor (not) do? Well, he cooks sinampalukang manok using young tamarind sprouts and flowers to make the chicken broth.

Retiring? He plans “to do things I did not have time or opportunity to do. Like maybe enroll in a painting class, or take cooking lessons and open a restaurant? Or write a book.”

So watch out for Orestes Monzon’s coffee-table book. He is co-authoring it with two others.

MMAFI will be holding a trilingual poetry competition in English, Filipino and Chinese in 2013. Submission of entries will be on April  15, 2013. Contest rules will be announced soon.