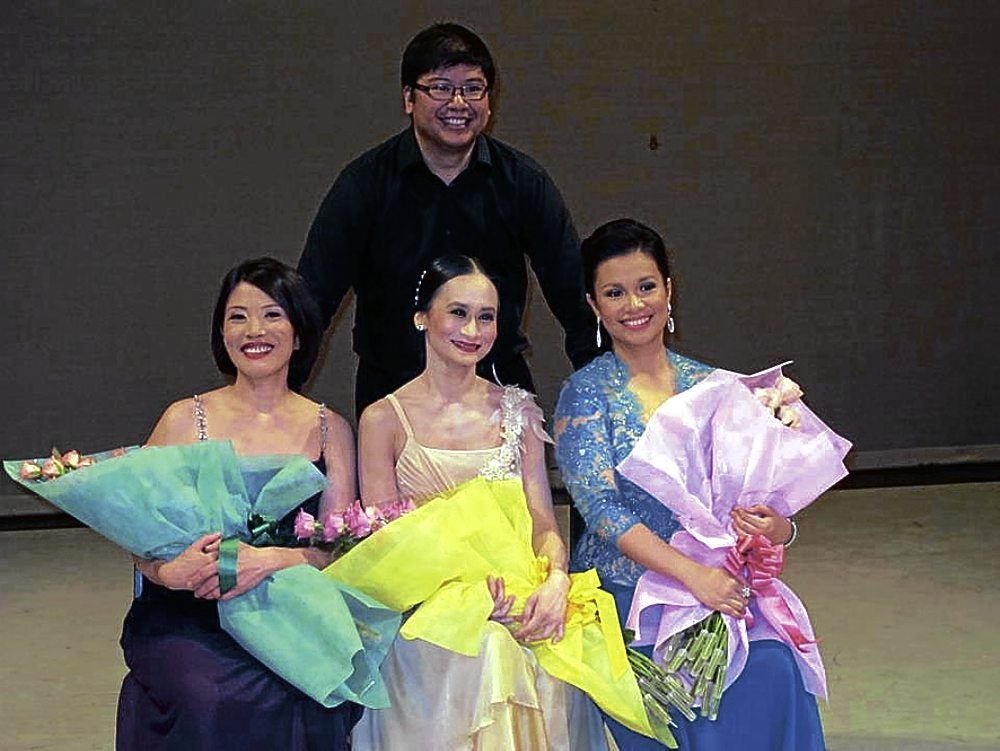 Filipino pianist Cecile Licad continued her phenomenal mastery of the Chopin and Liszt repertoire with another electrifying recital in California and Boston.

A California music critic singled out the Liszt number in her San José recital: “In the loud pieces—the opening ‘Chapelle de Guillaume Tell’ and especially ‘Orage’ (meaning ‘storm’)—Licad rampaged over the keyboard, delivering huge expressive sweeps with rushing waves of emphasis, increasing fury into devilish anarchy. Rumbling noises the likes of which are rarely heard came out of the piano. Rhythms were freely flexible, moving beats back and forth. This, I thought, must have been what it was like to hear Liszt himself play, making audiences swoon.”

In Boston, music critic David Patterson of the Boston Musical Intelligencer wrote that the pianist’s arresting velocity coupled with astounding muscle gave the Boston audience a dominating show of pianism, from one of today’s keyboard powerhouses in music, of two of the all-time greatest writers for the instrument.

Playing to a full house on a brand-new German Steinway grand, Licad played Liszt’s “Première Année: Suisse,” from “Années de Pèlerinage” and Chopin’s Piano Sonata No. 2 in B-Flat Minor. She dedicated the latter to the late Filipino filmmaker Marilou Diaz-Abaya, who passed away last Oct. 8.

Patterson noted: “Licad is in possession of enormous virtuosity. On this occasion, the still young, very fit-looking, and gracious Filipina roared through Liszt, a bit less so the Chopin, and, in an about-face, displayed how delicately and finely her fingers could touch the notes of the Gottschalk. There were signs of that softness in the Chopin, too, at the very end of the Lento of the Marche Funébre. To wondrous effect, Licad brought back the doom of the march ever, ever so quietly, as if it had arisen out of a beautiful, heavenly reminiscence. For me, that may have been the signal moment of the afternoon’s recital of Romantic-era expression.”

The critic—who is a music professor, former chair of University of Massachusetts, and a holder of a doctorate degree from Harvard University—also noted the pianist’s power of shaping. “What I sensed all along was her great potential for poetic imagination. It was power and speed (we can remember that Liszt broke a few strings in his day) and, in addition, sound sculpting, that won the day. Example, for Chopin’s opening of the Sonata No. 2, marked “Grave,” Licad addressed the four measures in a gesture somewhat akin in meaning to Beethoven’s declaration in the introductory notes of his Fifth.”

Licad said the concert was one of those few times where she felt the audience was with her from the first note to the last. “I was quite happy with how I was able to connect with them. It really felt as if I was just playing for friends in a living room.”

A Filipino in the audience told the pianist an American woman was totally in tears in the Lento section of the Marche Funébre of Chopin’s Sonata No. 2 and was trying hard to catch her breath.

Another American music-lover in the audience, Jim McDonald, wrote: “Not only did Ms Licad show amazing control with volume, and play with a tenderness that was never sentimental. She did, for me, two other remarkable things. She produced a lyrical soprano voice early in the Lento part, and then briefly introduced an entirely different color, a stronger ‘alto’ to contrast with the more delicate soprano, which then returned before the reprise of the funeral march. And she brought out inner voices in the march, particularly the ‘tenor drone,’ back and forth between the neighboring notes F and G-flat, bringing a haunting relentlessness to the piece.”

Licad not only got a rousing standing ovation but ecstatic fan letters as well. French conductor Pascal van Haeren, who was in the audience with his family, said it was refreshing that the pianist avoided pianistic cliché and just delivered “pure music that can touch the heart and imagination of the knowing and unknowing ones.”

A week before the Boston recital, Licad was in Manila for a command performance during the 150th anniversary of a Swiss bank. The audience—composed mostly of Asian financiers and corporate moguls—gave the pianist a rousing standing ovation.

Licad’s winning interpretation of Chopin and Liszt started in Manila in her first collaboration with Lea Salonga, Lisa Macuja and Gerard Salonga, and on to her recitals in Pampanga, Cavite and Cebu.

“I will start the new year with new concerts with different repertoire,” Licad said. “This means I will never get to rest during the holiday season.”

For Licad, there is really no secret to performing Chopin.

“I learn the score very well, not just my part but everybody’s. Being with a chamber orchestra, you don’t just think about your music. But when I perform, I stop thinking and analyzing and play what I feel instinctively. I never plan anything—the phrasing is here, a harmonic chord is there. I think of it at the moment.”