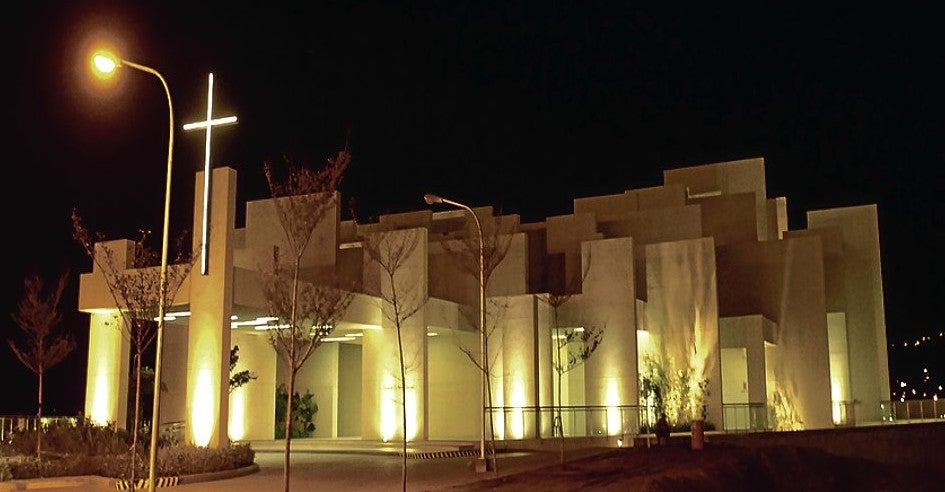 THE CHAPEL of San Pedro Calungsod is a forest of walls that you wander through until you discover the center–a space of spiritual retreat and well-being. JIM GUIAO PUNZALAN

Bold and expressive in architecture, a new place of worship serves as the foundation of a large mixed-use center in a reclaimed area in Cebu.

SM Prime Holdings is poised to replicate a Mall of Asia-type of development at the South Road Property, and the Chapel of San Pedro Calungsod will serve as a spiritual anchor.

Initially, the firm Carlos Arnaiz Architects (Caza) gave the chapel project a pet name, “Stonehenge,” referring to the ancient monument of massive standing stones in a circular setting in England. Similarly, from afar, the chapel is a formation of 100 concrete walls of varying sizes.

“Aesthetically, people said it didn’t look like a church. It’s called the ‘Church of 100 Walls.’ Each wall is different in height and width. No wall is the same. The inspiration was the notion of diversity. We wanted a church that represented what society is today. We wanted a church that stands for many paths, that wouldn’t be just one path to God,” says New York-based, Filipino-Colombian architect Carlos Arnaiz.

“It’s also been called a forest of walls that you wander through, until you discover the center—a space of spiritual retreat and well-being.”

He adds that it was also nicknamed “stegosaurus,” after the dinosaur with bony plates on its back. The environmental engineers discovered that the building fins that went past the roof provided shade and reduced heat in the building.

The stark cross that stands above the fins is like a finger pointing toward the heavens.

Reading an article on Arnaiz’s Chosen Children Village Chapel, she was impressed by its boldness, which was highlighted by the simple, repeating volumes of irregular rectangular lines done in one material, concrete. The purity of the line and color powerfully communicated a reference to the Divine.

Fernan contacted Arnaiz through Google. Among his current projects are the international airport in Caticlan, a hotel in Rio de Janeiro, an office complex in Bogota, a luxury condo in Lima, a museum in the US and a mixed-use center in Kuala Lumpur.

Arnaiz is often asked to describe his style. “We are more interested in seeking a design that you might not have seen, but is produced out of a very close study of what the particular subject has—climate, function and site.”

When Fernan showed Arnaiz’s background materials to Hans, they learned that his sister, Elizabeth Sy, president of SM Hotels, had exploratory talks with Arnaiz for other projects.

Fernan recalls, “Hans was going to build a traditional church, but the mall would be modern.” She urged Hans to build a contemporary church that would blend with the design of the new complex.

“She (Fernan) lobbied with SM Group. They were excited to think about how we could give something to Cebu that has never been built, and would break some boundaries,” says Arnaiz.

Meanwhile, when Hans “Chico” Sy Jr. was planning to get married in their resort development in Hamilo Coast, Batangas, Arnaiz was tasked to convert the sales office into a chapel. The basic skeleton was kept. However, it was transformed into a sanctuary of glass which blurred the distinction between the indoors and nature. The chapel became part of the seascape.

In Cebu, the place of worship in the south reclamation area was meant to be called the Shrine of Mary Mother of God. When the Church announced that Pedro Calungsod, the Cebuano martyr, would be canonized as a saint, Fernan requested the diocese to reconsider making it an homage to Calungsod. Since he is a newly canonized saint, the place would have to undergo several procedures until it is classified as a church or national shrine.

The 4000-sq-m chapel was built in 10 months with a budget of P160 million or $4 million, a modest sum by international standards. Designed to bring a sense of community, it includes a multipurpose hall, an Adoration chapel for the Tabernacle, a baptistry and a children’s room.

“You can’t buy a one-bedroom place for $3 million in New York,” says the architect.

Since reclaimed areas tend to be flood-prone, Sy insisted on raising the church. “Seventy percent of the project cost was in the piles and raised slabs. Basically, this church is on stilts,” explains Arnaiz. The elevation of the architecture produced sunken areas which became pocket gardens for meditation. The adjacent walls serve as spaces for silence and Stations of the Cross. “You can do the Stations of the Cross on the outside and wander through the walls,” says Arnaiz.

From the entrance, the place is obscured by volumes of concrete walls. “People describe God as a mysterious force that appears in your life when you least expect it.  We wanted a building that was mysterious, almost like a cloud, ambiguous as it is constantly changing.”

But once inside the chapel, the individual feels the openness of the large expanses of glass that embrace the outdoors.

Although the chapel is composed of modern minimalist elements, Arnaiz says the design still has associations with the past.

“The design is simple—just concrete walls and paint. By organizing the different walls at different heights, we create this experience of light and air. Before we did this church, we researched on the history of church design. We discovered that all churches have a vertical element. At St. Peter’s Basilica in the Vatican, your eyes are raised to the cupola. At St. Mark’s Basilica in Venice, the eyes are raised to the Byzantine mosaics on the ceiling. The design always brings the eyes up to an elevated being like God,” he explains. For instance, the spires and the glass fins carved into the altar lead the eye upward.

“The other thing is light. There are clerestories in churches in France. In Gothic churches, the stained glass allows light to enter in different ways. Here, we were able to achieve the two elements of verticality and light through the walls. Because of its strong volume and openings in various sizes, the power of natural light produces magical effects on the simple interiors. At night, the artificial lighting emphasizes the composition of the walls.”

The even number of the walls—all 100 of them—was a reference to the symmetry that lent formalism to ecclesiastical design. “Many churches had patterns that were divisible by a particular number,” says Arnaiz.

To give the chapel a sense of place, the walls were done in rough finish to mimic Mactan stone. “We wanted a church that would feel that it came out of the ground—to appear like it’s protruding, as if these things were a ruin. We spent time on texture and matched the color of Mactan stone, which is considered endangered,” explains Arnaiz.

Summarizing the design concepts, he cites: “One, there’s a notion of a mysterious building that beckons you to learn more. It produces a sense of curiosity. Two, in the church, you are invited to wander around. This recreates the sense of seeking that is part of the religious experience. Three, the church stands for the creation of one through its diverse parts. It embodies spirituality today. It’s not like you are being dictated to, that there’s only one way to God.  He is experienced in different ways, and the Church is the symbol of that reality.

“Four, we’ve made walls of the same thickness but different heights, coordinated and designed in different ways. We then tapped into the history of ecclesiastical design, which has to do with verticality and the interplay of natural light with volume.”

During the consecration rites, “I was overwhelmed by the many forces that worked to make it a chapel site for Pedro Calungsod, even to the choice of a rector,” says Fernan.