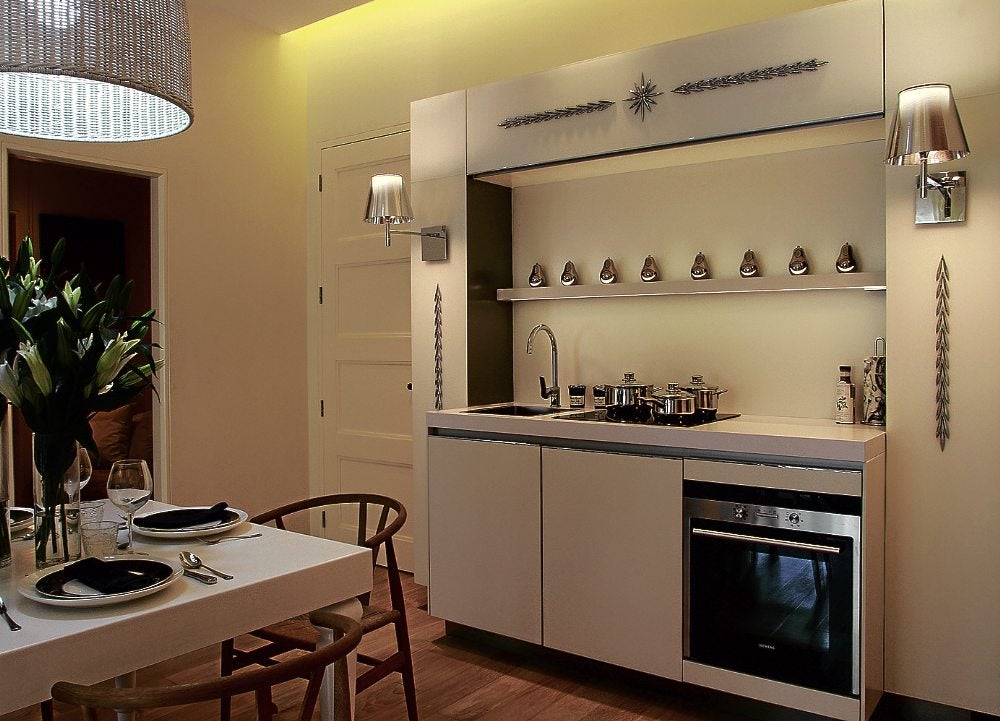 STARCK meets Warendorf, a German kitchen system. The opaque glass, leaf patterns and Venetian edgings lend character to the kitchen. The plastic wall lamp is by Starck, but of course.

Known for its $10-million apartments, design icon Philippe Starck’s company called Yoo is creating the common areas of a condominium by the Pasig River.

The 56-story Iguazu is the fifth and tallest tower in Century Properties’ Acqua Private Residences, a 2.4-hectare development between Mandaluyong and Makati.

British property developer and Yoo founder John Hitchcox admitted he was initially lukewarm about the offer from Century Properties.

Robbie Antonio, Century Properties managing director, recalled how the real estate firm tried to convince Yoo. “If we gave in to them, we’d create 300-sq m units only for 10 people. That wasn’t the point.”

When Hitchcox visited the site on Christmas Day last year, he liked the concept of Acqua, which is dubbed a “residential Eden.”

“Sometimes it’s more difficult to design low-cost projects but we love the challenge. This project is a regeneration and gentrification,” he said. Hitchcox was referring to how the property development helped speed up the cleaning of Pasig River and how Century Properties is transforming a drab and lifeless environment into a rain-forest-theme, multipurpose venue.

Acqua’s concept augurs well with Starck’s signature. As a brand, he stands for sophistication and accessibility, and he designs spaces and objects that are innovative yet affordable.

Marco Antonio, Century Properties managing director and Acqua project head, rejoined, “Not every condo can be worth more than a million dollars.  There is no point in offering champagne  when one can’t afford it. One of Philippe’s philosophies is design democratization. His designs are high-tech but they won’t break the budget.”

Hitchcox explained that the buyer isn’t just getting 30 sq m but actually acquiring the lifestyle.  “We’ve done a survey that showed people are moving in to places to be with like-minded individuals  and enjoy spending time in these buildings. The idea of small homes and lots of communal areas is the way of the future. Your space may be 30 sq m but your swimming pool is 40 meters long.”

Aside from amenities that are exclusive to Acqua residential towers, inhabitants can enjoy Pebble Country Club, the garden and river walk promenade.

“People recognize these as an appreciating asset. It’s rare to find projects that have communities. These appreciate in value,” said Hitchcox.

Starck’s design concept drew inspiration from “The Little Prince,” by Antoine de Saint Exupéry, which tells the adventures of a prince from an asteroid and the narrator.  Hence, elements from the solar system will be a dominant theme. At the crown of Iguazu is Cielo (meaning sky), three levels of amenities which host the waterfall, indoor and outdoor libraries, DJ booth with dance floor,  pool, fitness and wellness centers and lounge areas. Suspended from the canopy is an orb which turns into the sun by day and the moon at night. A quote from “The Little Prince” in Starck’s handwriting will also adorn the tower.

Mark Davison, Yoo’s head of design, explained, “Some ideas are abstract, but it’s in keeping with the childlike wonder of the universe.”

Cielo is Yoo’s solution to reviving human connection in the age of technology.

“Try sitting down at a family dinner without somebody picking up the Blackberry or phone. I’m trying to bring interaction back into their homes. With the size of the homes getting smaller,  we are spending time on our own. We go out to restaurants more. But a lot of people on a Monday evening don’t go out.

“In this building, you spend time upstairs in the clubroom, and have a chat with somebody. It creates an environment like a home in a modern setting. That’s a phenomenon happening in countries with a big population.”

Yoo (Starck’s spelling of “you,” in reference to the end-user) designed three model units which reflected the French creator’s style. Still, Davison pointed out the company also utilizes themes or icons from the culture of its client and integrates them into their future designs.  “The cultural mix is part of our design evolution.” For one, the Philippine brand Tai Ping produces carpets for all its international projects.

“Yoo used local materials and icons in ingenious ways that we developers never thought of.  Aside from having a fresh eye, they kept the buyer in mind. Some may want a natural and relaxing theme, others want drama while others want something minimalist,” said Marco.

Along the hallway, a popular quote from “The Little Prince” is inscribed on the walls: “On ne voit bien qu’avec le cœur. L’essentiel est invisible pour les yeux” (One sees clearly only with the heart. What is essential is invisible to the eye).

Yoo designer Anastassia Kessaris explained Starck’s DNA in the design. The corridors are lined with Venetian mirrors to welcome visitors. Evoking Parisian chic are two-toned chandeliers. In all the units, plasma TV sets are framed like artworks.

The minimalist one-bedroom unit is decked like a hotel suite. As a reference to Starck’s culture, there are prints of Europe and France on accent walls and throw pillows. Another Starck trademark: juxtaposing luxurious items such as frosted glass dividers against non-luxe furniture, such as a wicker chair. The white color scheme in the bedroom is made warm by the mixture of textures such as velvet and linen upholstery and a furry stool on white lacquered flooring. The abstract print on the Tai Ping carpet breaks the monotony of the white.

“This is a small apartment, we don’t want to overdo it,” said Kessaris.

The nature-theme two-bedroom apartment is designed for people who aren’t ready for Starck’s provocative style. There are references to nature such as the wallpaper mimicking timber and a chair with a tree branch back alongside a ceramic tree stump. Instead of night tables, white swings flank a European-inspired bed frame.

The Philippine eagle and its feathers are a design peg for the culture-theme unit. “The Philippine eagle on the mirror doesn’t have a beautiful face. We put the Starck humor by cutting up the face so you can put your face in the hole,” said Kessaris.  “Starck is keen on adding  the local culture.” She pointed to chairs from the Kish store which doubled as side tables. Culture is also depicted in maps on the ceiling, text on the carpet, rolls of paper and letters as décor motifs, an accent wallpaper with book prints. In his trademark, Starck invented ceramic flooring that mimicked wood.

Century Properties wanted high-impact design for Iguazu since its market has been expanding to overseas Filipinos and foreigners. “Our aim is to build progressive, world-class projects that are design-forward,” said Marco.

Hitchcox lauded Century Properties for its bravado.  “They are a very 21st-century developer. We travel around the world and spend our time in newly industrialized countries showing developers what we’ve done elsewhere. These guys are doing it all right themselves—from the adoption of organization, vertical living, integration and attention to detail to the community in the building. They are commercial winners, and are good for these towns. There’s a huge opportunity to regenerate the urban housing stock in Manila.”