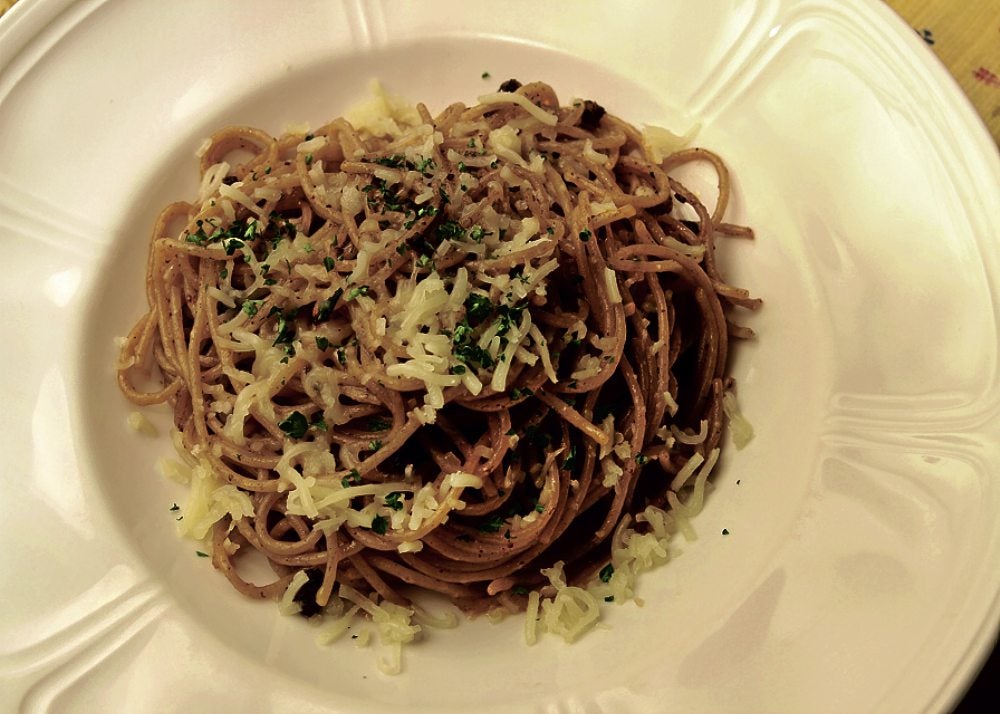 Aside from the great food and new menu, part of Chateau 1771’s charm is its history, the sense of place and the picturesque views of the gardens in Greenbelt 5.

On its 24th year, Ramon Ricardo Gutierrez, CEO of Chateau Group of Restaurants, recounts how it all began in the family-owned Malate Pensionne, where he set up a restaurant along his mother’s garden.

Olmedo was a regular fixture as he escorted his daughter to nearby St. Scholastica’s. He sketched portraits of Gutierrez’s guests and played backgammon, with free meals at stake. The artist once owed Gutierrez 64 meals, so that he ended up giving him a painting.

“I didn’t like the weird faces. I asked him to make them more pleasant,” he recalls.

Olmedo created a series on Chateau’s waiters, scenes in France, instruments, dancers and people eating in cafés. As a tribute to the restaurant, he also captured the original Chateau 1771 in Malate. In another mural, Cosio and Olmeda painted the zeitgeist of Malate in the ’80s. Their works dominate the walls of the Greenbelt restaurant these days.

When Chateau 1771 moved to Ortigas, Olmedo continued to patronize the restaurant. Olmedo enjoyed pastas and the lemony chicken of Vicky-Rose Pacheco, the executive chef and chief operating officer of Chateau 1771 restaurants. In 1996, he took his dinner at the restaurant and looked longingly at his paintings. As he boarded the car, he shook hands with Gutierrez and told him to take care of his artworks.

At 6 a.m. the next day, Gutierrez was awakened by a call from Cosio. Olmedo had died of a stroke.

Gutierrez has other memories of the restaurant which will be compiled in a book when Chateau 1771 turns 25 next year. He cites the unity and resilience of the staff when Super Typhoon “Rosing” devastated Manila in 1995. At the restaurant, the roof was blown off and water cascaded from the stairs.

Although Gutierrez was out of the country, Pacheco manned the place. The maintenance crew bought plywood and fixed the roof. The waiters came to work to clean the place. By evening, it was business as usual.

“That shows the pagmamalasakit (concern) and the discipline of the staff,” says Gutierrez.

The star of Chateau 1771 is its new menu. Pacheco says the restaurant is using more organic products such as red and brown rice, whole wheat pasta and free-range chicken.

No longer a hearty meat-eater, she has prepared the likes of Valle Verde soup, a purée of fresh greens. For people with various tastes and dietary preferences, she recommends a tarte platter consisting of roasted vegetable terrine, tomato confit with thyme, goat cheese and cured gravlax.

“I removed the sea bass from the menu to be different from the rest. Even if it tastes good, it’s endangered,” she says.

In its place, she offers halibut, which is not scaly like the sea bass. The cooking approach is simple: poached in olive oil, the delicate flavor bolstered with tomato-orange marmalade and lent some drama with bay leaf, shallows and lemon zest for freshness.

Pacheco also transforms the plain trout into a trophy dish without any pretension. The trout is baked in its juices to highlight its clean taste.

“It’s more subtle and pinkish without the fishy smell,” she says. The trout is laden on a bed of lemon slices, dredged with olive oil, sprinkled with pecans for a little earthiness and seasoned with the penetrating flavor of thyme.

The vanilla brick spring chicken is roasted under bricks to make the skin crisp and fresh. The probiotic chicken (there are no antibiotics to keep disease at bay) has the same rundown of butter and garlic with a hint of vanilla bean.

“I love chicken because it’s versatile. It can be grilled, roasted, pan-fried, stuffed. The tips can be made into salpicao and the stuffing becomes morcon,” she says. “For the spring chicken, I grilled it under a brick to flatten it and make it crisp.”

She infuses Aklan oysters with a French profile of butter, tarty lemon and shallots, with bacon for saltiness to create subtly contrasting flavors.

The lamb cutlet, in its juicy and pink tenderness, is immersed in mint-basil-walnut pesto and infused with comforting roasted capsicum sauce. In keeping with tradition, it is served with marble potato salad and grilled peppers.

Since pork shoulder is not strong-tasting, it is braised gloriously in milk to pump up its natural flavors and enhanced with the sweetness of sage.

The diner is rewarded with a killer Valhorna chocolate ganache tart, swathed in light caramel sauce that plays against the bittersweetness of the French chocolate.

Although Pacheco wants to create an all-new repertoire to be different from the rest, she has been urged to keep the familiar but highly salable ones.

Since mushroom soup is a comfort food, Pacheco uses boletus mushroom, which is more potent than the portebello.

The pasta chorizo, meanwhile, is a 24-year-old Chateau 1771 classic. The pork sausage is customized for the restaurant, with spices imported from the Spain. Normally eaten as an appetizer, the chorizo is made into a pasta sauce which is tossed into whole wheat spaghetti.

A favorite of the late Olmedo, the beef potence is served the classic way—flambéd and served with sauces.

The lemony chicken caters to the Filipino penchant for sweet and sour flavors, and is served with garlicky fried brown rice.

Although Pacheco keeps the local market in mind, she still maintains classic traditions. Once, a French couple ordered lamb shanks which were served in cocottes (a shallow metal pot with handles). It struck a familiar chord with the foreigners, reminding them of home cooking.

Another hit among foreign diners is the duck. Instead of the usual confit, Pacheco cooks it for five hours and pampers it with ginger, white beans and tomato.

“The cooking here is all about freshness. We build flavors from scratch. I either make something original or use classic dishes in their real names. Like, osso buco is really veal shank.”