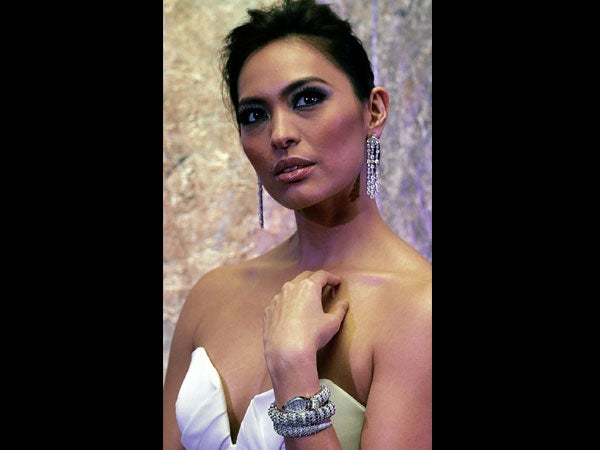 In Chinese astrology, the snake symbolizes good fortune. A snake in the house is interpreted as a harbinger of good things; it means bounty for the family.

The snake has also been a symbol of wisdom and fertility in mythology. It has been long regarded as an ancient symbol of power and temptation, feared and revered at the same time.

For the historic Roman jeweler Bulgari, the snake has long been an iconic part of its watch and high jewelry collections, reinterpreted and modernized through the years in a nod to the serpent’s symbolism of eternal youth.

For the wealthy believers of Chinese astrology, the newest Serpenti collection of Bulgari seems like an auspicious way to usher in the Year of the Water Snake, which begins Feb. 10, 2013.

Bulgari Philippines recently presented a 37-piece Serpenti collection to its loyal clients at Red at Makati Shangri-La. The place was transformed into the luxury jeweler’s own plush salon, where catwalk beauties paraded the largely one-off jewels.

Mario Katigbak, the jeweler’s country head, underscored how the Serpenti design has evolved. It was introduced in 1941. The simple coil design with a stylized serpent head, known as Tubogas Serpenti, now features scales, like snakeskin. The scales are studded with precious stones.

The Tubogas Serpenti, popularized by the glamorous Elizabeth Taylor, was reissued in 2010 to mark Bulgari’s 125th anniversary.

The Serpenti has had many incarnations, in 18-karat white, yellow or pink gold, and with diamonds, rubies, amethysts, emeralds, sapphires, peridots, malachites, rubellites, or a combination of these stones.

At the Bulgari presentation, the pieces bore price tags that ranged from P1.5-P15.5 million. A watch worn by model Isabel Roces was the priciest in the lot.

There are only 15 pieces in the world of the  seven-coil watches, according to Katigbak, while the style with a head of diamonds has only six pieces made.

Asked if he brought in the pieces worn by actresses Julianne Moore and Rachel Weisz in the Bulgari ads, Katigbak shook his head and grinned conspiratorially. “Too expensive,” he said.

But perhaps not quite for those who want a symbol of good omen around their wrists and neck in the year ahead.