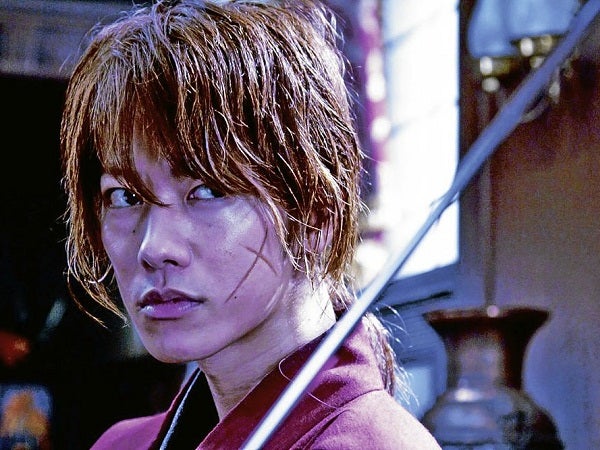 “Nooo!” One guy wailed, looking utterly crushed when the ticket booth personnel told him the theater was already full. If he dropped on his knees and said the world was about to end, we wouldn’t really blame him. It was past 10 p.m. on a Friday night, and the SM Mall of Asia Cinema ticket booth was still crowded with panicking “Rurouni Kenshin” fans. That night, even had to open one more cinema at the last minute to accommodate the demand. All this for one man who, quite literally, bears a cross for everyone to see.

Based on the blockbuster manga series by Nobuhiro Watsuki, “Rurouni Kenshin” (also known as “Samurai X”) tells the fictional tale of Kenshin Himura (Takeru Satoh, “Kamen Rider Den-O”), a reformed Meiji-Era swordsman who wanders around Japan helping people in need with his reverse-edged sword, all the while battling the bloodthirsty ghosts of his dark past.

The movie was released in Japan in late August and was subsequently licensed in several different countries. After months of speculation and postponed release dates, SM Cinema confirmed that it has acquired the rights to show the film in selected theaters nationwide as part of its CinExclusive lineup. The movie had been so in demand, with all theaters packed from morning till night since its Dec. 5 premiere, that SM had extended its limited run to one more week.

The plot is a mashup of the first two story arcs in the manga and anime, with a few minor modifications. It revolves around Kenshin locking horns with greedy opium dealer Kanryuu Takeda and beady-eyed sellsword Jin-e, and meeting young kendo instructor Kamiya Kaoru while on her vengeful quest to find the “Battousai” criminal who’s allegedly been killing innocents in her dojo’s name.

The characters are all perfectly cast. Satoh’s Kenshin looks very realistic, to say the least, from the small, wiry build to the discreet red tint of his hair and the cross-shaped scar. Something’s a bit lacking in his portrayal of the duality of his character’s nature (gentle, bumbling Kenshin and the cold-blooded Battousai), but what’s important is that he was able to pull it off throughout the entire film.

Whenever present, the supporting characters stole the show in their own way. As the female leads, Emi Takei (“Ai to Makoto”) and Yuu Aoi (“Honey and Clover”) played their parts well as headstrong tomboy Kaoru and coy, calculating Megumi, respectively. Meanwhile, comic relief came in the form of adorable runt Yahiko and Kenshin’s ill-mannered sidekick Sanosuke, who was clearly the crowd favorite. The audience laughed every time the muscle-bound brute appeared onscreen, especially during his slapstick kitchen duel with Takeda’s dreadlocked lackey, Banjin Inui.

While former Shinsengumi leader Hajime Saitou fits the brooding antihero mold to a T, Jin-e is deliciously creepy, and bad guy Takeda is as over-the-top annoying as his rebonded bob and lower dentures. The only puzzling thing was the character sketch of the masked villain Gein, whose cosplay-like getup looked out of place while he’s clashing swords with a hakama-clad Kenshin.

Thanks to the gorgeous cinematography, the beauty of old-world Japan was captured in every frame, from the opening battle sequence in the snow to the bustling streets and quaint houses bathed in warm yellow tones. The fight scenes were beautifully executed. Very little CG animation was used, mainly to provide the blood spatter. Instead of death-defying stunts, the movie employed special tricks to give the characters the illusion of speed and agility during fight scenes. The highlight was seeing the iconic stances for Kenshin’s Twin Dragon Flash technique and Saitou’s left-handed thrust. For diehard RK fans, watching them unfold was as historic as watching Kenshin’s priceless “Oro?” face being reenacted by a real person. Now, people have actual models to imitate.

It goes without saying that many of us had been waiting for this for over a decade, and it’s easy to see why it had taken so long. When it comes to adapting one of the best-loved anime/manga series of all time, it’s understandably difficult for film producers to meet the sky-high expectations of fans from all over the world. Besides, you can’t really pack 95 episodes and a few OAVs into one movie. Worst case scenario, it turns out to be a horrible Westernized disaster (“Dragonball: Evolution,” anyone?).

Fortunately for the hordes of grinning Pinoy moviegoers coming out of the theater, “Rurouni Kenshin” exceeded all expectations. Directed by Keishi Ootomo and produced by Warner Bros. Japan, “Rurouni Kenshin” is a very sleek production which pretty much stays faithful to the original storyline. It doesn’t even feel like it’s two and a half hours long. The adaptation works surprisingly well as a stand-alone film, which makes it a good introduction for those unfamiliar with the franchise. It also provides flashbacks explaining how Kenshin got his scar without straying too far from the main plot. Many people have actually watched the movie more than once, so yes, it’s that good.

Do we want a “part 2”? Yes and no. As much as we want other characters like Aoshi Shinomori and Shishio Makoto brought to life, we’re afraid that a sequel might just ruin the overall feeling of satisfaction we’d gotten from the first movie. The series might have ended years ago, but if the film’s success is any indication, this red-haired wanderer will always find his way back into anime fans’ hearts. In more ways than one, it was definitely worth the wait.