Asakusa, Tokyo: I have not forgotten my turtles | Inquirer Lifestyle ❮ ❯ 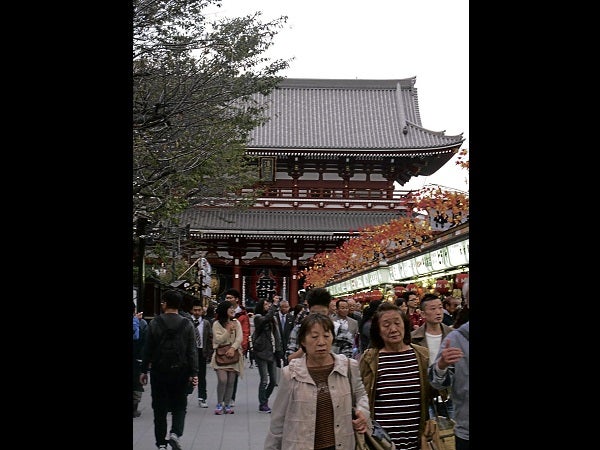 Asakusa, Tokyo: I have not forgotten my turtles

As soon as I told my mother that I was going to Japan for a seminar, she said one word and smiled: “Asakusa.”

She then reminded me that it was in the famous temple market of this Tokyo district that I, as a young boy, had bought my turtles. Now, this purchase was more than four decades ago, when my father, acting on a promise to his grandfather, had taken his three eldest children to Japan.

I could barely remember Asakusa. Yet, I have not forgotten my turtles.

I bought three tiny ones which, as I am no longer proud to admit, I had named Goodie-goodie, Baddie-baddie and Tutti-frutti. Only Baddie-baddie survived the trip back to the Philippines. He eventually disappeared from our fishpond only to resurface years later. But that, as they say, is another story.

How I was even allowed to bring my amphibious pet into our country was, now that I think about it, already quite remarkable. Those were gentler times and no one was concerned about the environmental threats from foreign animals. Besides, who would have wanted to separate a boy from his best pal?

My mother’s reminder had piqued my interest and I decided to retrace my steps from that earlier visit.

Later, in a noisy Tokyo pub, when I mentioned my plans to my friends, they were unimpressed. “Tourist trap!” was the general consensus.

I was told that there was, indeed, a time that Asakusa and its great temple of Senso-ji, were at the heart of Edo, the past avatar of Japan’s capital. The quarter was the city’s pleasure district, a floating world of glittering restaurants, Kabuki theaters, and houses of alluring geishas. All this splendor provided subject matter for that most unique of Japanese art forms—the ukiyo-e or woodblock print.

Sadly, the whole area was intensively bombed by the Americans in the Second World War, and most of the structures in the temple compound were destroyed. The old buildings have since been rebuilt but Asakusa had become a soulless, Disneyfied version of itself. So I was asked: “Why would anybody want to go there?”

Groping for an answer, I briefly considered recounting the story of the turtles but quickly vetoed this idea. Surely there was no way that I could gain from disclosing to my dining companions that I had once been responsible for a creature christened Baddie-baddie. I mumbled something about pleasing my mother instead.

Arriving at the Asakusa subway station, I was pleased to find a map of the Senso-ji precinct on the wall. There was also a colorful mural depicting one of the more chaotic festivals celebrated in the neighborhood every year.

Soon I was standing before the pair of huge carved guardians that flanked Kaminarimon, the Thunder Gate, the first entrance to the temple. I was tempted to announce that I had returned and to ask if I had been remembered. These were divine sentinels, after all, and it was highly possible that their memory cells would also be immortal.

But their scowls, as befit all door guardians, were very fierce and I knew that friendly repartee was out of the question.

The wooden giants stationed in the second gate, Hozomon, were just as terrifying and taciturn. They were not, however, the only things outsized in the entrance pavilion. There were also enormous (4.5 meters long and weighing 250 kilos) waraji or rice straw sandals hanging on the walls. These were made by the citizens of Murayama who fashion a new pair every 10 years or so. Apparently it was customary to bring slippers as offerings for a good journey.

Fleeing from my fellow tourists posing in front of Sandalzilla, I finally entered the dim interior of the main shrine. It was here that the statue of the goddess was presumably kept. It is said that the statue was caught in the net of two fishermen centuries ago. The two, with a third man who had preached to them about Buddhism, form the trio that is now honored in the temple compound, with the goddess herself.

In the main shrine I watched as many devotees bowed before the golden inner sanctuary. I tried to get a glimpse of the image of the deity but saw only gleaming decorations.

I was content with watching the people who came to consult the monks about their fortune. So it is everywhere: people turn to the divine to determine the shape of their future. I saw that there were wooden cabinets with many compartments, which I guessed may have contained guides used for divination. Looking at the slim drawers and the neat rows of shining white knobs, a possibility gripped me: “DVD rack!”

I then proceeded to the northwest corner of the compound. Here stood a hexagonal wooden pavilion, a singular survivor from as early as the 16th century. I noted its latticed panels that looked like our capiz windows.

Seeing me taking pictures, a woman came up and repeatedly pointed to the pavilion. Perhaps she was telling me that, in her opinion, it was the only thing worth photographing in the precinct. I pondered how this structure was one of the few in the area that was truly ancient and how most everything else was reconstructed after the terrible bombings of World War II. I have seen photos of Tokyo illustrating the totality of the destruction and it is miraculous that anything should escape.

Tourist trap or not, Asakusa is a poignant reminder of how the Japanese made the effort to resurrect one of their important religious sites. In contrast, despite the fact that many church walls were still intact when the war ended in 1945, and without regard to how important these churches were to the ritual life of Manila, the ruins of Intramuros were ordered bulldozed.

Contemplating the sad fate of Intramuros always puts me in a melancholic mood. So, knowing the healing effects of retail therapy, I hurried to the shops.

The stalls on the corridor that lead to the main hall stretch for about 250 meters. They are filled with a kaleidoscope of tourist mementos, ranging from the sublime to the tacky, lingering decidedly on the latter.

I saw many establishments selling traditional baked goods, snacks, and candies. One even had a cookie machine with noisy clicking parts which seemed cobbled together from soft drink cans and bits of left-over aluminum foil. Yet a lot of children were crowding around, insisting on acquisition. I huffed as I pontificated on the gullibility of the youth.

I was definite that it was only the strange sounds which made the pastries so inviting. Nevertheless, I ended up buying four packages myself! Their price tag of 500 yen was practically unmatched by the other items available.

I even found an ukiyo-e shop. It was nice to know that this age-old craft could still be encountered in the very quarter that had once inspired it. I was amazed by the fact that it was possible to obtain, right in the temple market, prints by the great 19th century masters like Hiroshige and Hukosai. Of course their works would easily set one back by up to a million pesos.

Surveying the frenetic shopping that was going on around me, I marveled at the way this corner of the city had continued to thrive despite what history had thrown at it. The place was a testament to how a site can be so devastated by war and yet, once rebuilt in a way which respects the past, can prove to be an important resource for a community.

The vibrant commerce everywhere evident and the many devotees that still thronged the shrine clearly indicated how ancient sites are valuable assets offering many different rewards.

I did search diligently for a stall which sold turtles. But unfortunately, nothing which crawled or even breathed was on sale anymore.

In a way I was glad. I was no longer a child, after all, and it was time to accept that the best souvenirs are insights. One cannot and should not take a denizen of Asakusa back home.