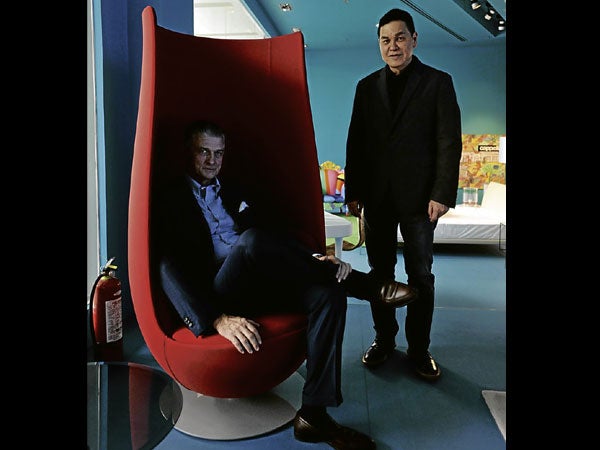 2012: Filipino design and craftsmanship continue to wow the world

The world continues to look at the Philippines as a gold mine of talent and craftsmanship. And big international names see the country as an attractive place to forge business partnerships.

The Cabaret Collection is made of fabric tubes woven on steel framework, resulting in a web pattern.

“Outdoor furniture is usually made of woven plastic. The Cabaret Collection is different because it uses acrylic and outdoor foam. This one is a soft  material and has a tactile feel,” says Cobonpue.

Cobonpue was one of the “game-changing” entrepreneurs who represented the Philippines in the global campaign of the whisky company John Walker & Sons. The online video series “City Portraits” showed celebrities in their milieu and what drove them to be forward-thinking.

2. Design icon Giulio Cappellini launched the first mono brand store in Asia.  The Italian designer with a knack for spotting talent graced the opening of the Cappellini store in partnership with Ben Chan’s Suyen Corp. on Bonifacio High Street.

Vittorio Missoni, scion of the knitwear fashion family and head of Missoni Home, liked the riverfront concept. Missoni Home will work on the 52-story Acqua Livingstone.

4. Designer Tony Gonzales’ residential project and installation lands on the December cover of  Habitus Living Magazine.  Gonzales worked on the interiors of the designer-driven residence of architect-exporter Renato Vidal. The cover features Gonzales’ famous suspended rock garden, originally made for Yuchengco Museum. Habitus’ online edition also features some of the works of sculpture Impy Pilapil. Her “Bloom” collection is one of the focal points in Vidal’s house.

5. Going green. Sustainability and eco-friendliness are the latest criteria in evaluating design. This year, Manila FAME honored companies that used sustainable or recyclable materials.  Katha Award winners Milo Naval’s Coco Lamp, made of coconut husks,  Kinks and Curls rattan lamp made by Accessoria Inc., and Bagwis Malacca Daybed by Locsin International, used discarded materials and rapid-growing wood in their works, which injected a touch of humor and whimsy.

Another Katha winner, Ito Kish’s Gregoria two-seater, is made of balusters of different heights and a cane-seater.  It is a reference to the architecture and airiness of ancestral homes. Kish’s chair uses Malay beech wood (Gmelina arborea) which is known for its rapid regeneration.

Likewise, Kenneth Cobonpue’s  Phoenix Car, touted as the World’s First Biodegradable Car, was chosen by the China-based Modern Decoration Magazine as Best in Design. Made of bamboo and rattan, the car is shaped like a leaf. It challenges the conventional car design using heavy industrial materials.

The owner has the option to replace the outer shell while the inner structure remains intact.

Cobonpue says the engine is being installed and a German factory is working on the car.

Winner in the Best Backyard category, the SeaX collection was inspired by the director’s chair and racing sailboats.  It uses innovative weather-resistant materials. The Dedon furniture company is based in Cebu.

7. Opening of Dedon Island in Siargao. It was once called Pansukian, the resort owned by Frenchman Nicolas Rambeau. Bobby Dekeyser, the Belgian-German founder of Dedon furniture company, bought it and transformed it into Dedon Island.

“The designers wanted to preserve our culture and designs. We used all local things such as handwoven fabrics from Baguio, iron wood, carved headboards  made in Cebu and tinalak pillows from Davao,” says Lampert. The launch of this exclusive resort made a splash in the international press.

9. Design duo Tony Gonzales and Tes Pasola  refurbished the Jiyuan tea house in Shenzhen, China.  The project was a renovation of an old building. Gonzales worked carefully to preserve its architecture while infusing modern elements. “The interior is ornate. It bridges the old and the new.”

He worked on everything, from the logo to the menus, furniture and lighting.

10. Architect Calvin Tsao and celebrity events planner David Monn graced the Manila FAME. Two of the most influential names in design visited the Philippines upon the invitation of designer Josie Natori.

Tsao designed Mercer Hotel in New York, Joyce Boutique in Hong Kong and Suntec City in Singapore, among others. Monn has done big events for celebrities and White House state dinners. He is the planner of choice of America’s billionaires. After seeing the Manila FAME show, they were impressed with Filipino design and craftsmanship works that celebrate Filipino ingenuity.

“Here I find playfulness and exploratory quality,” said Tsao in an interview.