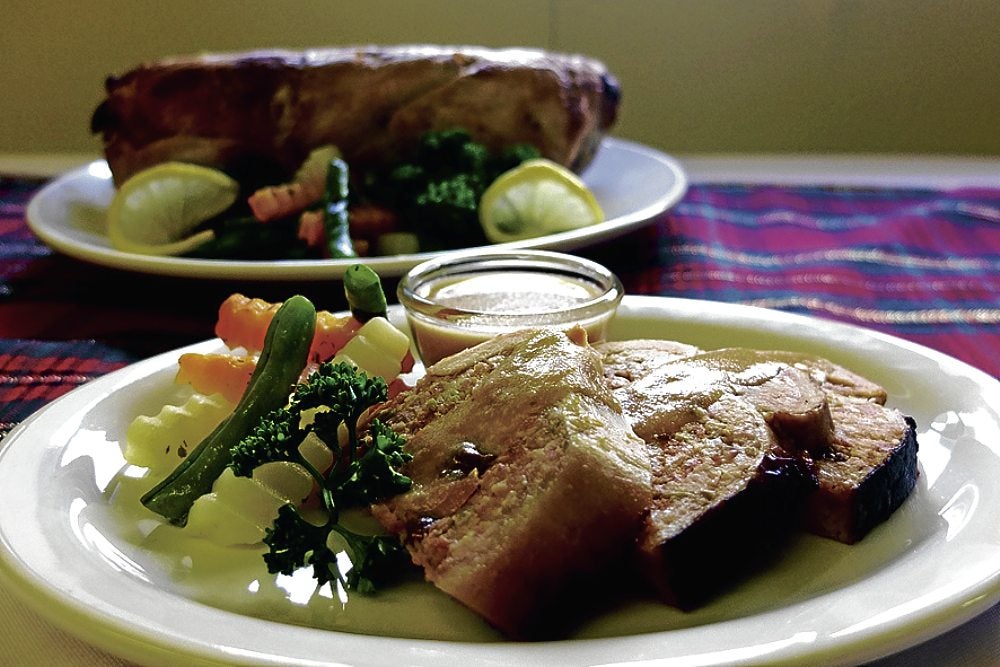 Both were dished out with equal aplomb by Dr. Efren “Boy” Vasquez during a recent class on Noche Buena feasts at the Maya Kitchen Culinary Center. Formerly one of the country’s top obstetrician-gynecologist, Doc Vasquez is also the owner of the hugely popular Café Juanita and the recently opened Haru Sushi Bar and Restaurant. Which is probably why he is as conversant in social affairs as he is in affairs of the kitchen.

“Keep in touch with the child within you,” he advised while demonstrating how to prepare ratatoy, the vegetable dish that he based on the French ratatouille. Without missing a beat, he shifted to cooking mode and told the audience to put the fresh tomatoes and fried capers when the vegetables are almost cooked, to add some crunch to the dish.

“You have to nurture your relationship with your husband when the children are already grown,” he said to the women in the group. Just as quickly, he told them to use a deep pan when cooking the halayang mangga because the mixture sputters.

Aside from the aforementioned dishes, Doc Vasquez also demonstrated how to prepare other customer favorites in Café Juanita: bringhe, rellenong manok, lengua and baked salmon. For every cooking tip he dispensed, there was a corresponding food for thought, and sometimes, with his inimitable sense of humor, he’d also crack a joke or two.

Certainly no one went home hungry that day, whether for food, for laughter or for bits of wisdom. At the end of the class, Maya Kitchen served all the dishes demonstrated by doc—and every bite was as delicious and satisfying as the lessons they learned.

Here’s Doc Vasquez’s recipe for chicken relleno, which you may want to serve for your Noche Buena feast this Christmas.

Debone the chicken, leaving it in one whole piece (or you can have the chicken vendor do this for you when you buy the chicken). Marinate the chicken in seasoning and juice of calamansi for one hour.

Preheat oven to 350°F (180°C). Mix together the ground pork, ham, pickle relish, raisins, olives, cheese and the beaten eggs. Season with pepper. Stuff the mixture into the deboned chicken. Insert the Vienna sausages, hard-boiled egg and chorizo within the chicken. Sew the opening of the chicken to enclose the stuffing completely.

Wrap the stuffed chicken in buttered aluminum foil and arrange in a baking dish. Cook in the preheated oven for one-and-a-half hours or until chicken and stuffing are fully cooked.

Open the foil and set the oven to broil. Broil the chicken for around 15 minutes or until the surface of the chicken is golden brown.

Remove the chicken from the baking dish and reserve the drippings for making the gravy (recipe follows). Cool the chicken slightly then slice and serve with the gravy.

Drippings from the cooked chicken

Melt the butter in a thick saucepan over low heat and slowly incorporate the flour. Pour in soup stock, little by little, stirring continuously so lumps don’t form. Add chicken broth cube and drippings from the chicken. Blend well until sauce is smooth. Season with pepper. Stir and heat through. Serve as gravy for the chicken.

From Doc Vasquez: Before using the raisins, soak them in brandy for several minutes. Then dredge them lightly in flour before adding to the ground pork mixture.

Do not overstuff the chicken. If some of the stuffing won’t fit inside the chicken, reserve the extra and cook into a meatloaf (it makes a great embutido).

If desired, you can also butter the surface of the chicken after buttering the aluminum foil.

If the gravy is too thick, add more liquid. It’s best to use soup stock, but if not available, just use water.