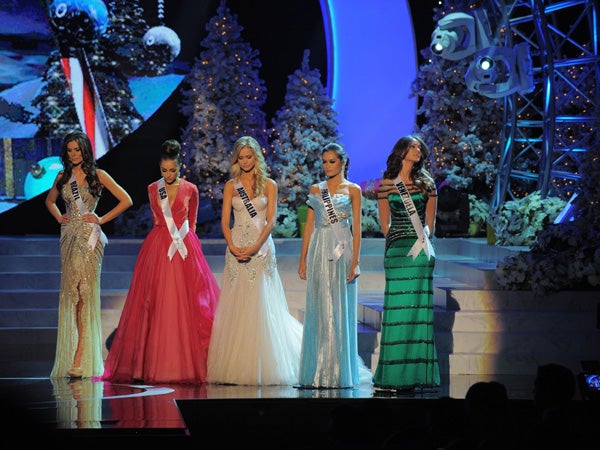 LAS VEGAS — The contest that will decide the next Miss Universe was narrowed to five women Wednesday night, including Miss USA, Miss Brazil and Miss Philippines.

Favorites Miss Australia and Miss Venezuela were also among the beauty queens who made it to the interview round during the televised competition at the Planet Hollywood casino on the Las Vegas strip.

Contestants from 89 countries on six continents spent the past two weeks in Sin City, where they posed in hardhats at a hotel groundbreaking, took a painting lesson, and pranked hotel guests by hiding in their rooms.

The beauty queens took the stage in tight, pleated mini-dresses with glittering sequin bodices and sky high platform shoes, strutting to the hit “Live While We’re Young,” by English-Irish boy band One Direction.

Later in the two-hour show, they walked a stage decked with white Christmas trees and snow flurry effects, throwing off gauzy white wraps to show off tie-dye bikinis in purples, pinks and blues.

For the third elimination round, they strutted in evening gowns as band Train and Australian singer Timomatic performed. Miss Venezuela’s straight-cut, emerald-colored gown was perhaps the most distinct, its long sleeves virtually invisible but for the navy blue, garland-like trim encircling them. Miss USA’s red velvet number was full-skirted and wintery, except for the deep, plunging neckline. Miss Australia’s gown evoked a wedding dress — pure white with sparkles at the waist and a corset-style bodice.

Miss USA Olivia Culpo, from Rhode Island, was trying to end a long losing spell for the U.S. in the competition. An American has not won the right to be called Miss Universe since Brook Lee won the title in 1997.

The contestants voted to give the Miss Congeniality crown to Miss Guatemala.

Andy Cohen of the Bravo network and Giuliana Rancic of E! News returned to host the pageant, which was back in Las Vegas after being held in Sao Paulo last year.

Asked on the red carpet whether he found playing in the World Series or judging the beauty pageant to be more difficult, Sandoval said both were hard.

Miss Universe 2011, Leila Lopes of Angola, sported a low-cut sequined gown and said she expected this night to be the worst part of her year. She offered some advice to the women vying for her crown.

“Be calm and smile,” she said. “Smiling helps a lot. Even though they are not relaxed, the judges will think that they are.”

Sharply dressed women and men, including a large contingent from South America, held banners and cheered on their favorite contestants.

“I’ve seen them and they are absolutely gorgeous,” said Donald Trump, a co-owner of the Miss Universe Organization. “They’re very nervous and they should be. It’s a billion people (watching).”

Organizers had considered holding the 61st annual Miss Universe in the popular Dominican Republic tourist city of Punta Cana, but Miss Universe Organization President Paula Shugart said that country’s financial crisis proved to be too much of an obstacle.

Contestants in the pageant cannot have been married or have children. They must be younger than 27 and older than 18 by Feb. 1 of the competition year.

The winner of the crown will receive an undisclosed salary, a wardrobe fit for a queen, a limitless supply of beauty products, and a luxury apartment in New York City.

The pageant started as a local revue in Long Beach, California, organized by Catalina Swimwear. It is not affiliated with the Miss America pageant and unlike that contest, does not include a talent section.