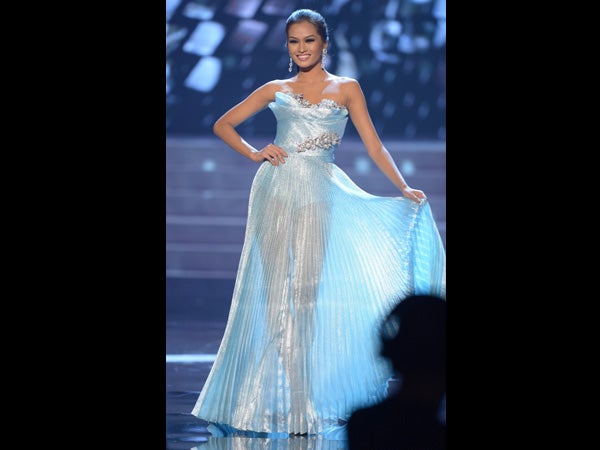 Miss U.S.A. won the crown after making it into the final five with Venezuela, Australia, Philippines and Brazil.

During the question and answer portion, Tugonon was asked “Do you believe that speaking English should be prerequisite for Miss Universe 2012?”

Tugonon answered: “For me, being Miss Universe is not just about knowing how to speak a specific language. It’s about being able to influence and inspire other people.”

“If you have a heart to serve and a strong mind to show people then you can be Miss Universe,” Tugonon said.

The final five was chosen after the evening gown portion.

Tugonon is the latest of a long line of candidates that have made the final five in the pageant. Venus Raj, Shamcey Supsup who joined in the previous pageants also made it into the top five.

Miss U.S.A. brought the Miss Universe crown back to the United States for the first time in more than a decade when she won the pageant.

Olivia Culpo beat out 88 other beauty queens to take the title from Leila Lopes of Angola during the two-hour competition at the Planet Hollywood casino on the Las Vegas Strip.

She won over the judges, even after tripping slightly during the evening gown competition. Telecasters pointed it out but also noted her poised recovery.

Minutes before the middle child of five was crowned, she was asked whether she had she had ever done something she regretted.

“I’d like to start off by saying that every experience no matter what it is, good or bad, you’ll learn from it. That’s just life,” she said. “But something I’ve done I’ve regretted is probably picking on my siblings growing up, because you appreciate them so much more as you grow older.”

The Miss Universe pageant was back in Las Vegas this year after being held in Sao Paulo in 2011. It aired live on NBC and was streamed to more than 100 countries.

Organizers had considered holding the 61st annual Miss Universe in the popular Dominican Republic tourist city of Punta Cana, but Miss Universe Organization President Paula Shugart said that country’s financial crisis proved to be too much of an obstacle.

Asked on the red carpet whether he found playing in the World Series or judging the beauty pageant to be more difficult, Sandoval said both were hard.

Sharply dressed women and men, including a large contingent from South America, held banners and cheered on their favorite contestants.

The pageant started as a local revue in Long Beach, California, organized by Catalina Swimwear. It is not affiliated with the Miss America pageant and unlike that contest, does not include a talent section.

Contestants in the pageant cannot have been married or have children. They must be younger than 27 and older than 18 by Feb. 1 of the competition year.

As Miss Universe, Culpo will receive an undisclosed salary, a wardrobe fit for a queen, a limitless supply of beauty products, and a luxury apartment in New York City. With Associated Press