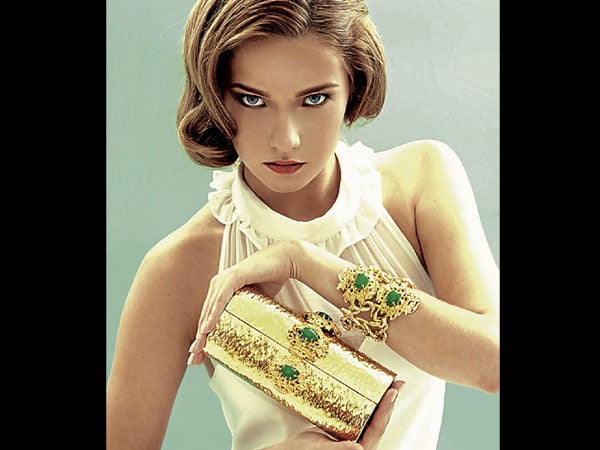 Carissa Cruz-Evangelista–taking after her famous aunt, from luxe bling to minaudieres

Carissa Cruz-Evangelista is proving to be quite the fashion entrepreneur, just like her famous aunt, Josie Natori.

This is Beatriz’s second collection, the first of which was a line of clutches and belts made of vintage Japanese ceremonial obi fabrics, and sold online at www.VitoStudio.com.

Beatriz, named after Cruz-Evangelista’s daughter Isabella Beatriz, 5 (she has another child, Gabrielle Francesca, 3), is a follow-up to her line of bags and accessories made of indigenous materials like t’nalak, which she started selling at SM’s Kultura in May. She also has a collection of envelope bags and cuffs made of fish leather at Tesoro’s. She calls her company Bella Trading and Services.

A former trade assistant secretary, the young mother tapped into her entrepreneurial soul when she left government service. She headed the regional operations when she was with the Department of Trade and Industry, working with small communities in the provinces to help develop local crafts for livelihood.

In many ways, Cruz-Evangelista has continued on with this task, as she still works with local artisans to create designs for her accessories business.

For Beatriz’s Gold Holiday Collection, she produced hammered metal minaudieres and bangles, as well as statement pendants dipped in 24-k gold, with the goldsmiths of Bulacan—luscious pieces that seem the perfect foil for a little black dress. The luxe pieces are also encrusted with semiprecious stones like jade, garnet, onyx and agate.

The Obi Collection was created with a manufacturer from Cebu. She’s also developing another collection for Cura V in Power Plant Mall in time for Valentine’s.

Cruz-Evangelista, who turned 40 this year, holds a Master’s in Business Administration from Boston University. She studied BS Management at Ateneo de Manila University. She worked with an investment bank, then at Morgan Stanley shortly after finishing her MBA, then went on to enroll in California’s Fashion Institute of Design and Merchandising for a course in Apparel Manufacturing Management.

“[I] was unable to finish because when I came back to Manila, I was asked to interview for a government position and decided to join DTI after I was accepted as Assistant Secretary,” she says. “After I rejoined the private sector as a new mom, I thought of a business that I could do where I could still have time with my children. Beatriz became my expression in creativity.”

This woman’s foray in entrepreneurship started at a young age. In high school, she sold garments and accessories from Hong Kong and Japan to local boutiques. Her last year in college was paid for using the money she made from her small business.

“After college, I had a company doing post-production and computer graphics and animation, and had a partnership with some cousins operating 16 ice-cream scooping stations in different malls around Metro Manila,” she adds.

In 1994, a year after graduating from university, she began working for Citem under Eli Pinto “where I worked helping apparel, accessories and jewelry manufacturers and exporters bring their business to the global market.” She handled Japan, Hong Kong and Dubai trade missions, and worked on local trade fairs.

She was also an investor in the relaunch of the Regatta clothing brand shortly after coming home to Manila.

In Cruz-Evangelista’s case, the fruit truly didn’t fall far from the tree. “Entrepreneurship and public service is in my genes,” she says. Her dad is construction firm owner and businessman Philip Cruz, Natori’s brother, while her mom is Pangasinan Rep. Gina de Venecia, who was present at the intimate lunch Cruz-Evangelista hosted recently for the launch of Beatriz.

“My dad built his construction company, and my mom used to sell the santol from their backyard and baked cakes to sell to their artistas and staff at Sampaguita Pictures when she was a child,” Cruz-Evangelista says. “She later did landscaping before she helped her husband, former House Speaker José de Venecia, in the roller-coaster life of public service.”

As for her famous aunt, Cruz-Evangelista says Natori has seen her wares, and her advice to her niece: “Just keep working and one thing will lead to another.”

Knowing the right people and having the right family connections do have their perks, this woman admits. “It is comforting to know that I can somehow be able to borrow a truck from a family member when I need one… I also ask opinions from family and from officers in family-affiliated companies.”

But in the end, she still does most of the dirty work.

“Being an entrepreneur of a small firm means doing a lot of things on your own,” she says. “If no one can drive the truck, you have to! From having a workforce of 3,000 as the head of the DTI regional operations group to having a small company is a huge change. But in both careers in my life, I have been blessed to have talented and wonderful people to work with and I am truly blessed. I just have to keep moving forward.

“The Beatriz brand will constantly be evolving but its design aesthetic will always be toward elegant and modern designs with fine workmanship and as much as possible working with local Philippine craftsmen, designers and artists.”