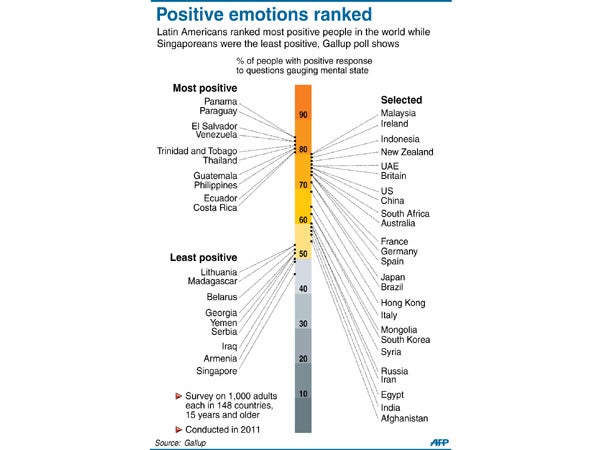 Graphic showing how countries around the world rank for positive emotions, based on a survey conducted by Gallup in 148 countries. Latin American countries were the most positive while Singapore came last.

SINGAPORE—Afghans and Iraqis have been traumatized by years of war but the people of super-rich Singapore are even more miserable, coming dead last in a Gallup ranking of “positive emotions” around the world.

The survey of 148 nations and territories sought to tease out adults’ mental state through five questions such as “Did you smile or laugh a lot yesterday?” and “Were you treated with respect all day yesterday?”

The city-state of Singapore, which ranks in the top five of the world’s richest countries in terms of GDP per capita, was bottom of the pile with only 46 percent of respondents answering “yes” to all five questions.

The survey suggested that Singaporeans felt less rested and enjoy life less than Armenians, who came second last, and Iraqis, who were third from bottom. Afghans were placed 136th out of the 148 countries polled.

Singapore has developed over five decades of no-nonsense government by the People’s Action Party from a sleepy backwater into a thriving exporting and financial hub, and in recent years has tried to promote arts and culture.

But political discontent has intensified as costs of living rise across the board, especially in property. The opposition, which has never held power since the former British colony won independence in 1965, is resurgent.

“When you run a country like a business instead of a country, what do you expect?” one commentator called BeoW posted below an article about the Gallup survey in Yahoo! News Singapore.

“This is a national shame for SG (Singapore),” greenbubble posted on hardwarezone.com.sg.

Gallup, which in another poll last month said that Singapore was the world’s most emotionless society, said its latest survey “may surprise analysts and leaders who solely focus on traditional economic indicators.”

“Higher income does not necessarily mean higher well-being,” it said.

The top three countries in the survey were Panama, Paraguay and El Salvador respectively, and Latin America contributed eight of the top 10, making its residents “the most positive people in the world,” according to Gallup.

The survey polled at least 1,000 adults in each of the countries. Among other nations, Britain came 30th in the poll, the United States was 35th, and China 36th.

The Himalayan kingdom of Bhutan – which has rejected gross domestic product in favor of “Gross National Happiness” to measure its people’s spiritual as well as material well-being – was not in the poll.