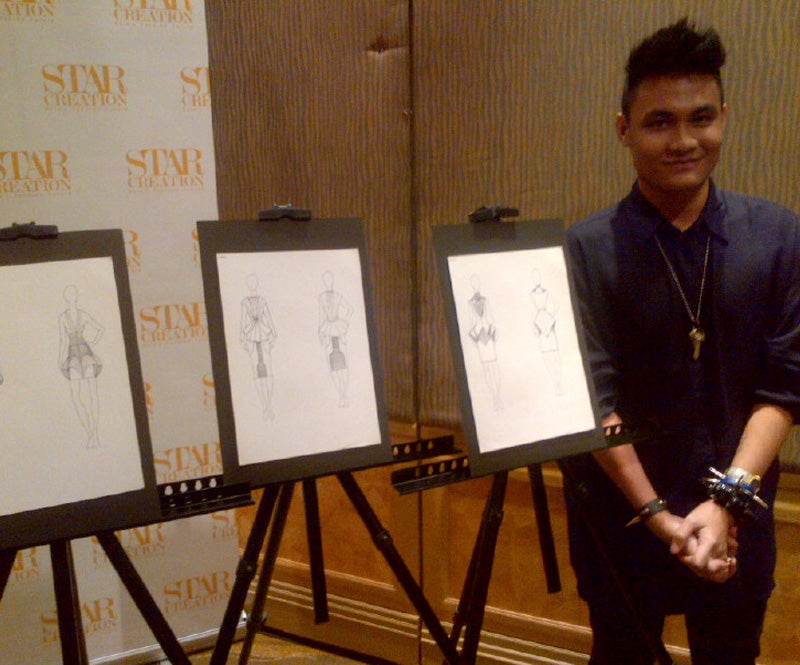 Mike Yapching with his designs at the launching of the 2013 Asian Fashion Exchange.

MANILA, Philippines—Filipino fashion designers are able to compete on the international stage because of their talent, they just don’t know it.

“Filipinos don’t know how good they are,” Yapching said during an interview with INQUIRER.net at the launch of the 2013 AFX.

“[They] should push [themselves] to the limit and see how far that will take [them], it took me to Singapore,” he said.

He encouraged other fashion designers in the country to join the design competition. “They should take a risk, there’s nothing to lose,” he said.

Yapching, a native of Cebu, made it into the final round of the 2012 Audi Star Creation fashion design competition besting 144 others from 13 countries in Asia.

He was one of six Filipinos who competed. In contrast, neighbors Thailand and Indonesia had 20 entries each.

“If one out of six entries can make it all the way to the finals amidst the 144 entries received in 2011, this illustrates the amount of talented designers we have in the country and Filipino designers should be willing to take the chance,” Sherina Chan, Singapore Tourism Board Area Director for Philippines and Brunei said in a statement.

When he joined, he had very little budget and had to ask for family and friends to sponsor him for the competition, he said.

With financial support from one of her aunts abroad, Yapching was able to join the competition and eventually made it up to the finals.

“Audi Star Creation is a real opportunity for people to take in your designs, and learn what you stand for and believe in,” Yapching said.

“Although I didn’t feel I was ready to participate in something so big at the beginning, looking back, I don’t regret submitting my entry because this experience has taught me to be more confident in my work and to be exposed to different design techniques and the marketing side of fashion,” he said.

Entries are being accepted for the 2013 design competition up to January 31, 2013. Those who want to join simply have to send their sketches and entries for the competition free of charge.

Designers who are between 16 and 35 years old with less than two years of experience in the fashion industry are eligible to join. The theme for 2013 is “InspirASIAN” and the grand winner will get S$10,000 in cash and have a one year internship with FJ Benjamin, a well-known fashion retailer.

“Given the huge amount of design talent here in the Philippines, the AFX would be an excellent platform for Filipino designers to participate in,” Chan said.

“We also encourage the Philippines’ fashion design institutions, publications and retail sector to be supportive of the event and leverage the strengths of AFX for greater exposure globally,” she said.