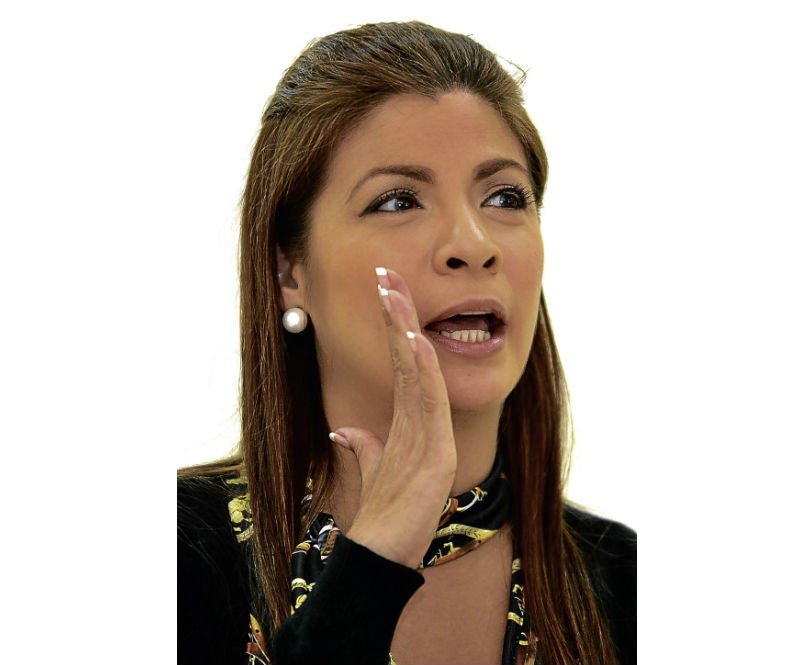 “How’s the house outside? Are we very full? Marami nang tao?”

It’s noon on a Thursday and actress Pinky Amador is getting ready for a different kind of show. Her students, the Theater Arts majors at Meridian International College, have spent the past week working on “MINT Knows Monique Wilson,” a lecture session featuring the theater actress. Monique was scheduled to arrive any minute.

Her students worked on every aspect of the lecture—from the script to the videos and the production, with Pinky guiding them. They did the same last semester for the first lecture, which featured rock singer-actor Mig Ayesa.

“Within two weeks of starting the term, the students had to come up with it. It’s good exercise because they had to gel together,” said Pinky.

It’s a new role for Pinky, whose extensive theater credits include “Miss Saigon,” “Zsa Zsa Zaturnah Ze Musical: Vack With a Vengeance,” “The Sound of Music,” “The Vagina Monologues,” “Peter Pan” and “King Lear,” and who graduated with a Master’s degree in acting from Bristol Old Vic Theatre School, one of the most selective drama schools in the world.

After opening its doors in November 2010, MINT College brought her in as Theater Arts department head.

“I had to design the curriculum, have it approved by the Commission on Higher Education (CHED) and hire and train the teachers.”

Pinky believes her strong ties to theater are a big advantage. “The whole point of having department heads that are embedded in the industry is so that there is a direct connection to the industry. And also, malakas rin ang magiging mentorship program. All the teachers that I’m bringing in are industry practitioners.”

Pinky has rounded up an impressive lineup of teachers including Chari Arespacochaga for Musical Theater, Gabe Mercado for Improvisation, Paul Holme for Shakespeare, Mio Infante for Theater Design, Lyn Fabella for Voice 1, Jake Macapagal for Movement 1 and Issa Manalo Lopez for Movement 2.

That is on top of the regular subjects like Math, Science, Physical Education, History, Philosophy, Foreign Languages, Communication Skills and IT subjects. “The other half of the curriculum is general education. It’s a BA degree. The MINT style of education is, we have more IT subjects because students need that. They have to know the basics—building their own site, having an online presence, we need to teach them that.”

And it’s not just theater either; the course will prepare its graduates for film, TV and even radio work. “We’ll have a semester where they’re learning microphone techniques for radio for voice-overs, because some people make a whole living doing dubbing. We just need to be able to introduce every subject to them.”

Pinky made sure the curriculum would equip her students for life after graduation. “When I created the curriculum, I just sat down and I really thought about what I would need to teach someone, what kind of tools a student would need.”

The school is ready and the curriculum is in place, but she says the hardest part is convincing parents to let their kids study Theater Arts. She said, “I have students whose parents don’t want to support them, so they’re applying for scholarship.”

But some of the students are so passionate about their love for performing that they are fighting for their choice of major, even though their parents aren’t completely onboard.

Twenty-two-year-old Harry David already has a number of plays under his belt, including “Cyrano: Isang Sarsuwela” and Rody Vera’s “Ang Unang Aswang: Isang Pag-aangkop sa Teatrong Pisikal,” a thesis play by Delphine Buencamino (daughter of theater pillars Nonie and Shamaine Centenera-Buencamino). It was his love for theater that made him decide to leave behind a job in New York and return to Manila.

“I flew back to audition for “Ang Unang Aswang.” After that, sunod-sunod na.”

Now a MINT freshman, Harry says he’s happy with his choice. “I love theater here. There’s so much room to grow. And when you enroll in MINT, you’re just so blessed to be in this school. The whole student population is filled with people who are so talented in arts and in business also. The approach is very practical, you get to learn a lot. We are just freshmen and we’re already doing these big projects, and you have people like Mig Ayesa and Monique Wilson coming in.”

Harry was the director/producer of the lecture series.

Chiara Garcia, 17, is also a Theater Arts freshman and the writer who worked on the script for the lecture series. Although she originally planned to study fashion design and marketing, one dance class with the Theater Arts students convinced her to switch courses.

“It feels great here. It’s not just theoretical, first year pa lang you’re doing hands-on application na. It’s a different kind of training. I feel like I’ve grown so much. I appreciate that about theater. When you’re an actor, you put yourself in so many different people’s situations. You’re very broad-minded because you get to open yourself up to so many people’s lives,” she said.

Although her father wishes she’d transfer to Ateneo, “I think it’s more of showing your parents and proving to them that this is really what you’re passionate about. What they always say is go for what you love and everything else will follow. That’s what I’m holding on to right now.”

Pinky said, “What you have to convince parents is that Theater Arts is not a be-all and end-all. It just really makes a person a very good communicator, a very good problem-solver and a person with incredible creative solutions which you can apply everywhere.”

She says parents need to realize that studying Theater Arts can open a lot of doors for students—and not just in the world of theater.

“It doesn’t mean you can only become an actor, a writer or a director. They could also go into other fields like marketing. In any job, you need presentation skills, you need to be able to present yourself, you need to be able to present ideas. By the time a student comes out of the course, they will be the most useful, creative people. When you look at the corporate structure now, the long-lasting and the most effective solutions are creative. In every team building, anong meron? Improv. They’re constantly trying to get people to think out of the box. I think Theater Arts is the best tool for that.”

Even professional theater actors have expressed interest in enrolling in MINT, Pinky said. She is hoping they can soon allow interested individuals to enroll in classes of their choice and get accreditation.

“It’s also good for the students to be working with professionals so they will see the level of discipline and perseverance and just not giving up.”

Next year, Pinky will return to the stage as Edith Piaf, in Atlantis Productions’ staging of “Piaf.” “That’s what I’m rehearsing for. I’m taking French lessons, I’m taking singing lessons, I have her autobiography. Parang thesis.”

When asked how she’s juggling everything, she laughed. “With great difficulty. You hear the sound of my voice?”

Pinky believes the biggest think she can teach her students is something she learned from her aunt, Repertory Philippines founder Zeneida Amador. “A passion for excellence.”

And she stresses the importance of training. “That’s what I’m trying to tell them. I took the time, I left my career. I was offered an international film, I had a game show on GMA, I had a soap on GMA, I had a five-picture-a-year contract with Viva Films but I left all that and trained. And then I got “Miss Saigon.” People just have to trust that it will happen. In a way, my advocacy is train, train, train, train.”