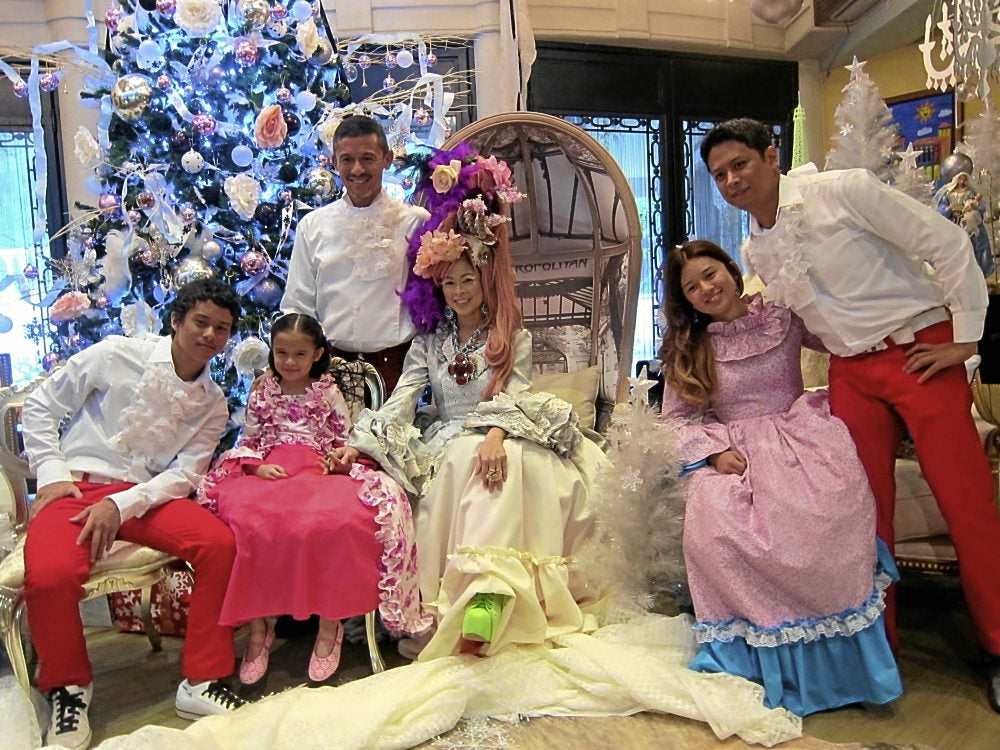 Thank God the world didn’t end on 12-21-12, as the Mayans purportedly prophesied. What would I have worn?

Several parties last Friday had, in fact, doomsday themes. But what does one wear to the end of the world? Many wore alien costumes, hoping that Martians might miraculously conjure up salvation.

My own thoughts are that Martians and cataclysms are bunk. Life is too short, or as the kids say these days, YOLO or “you only live once.”

So instead of bunkering down waiting for whatever, instead, live life to the fullest. Celebrate life!

One such milestone celebration I recently attended was the 20th anniversary of The Travel Club, a retail shop that stocks gadgets and gizmos for world travelers. The auspicious date of the party was the triple 12 itself.

The company is very passionate and innovative with anything to do with travel. They are sensitive in responding and catering to consumer needs with an advocacy of making each and every Filipino a world-class traveler.

One of its owners, Willy Sy, was recently chosen as one of the winners in the MVP Bossing Awards. The awards are a brainchild of PLDT chair Manny V. Pangilinan, the original bossing himself, to annually fete 12 successful entrepreneurs.

Willy is a bossing who is responsible for bringing high quality and stylish world-class products to Filipinos. Among the shop’s brands are Roxy, The North Face, TUMI, Victorinox and many others.

Another MVP Bossing is Myrna Yao of Richwell Trading, the local distributor of Mattel Toys. Myrna is not only a successful entrepreneur, she is also generous with various charities, including ones that I sponsor.

Myrna’s business acumen ranges from Barbie dolls to distributing Goodyear Tires, a business she started in 1980. On top of this, she also serves as the chair of the National Commission on the Role of Filipino Women.

The bossings of Goldilocks Bakeshop were also honored, sisters Milagros Leelin Yee and Clarita Leelin Go. Their homegrown bakeshop is now a worldwide brand, with stores in many countries.

Through the years, Goldilocks has been a staple of Filipino family celebrations—from birthdays to weddings and even town fiestas. Their first bakeshop was opened 46 years ago in Pasong Tamo. They now have a total of 393 stores, with 29 of those in other countries. Theirs is a story we can all be proud of.

Like many successful people, Bernie gives as much as he can to charity. He is an avid supporter of Gawad Kalinga, Habitat for Humanity, Museo Pambata, World Wildlife Fund Philippines and many other worthwhile charities.

At the awards, I chatted with Joey Concepcion, himself a previous Bossing awardee for his successful Go Negosyo program, which, in turn, encourages others to become entrepreneurs. And a few nights later, I met up with Joey again, this time at the 80th birthday celebration of his aunt, Mely Concepcion Hechanova.

Tita Mely invited a powerhouse guest list to her birthday fete, led by former President Joseph Estrada and VP Jejomar Binay, to name a few. The Rizal Ballroom of the Makati Shangri-La was ablaze in orange for the occasion, from the trees to the table settings.

It was wonderful to see Tita Mely in good health and good spirits, surrounded by family and friends. She is truly someone to look up to.

Speaking of parties, we held our family Christmas party last weekend, well ahead of any Mayan prophecies. Our theme this year was “all things Paris.”

Cupcakes by Sonja provided edible Eiffel toppers on yummy cakes, too. Her cupcakes were displayed in an acrylic Eiffel tower stand, graciously lent to me by Mall of Kitchen.

This huge, warehouse-type store along Kamagong Street in Makati City has a great selection of dining and kitchen items for the home and commercial needs.

For drinks, we had three bars. Vask Restaurant, which opens early in 2013, provided a menu of drinks. That quintessential French liqueur, Cointreau, set up a bar emblazoned with the image of their brand ambassador Dita Von Teese. Events stylist Pido Villanueva created a miniature, black-and-white Eiffel Tower.

Pido also arranged the setup with grapes and French wines for all the guests to enjoy. Adding to the table setup were pink roses, thanks to Patricia Pastelero. Party pics were taken by Klay Tan.

This year, we also got a band—the New Sub Project— who blew the guests away with their cool brand of music. I love giving away prizes, and we had them all stuffed in Paris-themed grab bags: products from Zenzest, National Book Store, Unilever, Swatch watches, Freeway, Olay cosmetics and Bench goodies, among many others.

At the end, we even had thank-you cards, graphic designed by Adworks Graphics from images taken by photographer Francesca Baraguer. I got the entire family to dress up in French ruffles.

My little Athena was not too happy about having to dress up, but it all turned out well in the end. The pictures looked good, and even the Mayans were dead wrong.