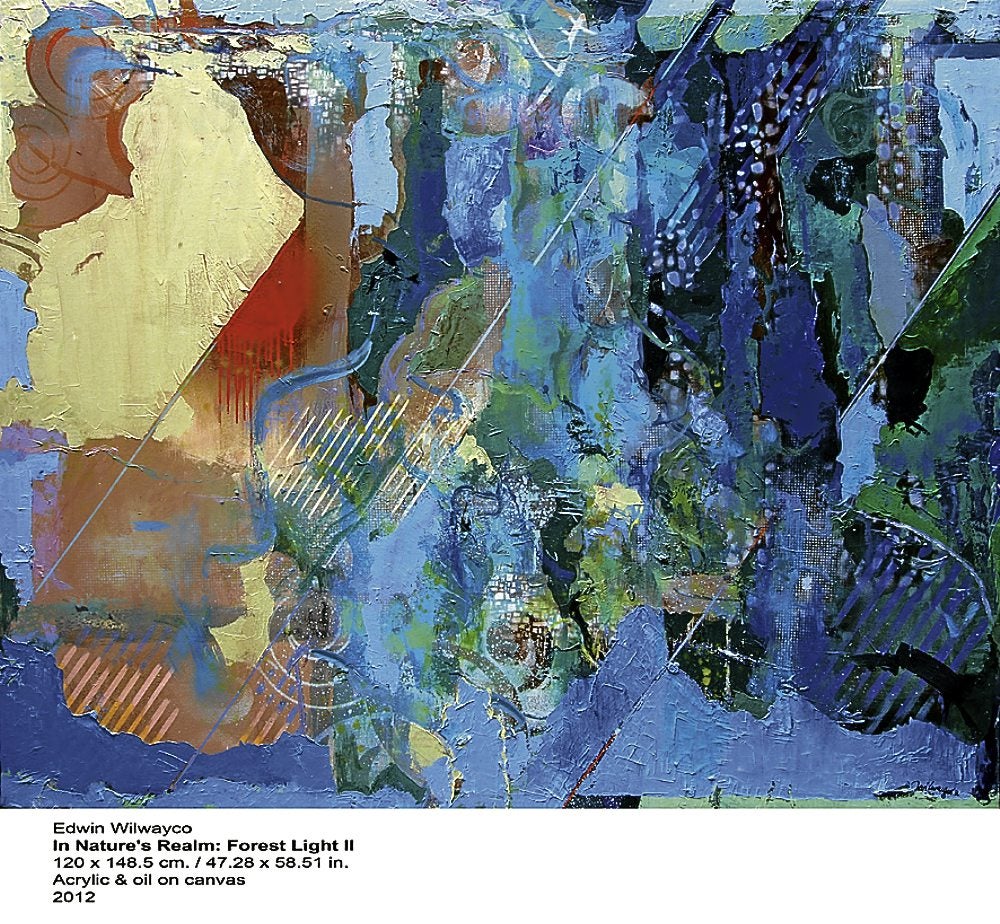 “I believe in God. Only I spell it Nature.” That intriguing statement from the great American architect Frank Lloyd Wright precisely intersects with the sentiments of Filipino artist Edwin Wilwayco who, with his deeply felt Christian beliefs and choice of a pervasive artistic theme, celebrates with another outpouring of artworks in a show steadfastly titled “In Nature’s Realm: So Quietly the Earth.”

True to his conviction, Wilwayco considers Nature as analogous to the numinous. In his view, the wonders of nature, with its stillness and cataclysm, are but the charged expressions of presence of the Supreme Being.

Now based in Providence, Rhode Island, Wilwayco revisits the country annually, laudably coinciding with an exhibition of his recent works. In the quiet isolation of his US studio, Wilwayco, who has been steadily producing a tremendous body of works, now presents a large suite of paintings that throb with unexpected technical surprises and chromatic density.

Patently loyal to the idiom of Abstract Expressionism, which his UP mentor, the late National Artist José Joya inculcated in his students, Wilwayco, through the past three decades of his artistic career, has internalized, indeed inhabited, the nature, as well as the trademarks, of this canonical style: “the elimination of specific subject matters and a preference for spontaneous, impulsive qualities of experience and the use of the unfettered brush—discursive, improvisatory techniques—motion, motion organization, and an activised surface.” All are triumphantly present—and in accelerated pace—in Wilwayco’s “Nature” works.

To be sure, Wilwayco has always referenced the sacred and the divine in the primacy of his emotions. More than the investigation of space, or the activation of textures, more than the vibrancy of colors or the complexity of composition—the artist concerns himself with the resonances of abstraction as a spiritual language, conveying meanings that are profoundly affecting, if not life-changing. Exaltation is itself an impetus for the transmission of painterly energies embodied in such works as “Dance of the Blessed Spirit,” with its whirling vortex seemingly spiraling out of control, or “Swan’s Reflections,” with its organic luxuriance, coiling tendrils and flux of roots.

One senses the feeling of intoxication in the exuberant “Secret Pond,” as though hardly able to contain the ceaseless aquatic activity and organic growth. Rains and rivulets of water are summoned by the imagery of “Sense of Wonder,” with the viewer led to an unfamiliar domain where the physical landscape blends with unnamed natural forces. In “Keeping the High Water,” areas of turquoise flood the space with a turbulence of textures, affirming layers of clotted pigment cloaked underneath but breaking into light in unexpected fissures and cracks. How one can order this seeming chaos of slashes and smears, drips and trickles, and sprayed paint radiant through sieves of stencils, invites by turns curiosity and admiration.

A fresh, invigorating touch which Wilwayco introduces in this show is the use of their diagonal bands, with their rich and immediate sensation of forests and mountains, streaked with light, and their resemblance to slanting windswept rains. Felicitous is the empathy with nature that is generated by this simple graphic expedient, transforming strips of lines—with air breaking in between—into an almost visual pulsation. This evocation of nature came upon Wilwayco on a pleasant, casual trek through the woods. The visual motif took hold of his imagination and indeed inspired Wilwayco’s entire “In Nature’s Realm” series.

A luscious preponderance of vivid, warm colors, intense nuances of reds and oranges immerses the viewer in Wilwayco’s landscapes, recalling the words of American abstractionist Joan Mitchell: “It’s a secure landscape not desperate. I’ve chosen one you can live in.” Interestingly, Wilwayco’s kinship with grays is put to great advantage, invoking a chilly, brooding tonality to the works. The artist’s partiality toward various shades of blues implicitly bound him to the vitality of both aquatic and spiritual forces, moving unhindered in nature’s realm.