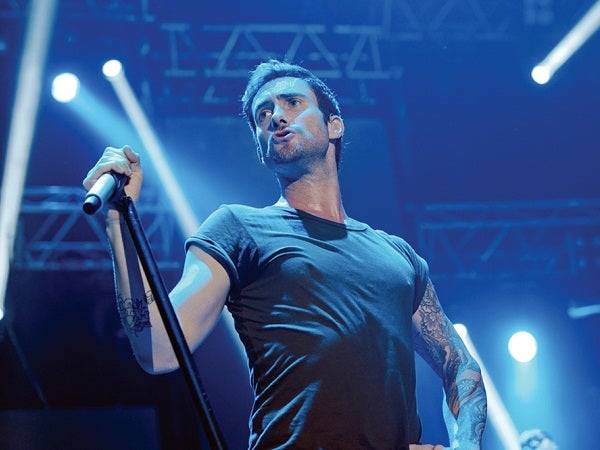 Yeah, we know you’re still reeling from the relentless onslaught of concerts this whole year. We are, too. 2012 snuck up on us when we weren’t looking, and stole our hearts along with our wallets. If this year was any proof, more and more foreign artists seem to be realizing just how much Filipinos love a good show, with concerts scheduled almost every week (or, during “peak months,” two to three per week!).

Can 2013 top this one? Maybe, maybe not. But we sure can’t wait to find out. Let’s take a look at some of the most memorable moments from the past gigs. Feel free to add yours.

We thought Cobra Starship front man Gabe Saporta’s pants-ripping accident at the Smash Project concert was pretty memorable, but our favorite moment would have to be Chris Carrabba popping out from backstage and singing (or growling) along with The Used front man Bert McCracken for “A Box Full of Sharp Objects.” As it turned out, the Dashboard Confessional front man had more jaw-dropping surprises up his sleeve: hours after the concert, he ended up doing an impromptu jam session with the house band at Seventh High in Fort Bonifacio until 4 a.m., just because he felt like it.

Talk about a monster debut. As the first show to be held at the SM MOA Arena, Lady Gaga’s concert last May had been so in demand, a second night was added amid protests from religious groups. Mother Monster was literally larger than life; in true Gaga fashion, the concert didn’t scrimp on props, theatrics or politically cheeky comments. Trivia: “The Vampire Diaries” heartthrob and Penshoppe endorser Ian Somerhalder was spotted at the second show.

Two legendary boy bands on one stage. This was bubblegum pop history right here, the defining moment for every ’90s teenybopper who had grown up with their music. There’s a whole slew of squeal-worthy moments from that June 3 show: the BSB men serenading female audience members onstage, Jordan Knight being, well, Jordan Knight, Donnie Wahlberg flaunting his muscled torso, the nine doing a group hug while dancing in circles, Joey McIntyre and AJ McLean donning the same pair of leopard-print cycling shorts… Or maybe not the last one. If you paid a lot for this concert (which we’re sure you did), good for you—this lovely, lengthy trip down memory lane was worth every peso. Yes, even for Kevin Richardson fans.

So they came at a bad time. Because of the unnamed monsoon disaster that struck the metro last August, the much-awaited concert week started on a sad note. But as they say, the shows must go on; having braved the floods, The Smashing Pumpkins delivered an incredibly heartfelt performance that lifted Manila’s visibly dampened spirits. For the sake of those who weren’t able to watch, we hope Billy Corgan and his new crew make good on their promise to come back.

‘Just say yes, ’sang Snow Patrol… and she did

A picture is worth a thousand words. In this case, only one word mattered. Photographer Magic Liwanag’s sweet marriage proposal to PR manager Jad Deveza during Snow Patrol’s performance of “Just Say Yes” had everyone’s blessing, including the band’s. Now that’s how you propose, guys!

Who would’ve thought she’d be one of the first in a loooong line of foreign artists to cover that song? For her Aug. 16 show with Gym Class Heroes, the sexy lady suddenly segued into a now-familiar horse dance segment with her crew wearing neon wigs. The Psy fever hadn’t completely taken over Manila yet that time, which had left half the crowd wondering what song of hers that was. But we all whooped and danced anyway.

It might’ve been M5’s third time here, but thanks to “Moves Like Jagger,” tickets to their Sep. 18 concert sold out faster than you could say “Adam’s abs.” The Big Dome was like the MRT on rush hour, a sardine can full of people singing and swooning over Adam Levine and his sexy… Um, music. Too bad he kept his shirt on. Despite the clamor for one more night, the pop rock band only had time for one Manila show, but at least we were still able to drool over Adam’s Bench billboards along Edsa long after that.

Foster the People, all pumped up

The sleeper hit award goes to… this indie trio. It was the mother of all pumped-up concerts, pun intended. Did it matter that you only knew one song? Nope. People were actually surprised by how thoroughly entertaining this Oct. 6 show was, so much so that one could’ve gone in a stranger or a skeptic and come out a fan.

Three words: “Wow, fantastic baby!” Okay, so that wasn’t exactly original. But, really, there’s just no other way to describe the utter madness that transpired at the SM Mall of Asia Arena last Oct. 24. For the thousands of Pinoy K-pop fans, Big Bang’s “Alive Galaxy Tour” was pure eye and ear candy from start to finish. G-Dragon threw his jacket into the Lower Box area,Seungri sang to a stuffed panda, Taeyang gyrated shirtless (twice), Daesung cheerfully dumped water on the other boys’ heads, and TOP danced for the finale wearing glittery pink bunny ears. Priceless.

Katy Perry’s California Dreams Tour at the SM Mall of Asia Concert Grounds in January was incredible—and not just because Manila was its final stop. The show was an explosion of sparkle and sugary goodness. Our favorite parts: Katy performing the song “Peacock,” the search for Katy’s Manila boyfriend (she ended up choosing actor Ivan Dorschner), the stripped-down version of “The One That Got Away,” the fireworks during Firework and the encore, “California Girls,” which gave us beach balls, gingerbread men and Katy’s bubble gun. The concert was fantastic. We still couldn’t forget it.

“You know all about goosies, don’t you?” Jennifer Lopez asked the crowd at her Nov. 26 concert at the SM Mall of Asia Arena. She wasn’t the only one with goose bumps that evening. It took the singer over twenty years to make it to the country for a performance and she was worth the wait. She gave the huge audience a lot of love, reaching out to her fans, trying to touch their hands. “They put you too far tonight,” she said at one point. The sight of her holding up the Philippine flag will forever be imprinted in our minds. She was breathtaking, she had insane energy, she was a total performer. We’re still reeling from the experience.