Getting to know Gangnam–and loving it | Lifestyle.INQ ❮ ❯ 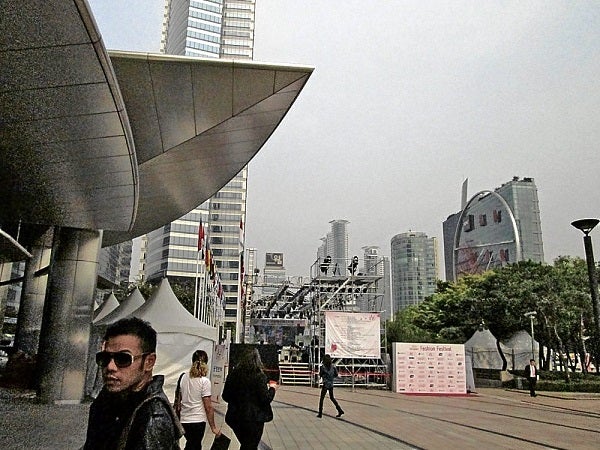 Getting to know Gangnam–and loving it

It’s 4 a.m. in foggy Gangnam, and I’ve just found out that I’ve missed Psy’s monumental free concert at Seoul Plaza by a few hours. The irony isn’t lost on me, but it matters little. After all, I’ve finally arrived in the very place that the South Korean rapper’s sensational dance single has, quite literally, put on the map.

As I am about to find out later that day, I actually can’t have come at a better time.

As fate has it, our Seoul familiarization tour party has arrived smack in the middle of the annual Gangnam Festival. Just on its sixth installment, the festival has kicked off with the International Peace Marathon, followed by a three-day Fashion Festival, Gangnam Grand Sale, and Hallyu (Korean Wave) Festival.

It gives a first-time visitor like me the golden opportunity to get to know Gangnam at its best and busiest.

Oh, and there are no flash mobs dancing “Gangnam Style.”

We stay at the Hotel Riviera in Gangnam’s business hub in Cheongdam-dong, a few minutes away from the main shopping and entertainment areas. Gangnam, which means “South of the (Han) River,” is one of the most affluent districts in Seoul.

That much is obvious from the start, especially in the upscale neighborhood of Apgujeong, where luxury brands and chic vintage shops sit alongside the most expensive residential properties in South Korea.

All rueful thoughts of missing Psy’s live performance are completely forgotten as soon as we hit the streets. He might have poked fun at the nouveau riche lifestyle of its residents, but no one can deny that Apgujeong lives up to its nickname—the “Beverly Hills” of Seoul.

Periwinkle Porsches, cherry-red Alfa Romeos and sleek Mercedes Benz sedans cruise past Armani and Prada flagship stores, while local fashionistas in early autumn wear sip their drinks in chic cafés. Catering to the beauty-conscious lot, skincare stores and cosmetic surgery clinics are almost as numerous as the cafés found in every block.

Apgujeong has its version of Rodeo Drive, called Rodeo Street; it’s undoubtedly the place to see and be seen, especially for young hipsters. Plus, it’s where the headquarters of K-pop company SM Entertainment (Girls’ Generation, Super Junior) and the homes of certain celebrities are found, so this is the perfect place for “stargazing.”

Outside of Apgujeong, the district looks somewhat less intimidating, but you can still feel the high cost of living. Under normal circumstances, the shopping scene might prove daunting to visitors on a budget, so the words “Gangnam Grand Sale” are like music to a shopaholic’s ears.

One can get items for up to 60 percent off in department stores, plus some extra discounts in over 200 boutiques, restaurants and other establishments. From popular cosmetic brands like Etude House and Tony Moly to H&M and hot new Korean label 8Seconds, the red sale banners posted everywhere make our heads spin and our wallets bleed.

The Galleria Department Store just across Rodeo Street is a good one-stop shop where you can get your Vuitton or Chanel fix and do some grocery shopping. For the less brand-conscious shopper, the Gangnam Underground Shopping Arcade has bargain gems under 10,000 won (roughly P370), from clothes and shoes to K-pop goodies to even potted plants.

In between frenzied shopping trips, we are able to take a short tour of the massive COEX complex in Samseong-dong, the venue of the Fashion Festival. The complex houses the famous COEX Mall, Asia’s largest underground shopping center where the COEX Aquarium and the Kimchi Field Museum are found.

Beside the Mall are the high-end Hyundai Department Store, ASEM building and Trade Tower. (Trivia: In the music video, Psy is seen dancing atop the ASEM building with the Trade Tower in the background.)

At the Outdoor Square, we see models in traditional hanbok (Korean dress), evening wear and avant-garde pieces rehearsing their runway sashay onstage. Nearby, people are unloading their funky wares under white tiangge tents lining the walkway. The three-day fashion show features Seoul’s big names in fashion, and also gives aspiring designers and students a chance to showcase their talents before the world.

The highlight of the festival was a special K-pop concert in nearby Yeongdong Boulevard. For lucky passersby and fangirls on a budget, this is a once-in-a-lifetime event. Not only was it a free show, it also had SM Entertainment’s hottest global acts and Gangnam’s spokesmodels—Girls’ Generation and Super Junior—sharing the stage with other idol groups such as TVXQ and Sistar.

At night, the district literally comes to life. The whole maze of bright lights and alleys filled with countless shops reminds one of Osaka’s Shinsaibashi area. Gangnam’s main boulevard, Gangnam-daero, is so wide that we are tempted to gallop our way across, but the idea of horse-dancing in the middle of a bustling area alongside the world’s best-dressed pedestrians doesn’t really sit well with our egos.

Most shops close at 9 pm. There are several notable hotspots in Cheongdam-dong, like Club Answer and Ellui. Interestingly, most young night owls prefer sleeping on a bench somewhere and waiting for the subway to resume operations at 5:30 am rather than spend a staggering amount on cab fare. It’s understandable, as entrance fees and drinks already cost an arm and a leg.

For those who prefer to just chill out and people-watch the night away, any café is a good choice. The coffeeshop culture in Korea has reached insane heights; cafés are everywhere, and they are always crowded no matter what time of day.

Gangnam in a nutshell

Gangnam might have that viral video by Psy to thank for drawing so many tourists in just a few months, but there’s definitely more to the swanky district than meets Psy’s eye.

It’s also remarkable to witness how Gangnam, by way of its annual festival, is directing its own efforts in globally promoting South Korean culture—in fashion, beauty, arts, or entertainment.

To be honest, I’d much rather hunt for bargains in Myeongdong or Insadong, but I’m glad that I finally get to see what the hoopla is all about.

The next time I find myself in the district, I’ll make sure to check out other tourist hotspots, such as Bongeunsa Temple, just north of COEX, where visitors can enroll in a “Temple Stay” and live the life of a Buddhist monk for a day or two; and charming, artsy Garosugil (“tree-lined street”) in Sinsa-dong, which is full of gingko trees that must look especially pretty in autumn. But most of all, I’ll make sure I have plenty of cash to spare.