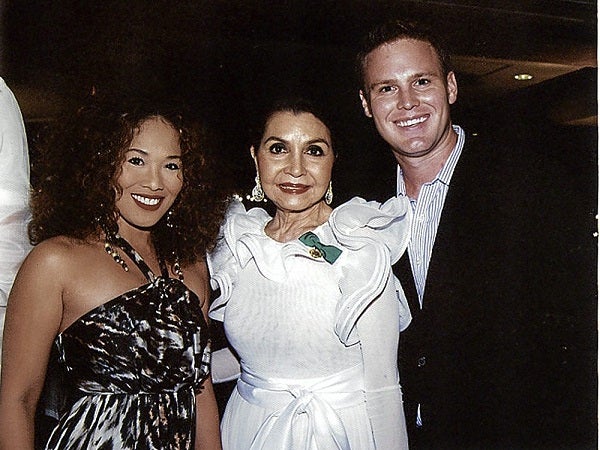 The Cebu Chapter of La Chaine des Rotisseurs held its anniversary gala with a Christmas theme at Salon de España of the Casino Español de Cebu. It was a dressy affair, especially for the ladies who came in long gowns, and jewelled.

Standing out was Amparito Llamas Lhuillier, who heads La Chaine in Cebu. Beside her, ever gallant, was Honorary Consul of France Michel Lhuillier who is the bailli delegue of La Chaine for the Philippines.

Crystal flutes bubbling with Brut Blanc de Blanos were passed around along with trays of canapés of mozzarella, shrimps over Japanese cucumber, and salmon with quail eggs topped by caviar.

A Chaine occasion is first and foremost a gastronomic event of the first water, and this was one such. It also has to do with elegance as in impeccable table settings and décor. Amparito had decreed floral arrangements in vivid colors. Teresin Mendezona complied.

Seated with Michel and Amparito was their son Michael Lhuillier, who flew in a few days before from California. Also with them were La Chaine-Cebu board member Winglip Chang, Bo and Hans Hauri (general manager of the Marco Polo Plaza Hotel), and guests from Saudi Arabia—Eric and Devie Huyer, Brian and Angelita Mosher.

The mood was set from the very start with Ben Casquejo tinkling on the piano more than 50 golden ditties among which were “Fascination,” “Embraceable You” and “Again,” which he could have played again and again and again. So soothing.

The sautéed scallops were followed by an aromatic consomme of ostrich. Viognier Laurus 2010 was poured with the baked salmon fillet garnished with mushrooms and almond slivers. The sorbet of swished watermelon and cider was very refreshing.

Entertainment numbers were presented between courses, beautifully sung and danced by scholars from the Amparito Llamas Lhuillier Educational Foundation at the University of San Jose-Recoletos.

One scholar who has attained international fame, Anna Fegi, was very much applauded. She and her husband Adam Brown had come to Cebu to spend the holidays.

Onstage to award the Casino Español staff were Michel, Amparito, Teresin as well as board members Dr. Nestor Alonso, Al Evangelio and Dave Sharpe. Dr. Vivina Yrastorza was unable to attend as it was her birthday and had an intimate gathering at her home.

Rafaelita Pelaez was in town for the occasion, escorted by her son, award-winning pianist Rudolf Golez. She informed friends that Rudolf’s next concert will be in February at the auditorium of the family-owned Liceo de Cagayan University in Cagayan de Oro. He will be soloist in the Rachmaninoff Concerto for Piano No. 2, accompanied by the Cebu Philharmonic Orchestra.

Al Evangelio was cited as being with La Chaine since it was founded in Cebu 20 years ago. With him were Gabby Leyson and Tina Jordana, Vilma Alcara, Harry Montanus, Gerry Montanus, Pamela Manuel, Marco Bernelo, Joey Osmeña and Ian Dale Tan.

Rosemary Dakay attended with her pretty daughters Meme and Rere, and her dashing songs BJ and Pierre Dakay. With them were Allan and Lisa Mill Irving, Ben Dimaano, Richard and Justine Sharpe, Stephanie and Michael Sharpe.

Dr. Nestor Alonso, a pillar of La Chaine in Cebu, was with his pretty wife Jojie, sharing a convivial table with Glenn and Honey Loop, Bayani and Russel Atup, Alice Plaza and her son Rolando Nicolo who is an accomplished chef, Mary Janice Kauco, and beauteous Iris Fernan Arcenas with Eva Gullas.

Amparito announced that the next Chaine gala will be in March at the Shangri-La in Mactan, and that the Christmas 2013 will be next December at the Marco Polo Plaza.