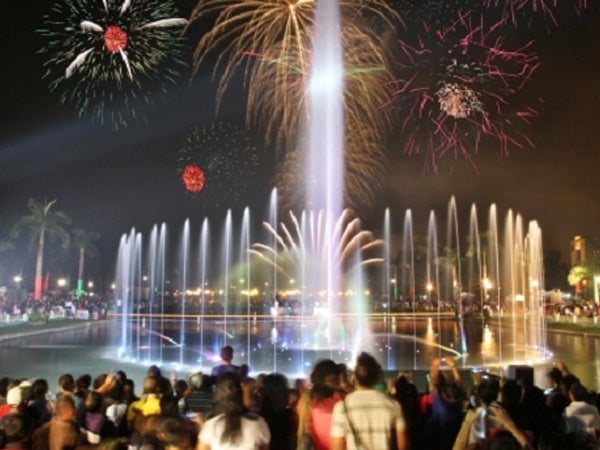 PARIS–As the clock strikes 12 on Monday, millions will pop champagne corks and light fireworks while others indulge in quirkier New Year’s rituals like melting lead, leaping off chairs or gobbling grapes.

One of the world’s oldest shared traditions, New Year’s celebrations take many forms, but most cultures have one thing in common — letting one’s hair down after a long, hard year.

For much of the globe this involves sipping bubbly with friends until the sun comes up, seeing out the old year with bonfires and flares and off-key renditions of Auld Lang Syne.

But others have rather more curious habits, often steeped in superstition.

In Finland, say tour guides, people pour molten lead into cold water to divine the year ahead from the shape the metal sets in. If the blob represents a ship it is said to foretell travel, if it’s a ball, good luck.

In Denmark, people stand on chairs and jump off in unison as the clock strikes midnight, literally leaping into the new year.

(The Danes also throw plates at their friends’ homes during the night — the more shards you find outside your door in the morning the more popular you are said to be.)

The Dutch build massive bonfires with their Christmas trees and eat sugary donuts — one of many cultures to consume round New Year’s foods traditionally believed to represent good fortune.

Spaniards, in turn, gobble a dozen grapes before the stroke of midnight, each fruit representing a month that will either be sweet or sour.

In the Philippines, revellers wear polka dots for good luck, while in some countries of South America people don brightly colored underwear to attract fortune — red for love and yellow for financial success.

Despite regional and cultural differences, for most the New Year’s festivities are a chance to let off steam before the annual cycle starts all over again.

“This is a holiday that is about relaxation and letting go,” explained George Washington University sociologist Amitai Etzioni.

“The whole year people are chained by social requirements, morals, laws… “And then there comes some occasion in which society says for today, 24 hours, for this evening, all bets are off, all norms are suspended, and it’s OK.

“The next day we have to get back in line.”

Historians say people have been marking the year change for thousands of years.

The ancient Romans, who gave us the solar calendar, celebrated in a way similar to ours.

“It was a day of public celebration. People spent the day playing, eating and drinking,” according to French historian John Scheid of the College de France.

“During the period of the empire, the first four centuries AD, this originally Roman custom became a general festival in the whole Roman world, and so it remained until today.”

January 1 became the day widely marked as New Year’s Day only in 46 BC, when the emperor Julius Caesar introduced a new calendar. March 1 had been the first day of the year until then.

In 1582, Pope Gregory XIII replaced the Julian calendar with the Gregorian one, correcting mathematical inconsistencies.

Most Catholic countries immediately adopted the calendar and its January 1 start, but Protestant nations did so only gradually.

Britain and its then-colonies, including the United States, were among the last to introduce the new calendar, from 1752.

While most of the world has now adopted January 1 as the official start of the year, some still hold their festivities on other dates.

Orthodox churches celebrate on January 14 (January 1 on the Julian calendar), while the Chinese New Year can fall on any date between January 21 and February 20, depending on the position of the moon.

This year, it will be February 10.