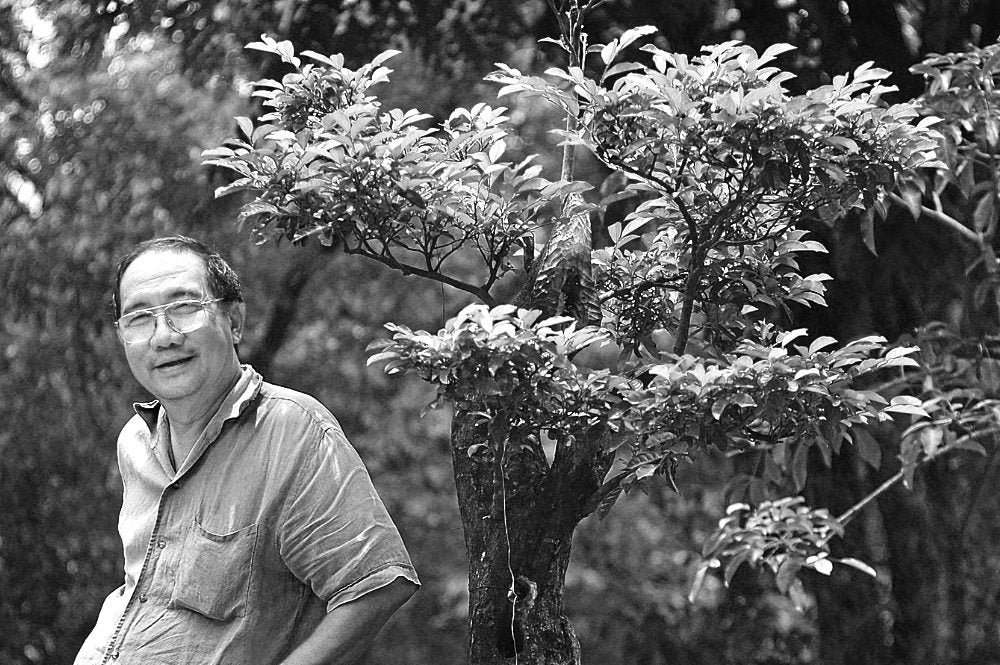 Jerry Araos, artist who ‘competed with bakeries’ for his wood sculptures; 68

“Our comrade in arts and letters, even in ‘gourmandizing,’ Jerusalino V. Araos, 68, Jerry to all of us, died peacefully in the bosom of his family last night at his Diliman residence,” said writer Babeth Lolarga on her blog Dec. 24.

“The reader may choose, if you don’t pray the old-fashioned way, to remember him for a quiet second amidst your holiday preparations—for qualities, among many, like his true compassion and mamon heart underneath the seemingly hard shell of irreverence or kabastusan, his never-ending zest for life up to the very end,” Lolarga said.

“He considered himself a communist, never turning his back on the theory and praxis of his beliefs while remaining an abiding Christian, two contradictions that he carried with so much grace and élan,” she wrote.

Araos was a sculptor and landscape artist.

At the Araos Garden in Fairmount Hills, Antipolo, are featured his “Luklukan Chairs,” wooden sculptures of the human torso carved in such a way as to accommodate the rumps of people sitting on them.

In a 2007 interview with Lolarga, he offered the following thoughts:

“The language of sculpture is a mixture of the grammar of my tools and the jargon of materials. The message of the sculpture must be a three-way dialogue among the sculptor, the material and his tools.”

“Old houses, whether mansions of the grand manner or humble huts, are being replaced by condominiums by the very rich and Italianate cottages by the beneficiaries of overseas domestic helpers. Whatever old houses are left in Manila and its environs must be preserved as historical landmarks and specimens of architectural expressions of the Philippines. I strongly believe in that.

“Sources of secondhand lumber come from as far as the Ilocos, Cagayan and the Bicol region. Supply is dwindling, and acquisition is very competitive. The solution: Global warming is now felt worldwide. Cyclones, tornadoes and typhoons besiege the surface of the earth. In our part of the world, typhoons have uprooted trees. Here on the UP Diliman campus, many acacia trees have been uprooted. Some of my latest sculptural works come from them.

“I compete with bakeries which use them (uprooted acacia trees) as firewood. When bakeries use them as firewood, the tree is converted into carbon dioxide which further destroys the environment. When my school uses them for sculpture, we practice carbon segregation (preventing carbon dioxide from being released into the atmosphere). The chippings are used to enrich some of our gardens.

“The art scene is an arena of war, a war composed of many battles. To win the war, you must win more battles than your competitors. The most important battle in this war is the battle for space. For beginning practitioners, my advice is for them to promote alternative spaces into viable art venues. If they succeed in this endeavor, they likewise promote themselves into viable exhibitors. Then galleries would begin to take notice of them.

“There is a shortcut to what seems to be success. This is by making a monkey out of yourself. Many galleries develop their own monkeys and include them in their stables. When gallery-owners talk to each other, these practitioners are referred to by them as monkeys. Galleries do not disrespect the rights of other galleries over their stables of monkeys. Unggoy ko ’yan, unggoy mo ’yan.

“What is a monkey? A monkey is a practitioner who is recruited by a gallery-owner to paint or sculpt like a well-known artist, but a monkey signs his name. This is tantamount to art imitation, a gray area in artistic legalese. There are many successful monkeys on the whole art scene. Many of them would like to rid themselves of their ‘monkeyness.’ Very few have succeeded.

“Monkeys may make their mark and money in their own time. But art history will never forgive them.”