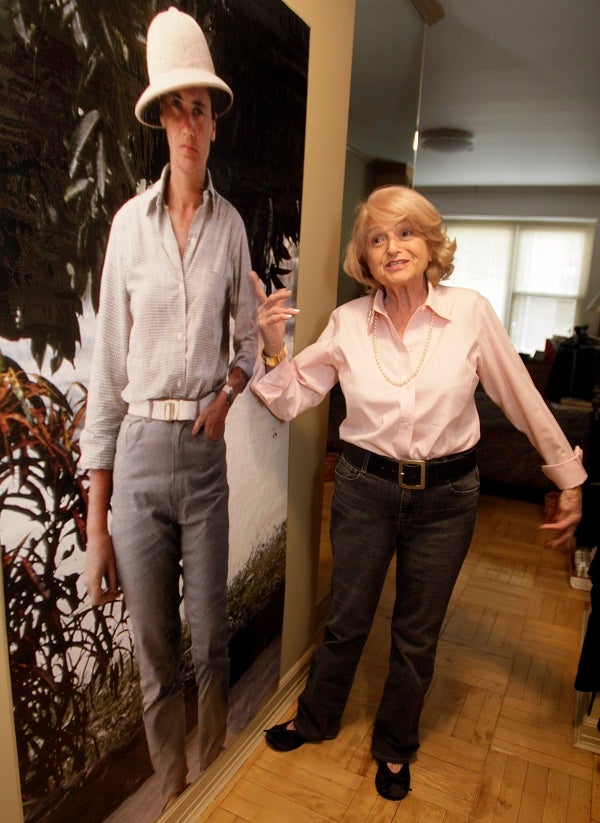 In this Wednesday, Dec. 12, 2012 photo, Edith Windsor talks about a trip to Suriname she had with her spouse, Thea Spyer, pictured at left, during an interview in her New York City apartment. Windsor has found some notoriety at age 83, as her challenge to the federal Defense of Marriage Act will be heard by the United States Supreme Court. (AP Photo/Richard Drew)

NEW YORK — At age 83, Edith Windsor gets plenty of compliments for her courage to take on the federal government in a landmark case that has put attitudes about gay America squarely before the Supreme Court.

But the Philadelphia-born former IBM executive scoffs at how much gumption was necessary to go to court at a time when societal views of gay relationships are shifting.

“The world has progressed,” Windsor says. “At the beginning of World War II, they really did think we had horns.”

Windsor’s lawsuit in federal court in Manhattan is one of two that the Supreme Court agreed to take up when it announced earlier this month that it would hear arguments over California’s ban on same-sex unions and Windsor’s dispute about federal benefits for legally married gay couples.

“It’s very joyous,” Windsor said in a recent interview at her apartment on Fifth Avenue in lower Manhattan. “I feel like everybody’s treating me like a hero. Everybody thinks it takes enormous courage.”

It was a moment she could not fathom when her heart nearly gave out after the 2009 death of her spouse, Thea Clara Spyer, less than two years after their marriage in Canada.

Windsor suffered an attack of stress cardiomyopathy, also known as broken heart syndrome, that was so bad that her heart stopped.

“I was ready to go. I didn’t care,” Windsor recalls. “I had a wonderful life.”

“I keep saying, ‘Keep me alive until after the Supreme Court'” arguments in March, she said. “It’s a very important case. It’s bigger than marriage, and I think marriage is major. I think if we win, the effect will be the beginning of the end of stigma.”

The court case was a simple set of facts. Windsor maintained that the federal government’s insistence in the Defense of Marriage Act that a marriage can only be defined as a relationship between a man and a woman meant she was not entitled to a marital deduction on Spyer’s estate.

That meant, she said, that she owed $363,053 in taxes that she would not have to pay if the law did not unconstitutionally discriminate on the basis of sexual orientation.

The threat of discrimination was not new. Early in her life, she kept her sexuality from her family and friends, mindful of the dangers. Eventually, revelation of the truth brought sharp criticism from a sister.

For a time, she was married to a man she considered her hero after he left the Army just as she was about to enter college. But she told him she was gay, and they eventually divorced.

In the early 1950s, she moved to New York City from Philadelphia and obtained a master’s degree in mathematics from New York University in 1957. She then joined IBM and worked for 16 years in senior technical and management positions.

In 1963, she met Spyer at a Greenwich Village restaurant known for its friendly attitude toward lesbians. Though they arrived with others, Spyer and Windsor were almost inseparable on the dance floor that night and by evening’s end, Windsor had danced a hole in her stockings.

The dancing marathons continued sporadically over the next two years, usually when Spyer and Windsor met by chance at parties and usually to the frustration of their dates.

It was not until the spring of 1965 that they got together. Windsor suggested they date for a year and consider engagement for another year if that went well.

And, as she said in an affidavit in her court case, Windsor told Spyer: “‘And if it still feels this goofy joyous, I’d like us to spend the rest of our lives together.’ And we did.”

The engagement stretched for 40 years.

Spyer, worried an engagement ring would unintentionally reveal Windsor’s sexual orientation to her IBM colleagues, gave her a circular diamond brooch she wears to this day.

“Our choice not to wear traditional engagement rings was just one of many ways in which Thea and I had to mold our lives to make our relationship invisible,” Windsor said in her affidavit.

“We both faced pressures not only in the workplace and in society at large, but also from family and friends,” she added. “Like countless other same-sex couples, we engaged in a constant struggle to balance our love for one another and our desire to live openly and with dignity, on the one hand, with our fear of disapproval and discrimination from others on the other.”

In 1968, Spyer, a psychologist, and Windsor brought a small house together on New York’s Long Island and traveled frequently.

They hosted parties where Spyer displayed her culinary skills and grew ever closer, a tight bond tested repeatedly after Spyer was diagnosed in 1977 at age 45 with multiple sclerosis.

Spyer went from using a cane to crutches to a manual wheelchair and eventually to a motorized wheelchair she operated with one functioning hand. When Spyer could no longer swim, Windsor held up her body in the water so she could at least feel the water and splash.

Windsor, who had heart trouble, said they went to Toronto to marry when they realized they might not live long enough to wait for New York to approve same-sex marriages. Gay marriage became legal in New York last year.

Windsor’s apartment is filled with photographs of the couple, including a life-size picture of a youthful Spyer, and Windsor’s favorite, a picture of them dancing together ago when Spyer was in a wheelchair, swiveling with Windsor in her lap.

Windsor marvels at how their lives, once hidden from nearly everyone they knew, are increasingly accepted. She never really expected such changes in her lifetime.

“Did I ever think we would be discussing equality in marriage? Never. It was just so far away,” she said.

Still, she said, she hopes the Supreme Court rules in a way that can lift the gay community, especially those who are plagued by the effects of prejudice.

“I grew up knowing that society thought I was inferior,” she said.

Now, Windsor hopes to enjoy a legal victory with a street party in front of a gay center, aware that it would be too large to be held beneath a roof.

“There are hundreds and thousands of people who would want to celebrate,” she said.