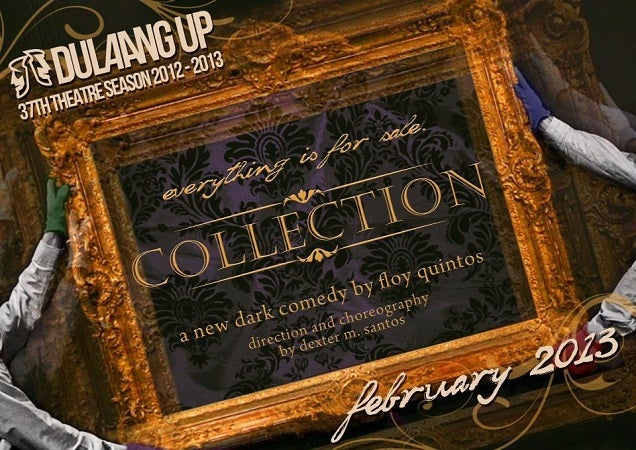 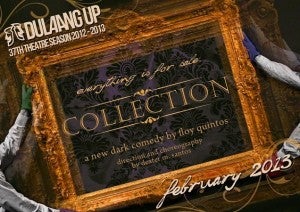 MANILA, Philippines–What happens to a society that is overrun by greed and materialism? By shifting moral values and by acquisitive desires?

“Collection,” the much-awaited new work from acclaimed playwright Floy Quintos is a dark comedy that paints a disturbing picture of society obsessed with conspicuous consumption, surface glamour and the endless unsatisfying pursuit of the Next Big Thing. “Collection” closes Dulaang UP’s 37th Season.

In this artistic vision of a materialist hell, a fictional government agency, the National Commission on the Disposal of Philippine Patrimony, has sanctioned the sale of historical and national treasures like the Banaue Rice Terraces, the Chocolate Hills and the Malolos Constitution. The proceeds go to a national lottery designed to alleviate poverty through dole outs.

Each of them wants the Virgin for his own, and all are willing to bid excessively to possess it. In the end, the auction pits not only the wealthy bidders against each other, but against the mass of Filipinos all wanting their share in the sale. But will it push through? Will one buyer own the image? Or will the sands of shifting morality cause the ground on which this fragmented society stands to crumble?

“Collection” is directed with an imaginative and imagistic flair by Dexter Santos whose innovative works include Lulu, Rizal X, and Orosman at Zafira. Also in the cast are some of theater’s biggest stars including Red Concepcion, Jean Judith Javier, Janine Santos, Teetin Villanueva, Jules Dela Paz, Via Antonio, Arkel Mendoza, Natasha Cabrera, William Manzano and Dulaang UP ensemble.