‘Happy New Year! Will you marry me?’ | Inquirer Lifestyle 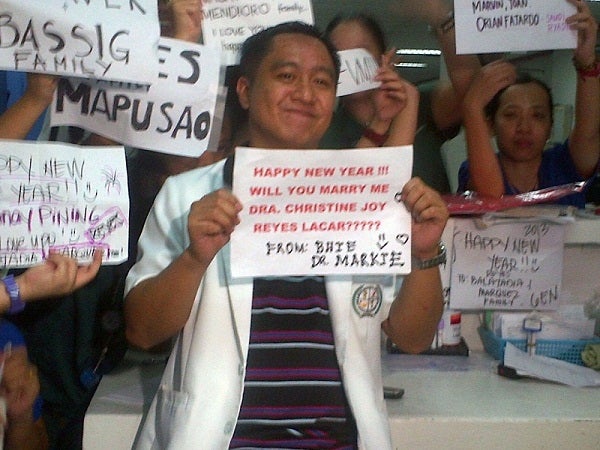 Dr. Mark dela Cruz shows a message for his fellow paediatrician and girlfriend Dra. Christine Joy Reyes Lacar: ’Will you marry me?’

‘Happy New Year! Will you marry me?’

MANILA, Philippines—Just as the hospital atmosphere starts to get busy ahead of the anticipated New Year rush of revelry casualties, a doctor lightens up the mood after he proposed marriage to his girlfriend on national television.

As on-duty hospital personnel take the chance to flash their posters with New Year greetings for their loved ones in front of television cameras at the Jose Reyes Memorial Medical Center in Manila on New Year’s eve, Dr. Mark dela Cruz, a paediatrician, takes the spotlight after flashing his message written on a white sheet of paper, bearing the message, “Happy New Year!!! Will you marry me?”

The message is meant for his girlfriend, Dr. Christine Joy Reyes Lacar, also a paediatrician from the Our Lady of Lourdes Hospital.

Short as it may seem, the couple’s relationship started just some three weeks ago although they’ve been friends since their medical school days.

“It’s been weeks for us but I know I found the one and I’m lucky. I love her so much,” Dela Cruz tells reporters in a quivering voice.

Prodded to get his girlfriends’ answer over the phone, he calls up Lacar, telling her about his televised proposal.

The conversation ends with an “I love you” from Dela Cruz, giving reporters the hint he got the “Yes”.

“She said ‘Yes!” the doctor confirms with a big smile on his face. He says he planned for the proposal, knowing that reporters would be coming to JRMMC to cover New Year revelry emergencies.

He describes Lacar as “very sweet and very intelligent.”

Dela Cruz says he will give the engagement ring to Lacar in a meeting with their parents where he will formally ask her hand in marriage.