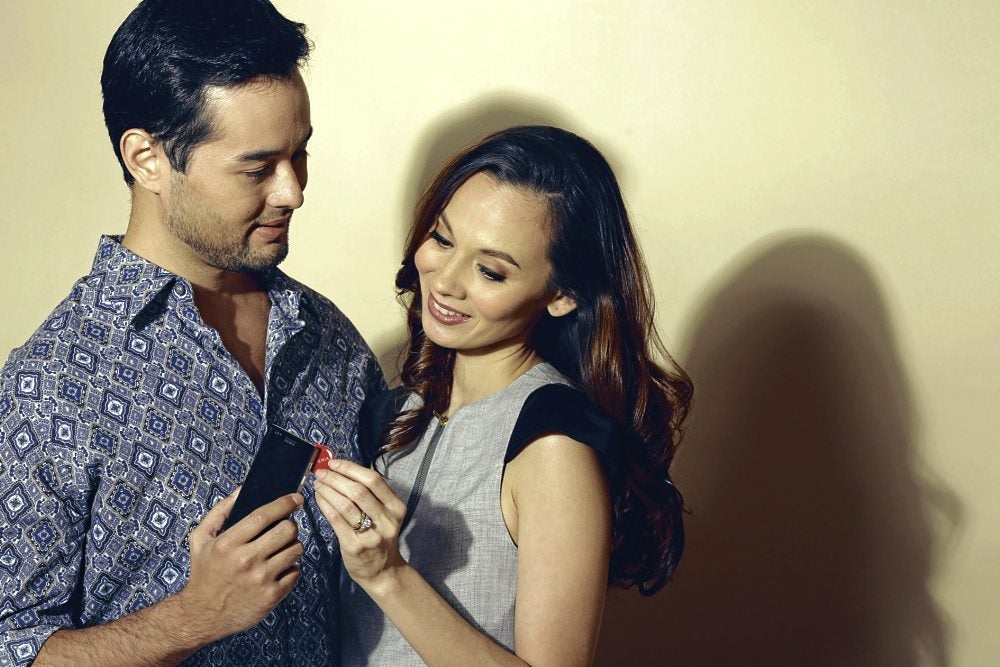 The phenomenon of smartphones and other IT gadgets has enabled people to stay connected 24/7 with either their loved ones or business associates, wherever they are. Although these devices can boost productivity, they can also be a distraction either at the workplace or at home.

Power couples such as educator-accessories designer Amina Aranaz, 33, and her husband, Rafael “Rafa” Alunan, 38, a mobile marketing executive, use mobile phones as tools to help achieve a work-life balance, rather than letting the gadgets become an invasive medium. By setting boundaries, they don’t allow themselves to be held hostage by the new technology.

It helps that they’ve established a solid relationship before the upsurge of mobile communication. Amina, then a senior high school student at Poveda, attended a dance rehearsal for the debut of her friend. Rafa, an architecture student at the University of Santo Tomas, was one of the debutante’s partners in the dance of the 18 roses.

Amina caught Rafa’s eye and asked her partner, who was coincidentally his best friend, to switch partners. That was the start. Their courtship went on for eight years, interrupted only by Amina’s studies in Milan, Italy.

Beyond the physical attraction, Amina admired Rafa’s utmost respect for people. Rafa thought highly of her values. Rafa was Amina’s only serious boyfriend. Similarly, Amina was the only girlfriend Rafa introduced to his family.

The couple now have three children—Lucas, 5, Helena, 4 and Diego, 2. When they moved to Alabang, Rafa began driving Amina to work, since both their offices are in Makati.

“I spend more time with him now. That’s our time together,” says Amina.

At noontime, Rafa would send a text message inviting her for lunch, during which, as accomplished individuals who have a lot of responsibilities, talking business is inevitable.

“There’s a lot of sharing, frustrations, good days and bad days. There’s also a level of distance you want to keep. We respect each other’s territory,”  he says.

Rafa has been an influence in getting Amina more tech-savvy. She had grown comfortable with the old feature phone and its standard voice calls and SMS services. When he gifted her with a smartphone for her birthday, she was resistant at first.

Nonetheless, she tried it and was amazed at how technology could afford her greater convenience and openness.

“Ever since I got a smartphone,” she says, “I don’t have much idle time in the car. It can be a mobile workplace and an entertainment source. I’m browsing on Twitter and Facebook and checking e-mail. Before, I’d bring my laptop with those plug-in sticks in the car. That was eliminated with the smartphone.”

As creative director for Aranaz Bags and executive director for communications and admissions at the School of Fashion & the Arts, Amina says her mobile phone has allowed her greater accessibility.

“When I’m at home or with my family, my staff is always in touch with me. They can send me an e-mail, which I can immediately access for approval. Or sometimes photos of projects are sent to me on the spot, so I can check.”

“I taught my eldest son how to dial my cell phone whenever [he needs something from me and] I’m at work. I can easily coordinate with our yayas and helpers for the kids’ activities or whatever is needed at home. Even my children’s school is always in touch with me via cell phone.”

Recently, Amina and Rafa acquired an Android smartphone from Sony. For first-time Android users, the experience has been pleasant. Amina uses the  Sony Xperia P, which claims to have the sharpest display among midrange phones.

During her first week, she found it easy to follow the touch-sensitive navigation buttons. There were default icons on the screen for multimedia apps, such as FM radio, music and camera. Amina immediately downloaded a Christmas radio station app and Evernote for Androids to get organized and even capture images.

The phone’s camera also offered extensive panoramic views. When she tried the eight-megapixel camera in a family dinner, it captured the details and color reproduction was accurate.

She admits she’s still discovering more apps and how to customize them for her uses. “I have downloaded the Facebook  app and linked my account. Although navigation on FB is different, it’s easy and organized. The screen is larger and you can see things clearly.”

As with most Android phones, the Sony Xperia P has Google Maps.

“I love using maps because I’d like to know where I am or what’s around me. I’m such a backseat driver when Rafa is driving. The maps will be useful,” she says.

One of the main attractions of the Sony phones is the Mobile Bravia engine, which provides sharp and natural images. Watching YouTube can keep the couple’s kids occupied when the family is on the go.

Still, Amina doesn’t allow her mobile and other gadgets to hold hostage her work and family.

“I prioritize using my phone on a given occasion. When I am with my family, I will check my work e-mail only once a day. It’s about self-regulating how and when to use your cell phone.”

Rafa, country manager of Out There Media, is in the business of advertising through mobile communication.

“If a brand wants to generate awareness and engage its target consumers through the mobile, my companies get the database of the telcos. We identify the persons, their demographics and their interests. Based on the information, we target the ads specific to the individual so it’s relevant,” he explains.

Although it is still in its infancy, the company serves clients such as HSBC, Zalora, Unilever and Citibank, and reaches people from all ages and walks of life.

Rafa has the Xperia Ion, which sports a bold, masculine design and is equipped with a 12-megapixel camera with flash.

“My first concern was adjustment (to an Android). There was no difficulty. It works similarly like other gadgets in that it’s user-friendly and intuitive.”

In his business, Rafa usually racks up a huge phone bill. He is thus delighted with the WhatsApp for Androids, an instant messaging platform that enables  him to send unlimited messages to contacts for free. Since many of his friends are on WhatsApp, it should help him cut down on his phone-messaging costs. “I jump from WhatsApp to coordinate with friends and my colleagues in Singapore, go online to check my e-mail, then I see what’s going on in the news and my social networking sites to keep informed on the latest and, at times, to monitor the traffic.”

Another advantage of the Android phone is that it has customization features to suit his needs.

“I rely heavily on my calendar for work as it keeps track of appointments. With the Ion, before I start typing into my calendar, a prompt asks if I want to enter a calendar date and events while using auto correct, or if I prefer not to use it at all.  Also, do I want to use upper- and lowercase letters? These features indicate attention to detail,” he says.

The main feature of the Ion’s front is the large 4.6-inch screen and high-resolution display. Hence, vivid colors under the proper conditions.

“The screen is big so it doesn’t take away the pleasure of watching MTV or movies,” he says.

“From a mobile marketing perspective, I see the phone as one of the favored tools for marketers,” he adds. “It will be easy for a fast-moving consumer-goods company to run a promo using a bar code attached to the product. It would allow the user of the Sony Xperia to take a photo of the bar code. Once you capture the code, it will automatically link you to the website relating to the promo with the bar code in use. You can then enjoy the benefit of the promo.”

For family use, the Xperia can double as a babysitter. “The large screen and sharp color display will keep my kids calm when they travel. They will be equally glued to it as I am.” The battery life is longer than most phones.

Patrick Larraga, head of Sony Philippines’ mobile division,  says the local market has been enthusiastic about the Xperia phones, especially the camera features, sound and image quality and the gentle curve in design.

He cites the rise in Near Field Communication (NFC), an electromagnetic wireless and contactless technology that activates within a space of four centimeters. It enables two devices to exchange data. Nowadays,  the user can either tap the handset near a cash reader to pay, or wave it in front of a Bluetooth speaker for playback.

For its new phones, Sony includes two SmartTags, little tokens that can be programmed with its NFC-equipped Android phone. These tokens can set up commands that will help the user with one’s daily tasks without any effort.

“You can assign tasks for each button—initiate GPS, for instance, or navigation, or setting the calendar for schedules. There’s no need to manually go through each function,” explains Larraga.

One can swipe the phone by a SmartTag placed on the desk and it can automatically trigger the phone’s alarm clock or put it on silent mode. Amina uses the SmartTag to turn on the alarm before sleeping and increase the volume on her phone. “It’s like a remote control for my cell phone.”

In all, smartphones can be a boon than a bane in a high-pressure society. “Any good phone should be able to do that when placed in the right hands,” says Rafa. “You have to make a conscious effort to block any distractions that affect time with the family. It’s difficult, to be honest, and it’s a constant battle. It comes down to balance, priorities and time management. The least we should have are the right tools in order to achieve that balance and make the juggling of tasks seamless and enjoyable, and the Sony Xperia does that for me.”