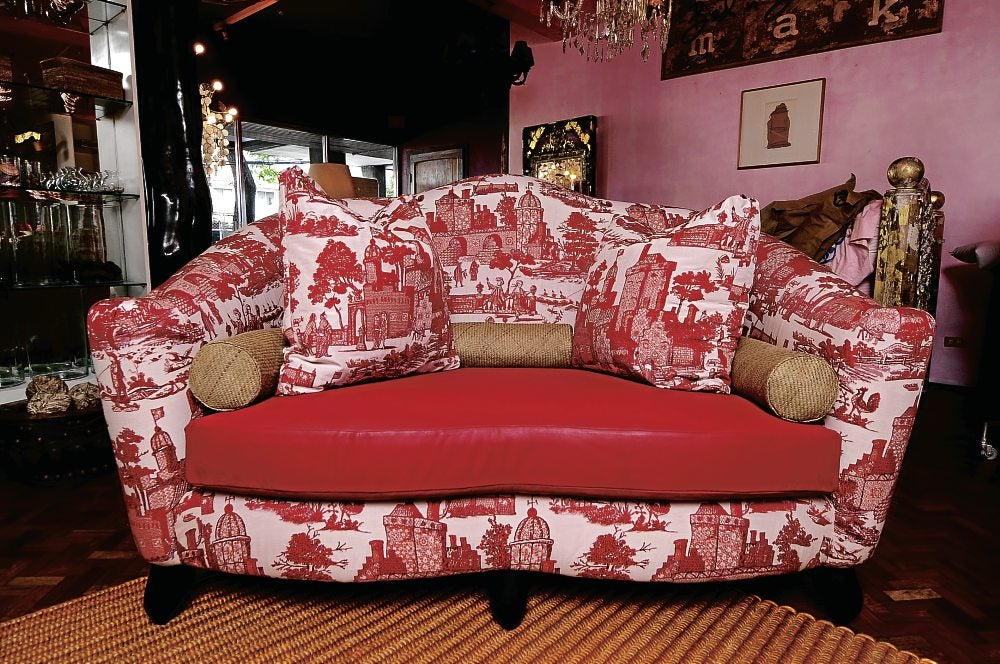 Though she’s a successful furniture designer, Yolanda “Yola” Perez Johnson hopes she can return to her art “that nobody liked.”

A student of Roberto Chabet, proponent of conceptual art (art that expresses an idea instead of conventional aesthetics), Johnson was one of the first awardees of the CCP Thirteen Artist Awards.  However, her art was beyond comprehension by the average viewer. Her foray into home furniture and furnishing was spurred by rejections.

In the early ’70s, Johnson mounted a white-on-white show at the Cultural Center of the Philippines Little Gallery. The exhibit was inspired by the white masking tapes that peeled off on the gallery wall.

“I surrounded the gallery with white electric tape set on a grid on the white wall. I also put discarded egg crates,” said Johnson.

One day, an Englishman walked into the gallery. Seeing only a sea of white and broken egg crates, he asked where the exhibit was.

“The exhibit is here, but you don’t see the show,” explained Johnson.

“Is there one? Who is the artist?” asked the visitor.

“I’m the artist,” replied Johnson. “If you don’t see it, then maybe it’s not there.”

“Are you really kidding me?” the Englishman said in disbelief and he walked out.

“The initial rejection was painful, but I got used to it,” said Johnson.

On another occasion, Johnson helped a friend buy artworks by masters to furnish the latter’s residence. The friend also offered to purchase a work by Johnson.

The artist wanted to give her work as a present on condition that it would be displayed prominently in the living room because of its size. Johnson was referring to an installation, composed of corroded galvanized iron sheets that were salvaged from a demolished soft drink factory. Fascinated by the golden patina of the rust, she displayed those sheets in her exhibit at the CCP Main Gallery.

During the exhibit opening, the friend arrived, fully dolled up. On seeing Johnson’s works, she left in a huff.

“We had no contact for a year,” recalled Johnson. The following Christmas, the friend gave her a coffee-table book on Fernando Amorsolo. She then explained to Johnson that she couldn’t understand the value of utilizing decayed galvanized iron sheets as a home decor.

“I was a single parent and I had to make ends meet. I had to put some function into my art. Since then, from that rusty iron, I made an object that is our bestseller—the candleholder with a distressed finish,” said Johnson. The candleholder has a rustic look, with its sculpted metal base and cylindrical glass cover.

Spurred by the abnegation of her works, Johnson turned to rugmaking on seeing the woven products using banig, buri, tikog and raffia. She exported baskets and floor coverings. “After 10 years of working on shows, I gave up. There was no place to put my artworks.”

Abaca has been her signature material because of its durability.

“The rugs will last you forever because abaca is the longest and strongest fiber in the world. It’s abundant in the Philippines because of our soil and climate,” she said.  Her looms are found in Bukidnon and Camalig, Bicol. Johnson’s patented binding weave won an award at the International Contemporary Furniture Fair in New York in 1994.

The furniture design also started as a fluke. She and her husband, Patrick Johnson, lived in a large apartment which was sparsely furnished with a kitchen table, a few chairs and a bed. When her in-laws visited, Johnson was forced to create an entire furniture collection. When Johnson downsized to a smaller space, she had to sell her furniture. Prospective tenants of the apartment wanted to buy her pieces. Lawyer Tunting Cruz-Matters encouraged Johnson to set up a showroom.

From pigpen to palace

“I can make a pigpen into a palace,” she said.

“I studied to get the right size and height,” she said. “The Chinese influence is as much a part of our heritage as the Spanish.”

Johnson’s signature pieces are made from old wood from ancestral homes, lamps inspired by Dada Art and candle holders made from Romblon marble. The mattresses and upholstery of her furniture are made fluffy with goosedown and cotton filament. “The filling is important. We don’t use kapok,” she maintained.

Today, Johnson’s Soumak is a haven for artisinal home furnishing. The name “soumak” is both a type of Oriental rug technique and an abbreviation for South of Makati. Her abaca rugs have covered the floors of The Shard, Britain’s tallest building; Clarence House, the summer residence of Prince Charles; Ralph Lauren’s flagship store in New York; and the residences of the late Whitney Houston and Burt Bacharach.

In the Philippines, her furniture, beddings and drapes are found in the residences of the crème de la crème. Lizzie Zobel has been a fan. Her rugs were selected for Manny Pacquiao’s new Forbes Park residence.

Lately, she has been collaborating with artists such as Reg Yuson and Trek Valdizno to produce furniture pieces. Her vision is to set up a showroom for their works. “I pride myself in being able to harness the talents of young artists.”