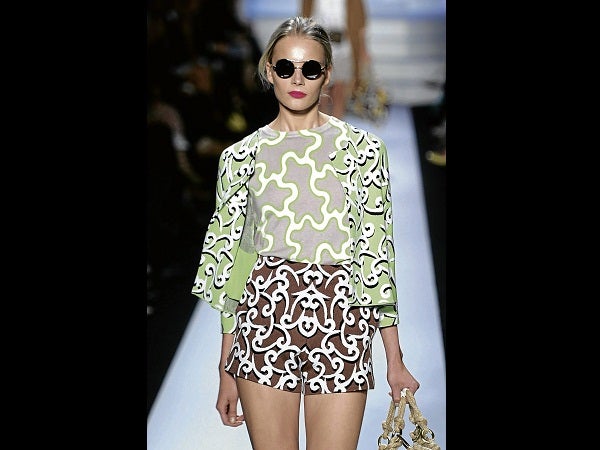 There was plenty of fabulous fashion to be seen in 2012, but for every great moment, there was at least another “oh no she didn’t!” one to follow.  For all the good in the fashion world, there’s also plenty of bad.

The year 2012 was most certainly a year of fashion contradictions. Earlier in the year, we saw an influx of pastels and citrusy colors, prints, feminine touches, and a lot of ’20s references, as seen in the Spring-Summer collections as well as in the Prada-made costumes for the movie remake of “The Great Gatsby.”

Then we saw some ’50s-inspired lines, thanks to Raf Simon’s well-received debut collection at Dior. The Fall-Winter collections, on the other hand, took the ’60s Mod route, and saw a return to opulence with metallics, sequins and brocade.

And while the past few years were heavily influenced by the ’80s, the ’90s returned with a vengeance, evidenced by cropped tops, athletic-inspired fashion, cut-outs, high-cut sneakers, and leather in all shapes and sizes worthy of Catwoman and “The Girl with the Dragon Tattoo.”

Together with interviews with Inquirer staffers and friends and colleagues in the industry, here’s our rundown of trends to keep and toss for the coming year.

Being a girl who wears prints in moderation, I think layers upon layers of prints are great to see on the runway, but not really in real life. Very few can pull it off, and when worn incorrectly, prints can look distracting, like a wrapped-up rug— make that a scarf.

Remember the mullet cut? Short in front, long in the back? It wasn’t exactly the most flattering hairstyle, so how can it look good as a skirt? It’s a style as bad as the namesake hairdo, says designer Maureen Disini and Gasso executive creative director Paolo Arevalo.

I never wore them in the ’90s, and with the exception of Gwyneth Paltrow wearing that cropped Pucci late last year, I have yet to see the abrupt boxy cut-off look flattering on anyone, and they kind of remind me of Britney Spears circa 2001. And though the cropped separates look more stylish this time around, it’s not really a look one can wear to the office, right?

Those see-through gowns, with some even blatantly showing the wearers’ undies, should be banished, says Inquirer’s Alex Vergara. Not only do they border on the indecent, but if also worn by the wrong woman whose tenuous hold on the hotness department has gone tepid (and they happen to be legion), they could look really ugly, he adds.

Another sheer material that’s borderline saccharine? A pure lace ensemble. “Lace combined with a more masculine and neutral-colored fabrics is more flattering. I want to see more classic silhouettes given new twists or treatments through the use of new and unlikely materials and techniques,” he adds.

Sure, we’ve seen the statement top, the statement pant, pretty much statement anything. When every outfit is a runway moment because they are a tweet and Instagram post away, “streetstyle” dressing has become more contrived. With today’s culture, it’s not about the proportion, but the total getup that says, “Look at me!”

A statement piece should hold up on its own, but when you wear statement pieces all together, it all adds up to a look fit for matrons-in-training, adds Arevalo.

A French term for shaded, the ombre hair color trend works if you have long, curly hair with colors subtly graduating from the roots, but if the colors are literally two-tone brown and blonde, then it will only look as if you forgot to color your hair. Again, not the best look on anyone, adds Disini.

“Color-blocking can be figure-flattering,” says Inquirer’s Raoul Chee Kee. It’s also a way for women who tend to favor black or neutrals to experiment with color, he adds. We saw a lot of orange this year, but for next year, expect to see a lot of green in various shades.

Those sleek, slim separates will always be in style, and are perfect pieces to pair with trendier separates. And if your wardrobe consists of black and white, you’re in luck—we saw plenty of these looks on the Spring-Summer 2013 runways.

Yes, those day clutches will still be around for next year, with bigger envelope styles to come for Spring-Summer 2013. They will come in handy, too, when you tire of carrying your oversized purses.

We’ve seen a lot of these this year—and we’ll probably continue to see more in the coming year. Most will say this is unwearable in Manila, but with more modern fabric treatments (even denim that’s made to resemble leather), this will work even for warmer months, says jewelry designer Janina Dizon-Hoschka.