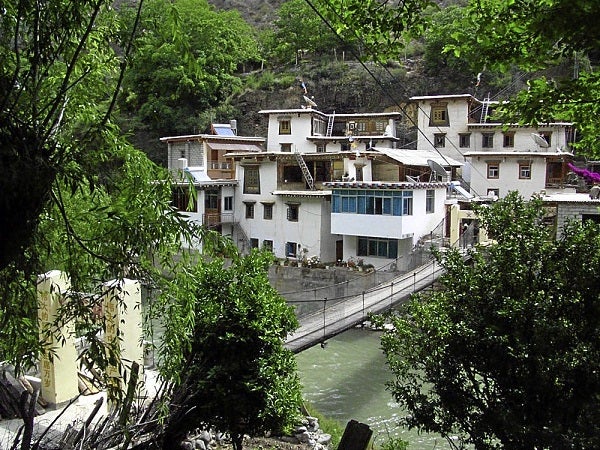 In an effort to gather more information about the Tea Horse Trade, I drove out to the village of Shu-he. Here, a museum had been set up by a private company to commemorate the age-old exchange of horses and tea leaves between China and Tibet.

The museum displays were not too original. I was more impressed with the fact that a private real estate company actually organized the museum. This was probably part of the conditions for obtaining the rights to develop what had once been a sleepy community inscribed on the United Nations Educational, Scientific and Cultural Organization World Heritage list.

Expectedly, development meant Korean and Italian restaurants clustered around a large pond. Staring at the shimmering surface in which the neon signs of the cafes were reflected, I was suddenly reminded that there was another pond somewhere in the village. I had seen it in my last visit to what was then a much more placid Shuhe. And so, guided only by recollection, I went in search of this half-forgotten body of water.

As the shops thinned out, I sensed my surroundings become more pastoral and familiar. Finally, I saw again the blue-green pool bordered by willow trees. It was to drink deeply from pools like this that, long ago, weary caravans had stopped in a place as isolated as Shuhe.

Returning to Zhongdian and the museum proposal of my host, Mr. He, we decided that it was time to go on the Trade Road itself. We set off one fine cold morning, driving carefully along the winding highway. Everywhere I looked there were massive mountain walls. Down below was a foaming river. Every now and then, Mr. He pointed out an abandoned portion of the original road, now almost erased.

We stopped at a village which had once been an important resting station. I noted that some of the houses sported satellite dishes. Mr. He sought out a shop which specialized in the fashioning of covered wooden bowls. These were used for meals but also for special rites.

My hands caressed the highly polished surfaces and the exquisitely turned sides. Wares like these were what the trade had fostered. Master craftspersons became famous all throughout the road for the beauty of their wares. Their pieces were then carried to a larger market than what would have been available locally. Such a broad distribution network helped support very high standards of excellence.

With my friend Renzeng Cuomu acting as interpreter, I interviewed the lady who ran the bowl workshop. Resplendent in her traditional Tibetan attire with its rainbow-like apron, she patiently explained that it was getting harder to find young people who were willing to learn the craft. Likewise, plastic containers were eroding her customer base. Fortunately, she sighed, there were still families who aspired to own at least one flawless bowl which would serve as the focal point of their daily meals.

Listening to this amiable woman, I whispered a silent prayer: Yes, may there always be those who appreciate the joy that craft brings to our existence.

Mr. He then showed me a hanging bridge which had figured prominently in the exploits of the famous Long March of Mao Zedong’s troops. I recalled seeing this same bridge replicated in one of the museums I had toured in Zhongdian. For it was at points like this that the trade road intersected with the mainstream history of the People’s Republic of China.

Even as Mao and his soldiers heroically conquered the cruel mountain ranges of the region, they were actually walking the very same paths on which traders had been quietly plodding for centuries.

We finally reached a research center nestled in a tranquil valley. It amused me to note how its tangerine walls jostled for attention with eaves painted in all the hues of the prism. At these heights, nothing much grew and the mountains were monolithic in their unforgiving drabness. It made sense that people would take comfort in color. Furniture, clothes, carpets would all be dipped in a riotous carnival-like palette, helping to warm us with the knowledge that we were human.

Viewing the many cabinets in the library filled with sacred texts wrapped in silk, I had a sense of other points of brightness in this fierce bleak world. I was reminded that along the perilous trails of the Tea Horse Road came not just commodities but mind-expanding philosophies to act as guides for the equally dangerous paths of life.

I noticed in a dark corner of a shuttered hall, discarded statues of Tibetan gods. Dusting one off, I saw how well carved it was. Though made from humble materials like clay, it was as expertly formed as any golden idol from the palaces of Lhasa. I was told that these statues had been made right in the study center, at a time when it was still filled with monks.

An animated discussion ensued. Everyone agreed that this was one more craft which needed to be revived. I even suggested that Mr. He order from the good monks similar clay figures to be used for tableaux in his museum.

Later in the day, I discovered that, aside from spending their days contemplating scripture, the denizens of the study center also ministered to the medical needs of the people from the nearby villages. I was shown the clinic where traditional herbs and potions were prescribed.

Someone suggested a consultation and I gamely agreed. A tall monk felt my pulse and studied my face for a long time. Then he proceeded to name some of my ailments which, thankfully, were not too serious. Having undergone a check-up before my trip, I knew that much of what I was being told coincided with what my own Harvard-trained physician had also observed.

It turned out that the tall monk was actually a brilliant inventor. After some prodding, he shyly showed us a grinding machine that he had set up using power generated from a stream. I watched amazed as he demonstrated how gushing water turned a wheel of paddles, which then moved a set of large stones that pulverized the herbal concoctions.

This was truly sustainable technology producing natural medicine! On the trip back, I thought about how inventions such as these would, in the past, have been circulated all throughout the Tea Horse Road, as people exchanged opinions about how to make our stay on earth a little more bearable.

That night, I woke up suddenly, unable to breathe. This choking feeling would repeatedly seize me, making it impossible to sleep. The next morning, still gasping and groggy, I was told that I had a serious case of altitude sickness. I was advised to leave immediately for the “lowlands.”

In a town as high up as Zhongdian, this meant going back to Lijiang, which was, at about 8,000 feet above sea level, still higher than Baguio. My insular tropicality had returned to claim me, reminding me that though I had grown fond of everything I was witnessing, I was really from somewhere else.

Quickly recuperating in what felt like an almost balmy Lijiang, I decided to visit the old Ma residence, one of the many owned by the grand merchant who had been Mr. He’s grandfather. Sitting in the silent courtyard, I pondered what this house—now a hotel—must have witnessed. What strange cargoes had been unloaded on these pavements? Had Mr. He and his brother played here too as children?

While discussing his museum over endless cups of steaming brew, I had outlined for Mr He a possible conceptual framework for his exhibits. I drew a series of concentric circles while expounding on how the influence of his beloved Tea Horse Trade radiated from Central Asia to the rest of the world.

I do not know if he was impressed by my suggestion. He did copy my drawing, and, after staring at it for a long time, smiled.

Leaving the former Ma residence, I too couldn’t help but grin. I had come to this place so unaware that among these mountain peaks a busy exchange between cultures was going on. I never found the answer to my questions about the possible conflicts when two proud nations came face to face. But I was happy to assert that the concentric circles I had described now included at least one shore-bound Filipino.