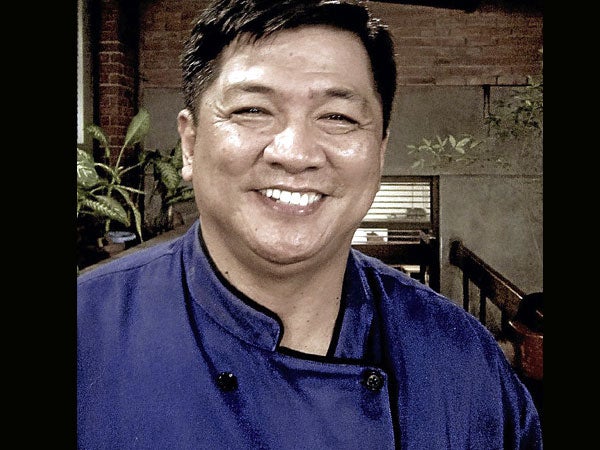 Cooking was something mothers simply excelled in, something ladies were expected to do. Cooking was part of Home Economics, a mandatory subject in high school. Today, it’s a diploma course all its own. For aspiring chefs today, hundreds of thousands are allocated for a culinary education. But other successful chefs took the more humble route of simply starting out as helpers in the kitchen.

Willie Domingo was enrolled to become an engineer. He was an Electronics and Communications Engineering student at the University of Sto. Tomas when he started tinkering around a kitchen professionally… washing dishes.

“I wasn’t born with a silver spoon in my mouth,” he shared. “I really needed cash so when there was an opening for a part-time steward, I took on the job.”

From washing dishes was born the opportunity to sometimes slice onions. From slicing onions, he learned to prepare salads. From salads, he learned to really cook. “This would become my bread and butter pala,” he said.

The part-time stint as a “steward” at the kitchen of the Sheraton led to an exchange program in 1981 that led him to Sheraton in Hawaii. After six months there, the powers that be at Sheraton Hawaii offered to process his working visa in the US. He would be in the US for the next 15 years, eight of them spent at the Sheraton. After that, he worked at the Hyatt in Guam and the Hyatt in Saipan before finding himself at the French Quarter in New Orleans.

But Filipinos, especially one with the heart of a Bulakenyo, while blossoming abroad, usually find their way back home. In 1992, Chef Willie Domingo was ready to apply himself to the Motherland.

In 1992, he was with the team that opened Shangri-la Edsa; in 1994, he opened Tagaytay Highlands and became its Executive Chef; in 1996, he opened Fashion Cafe as its Executive Chef, traveling to Barcelona and Tokyo to better get a grasp of the franchise’s concept. In 1998, he helped design the kitchen for the jazz bar Monk’s Dream, and in 2000, he took over the kitchen at St. Luke’s Quezon City.

It was this last stint that got my attention. “YOU are responsible for the St. Luke’s siopao???” I remembered rating the St. Luke’s giant siopao as one of the best in the metro. “We used to get siopao from a supplier near Coconut Palace,” he confessed. “Then one of the guys in the St. Luke’s kitchen learned to make it and mastered it.” He upgraded hospital food to the level of hotel food without sacrificing the nutritional requirements of the doctors, adding to the edge of St. Luke’s for their wealthy but not healthy clientele.

Today this chef runs the catering business of the Fabella family as well as their restaurant Red Roof on Shaw Boulevard (near 9 de Febrero, across EMAR Suites and beside Flying V).

Red Roof features playful Filipino cuisine—not your ordinary Filipino grillery. At a dinner for the International Wine and Food Society at the Fabella home titled “A Provincial Dinner in the City,” Chef Willie prepared a unique yet hearty Filipino menu that won the hearts of the ladies who wine and dine.

The menu began with Picadillong Kalabaw.  “Actually, Mrs. Fabella scolded me for this one because she wanted the carabao meat cut in smaller pieces. But for the poorer people, we have larger slices, so I had to adjust,” he laughingly recalled to the crowd after the meal. It was slightly sour, very refreshing. More than the carabao, it was the broth that had guests at hello.

Another crowd drawer was an interesting take on pancit, Pansit na Buko, inspired by a Quezon recipe. It was like lumpiang ubod but with pancit recados, complete with liempo. The star of the menu, though, was the Adobong Baboy Ramo, inspired by a northern Bulacan recipe. “Baboy Ramo? Is that legal?” queried one curious guest. The flavors were sharp, with a perfect balance of sweet, salty and sour catering to the Filipino palate as a Tagalog would know. He says he even fought with the supplier of the boar for this one because he wanted the pork to be really fresh.

Various desserts wowed the audience but most memorable were the colorful pastillas in various flavors: mango, strawberry and even blueberry and malunggay. “Where does he get blueberries here?” asked food authority Felice Sta. Maria, pondering if they were from Sagada. She was right! P300 per kilo at a weekend market, Chef Willie shared.

Today Chef Willie teaches cooking at the Jose Rizal University. “Initially I didn’t want to teach. As it turns out, it is my passion,” he reflected.

To those who allow it, I guess your destiny will really find you. Imagine the flavors we would have lost if Willie Domingo ended up tinkering with semi-conductors instead of in the kitchen. From a steward washing plates, he is now a steward of authentic Filipino food. Destiny called and he answered. It was meant to be.