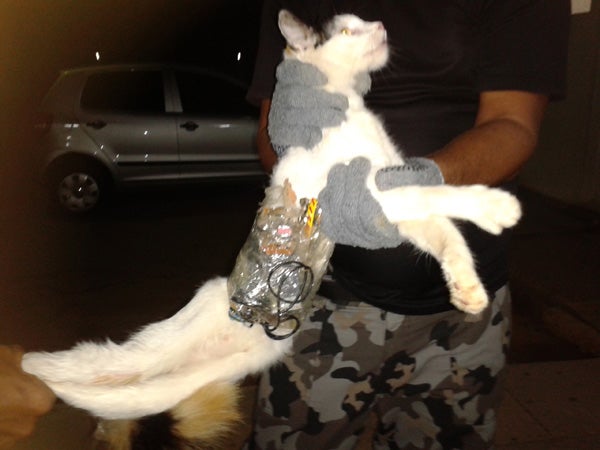 In this photo taken with a cell phone early Monday, Dec. 31, 2012, and released by Brazil's General Superintendency of Prisons of Alagoas (SGAP), guards hold a cat that has items taped to its body at a medium-security prison in Arapiraca, in Alagoas state, Brazil. A prison official says they caught the cat slipping through a prison gate with a cell phone, drills, small saws and other contraband taped to its body. AP/SGAP

SAO PAULO— Guards thought there was something suspicious about a little white cat slipping through a prison gate in northeastern Brazil. A prison official says that when they caught the animal, they found a cellphone, drills, small saws and other contraband taped to its body.

Alagoas state prisons spokeswoman Cinthya Moreno says that the cat was caught New Year’s Eve at the medium-security prison in the city of Arapiraca.

The O Estado de S. Paulo newspaper reported Saturday that all of the prison’s 263 inmates are suspects in the smuggling attempt, though it says a prison spokesman said “It will be hard to discover who is responsible since the cat does not speak.”