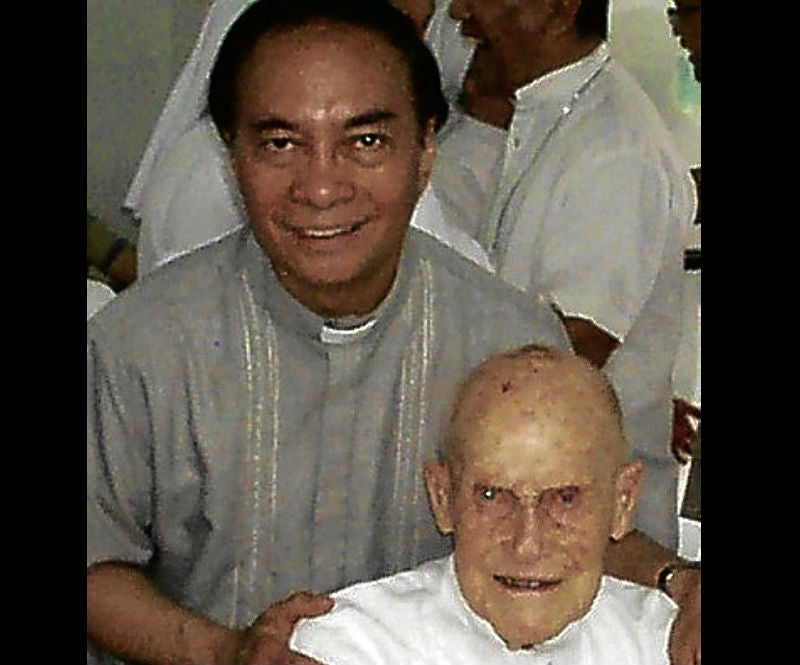 (Note: Fr. James Reuter, SJ, passed away last Dec. 31 in Manila. He was 96. The author is the parish priest of St. Margaret Mary Alacoque in Staten Island, New York, and the founder of the San Lorenzo Ruiz Global Ministry.)

In early 1991, I met Fr. James Reuter’s group in Manila at a rehearsal of their production, “400 Years in 40 Minutes.” This group was scheduled to go to the International Youth Festival in Rome later that year, and on the way to Rome they wanted to make side trips to some US cities including New York.

Could I help promote and host their visit in New York? It was my good friend Esty Juco, then public relations director of St. Paul College of Manila, who had made overtures to me about the possibility of hosting Father Reuter’s group in New York. She reassured me that she would be going herself with them as their PR girl. And she further assured me that hosting Father Reuter’s cultural company would enhance my budding Filipino apostolate in New York.

Back in New York from Manila in March of 1991, I lost no time in calling a meeting with the Philippine Clergy Association, whom I subsequently asked to be official sponsors of Father Reuter’s group. I remember how much I tried to impress them about the pastoral significance of the visit of the Asian Youth Delegation, which I was told, was actually going to represent Cardinal Sin, as well as the impressive credentials of Father Reuter, who was known as the foremost proponent of Broadway musicals in Manila.

To my delight, the Philippine Roman Catholic Clergy Association of America gave me its support without any problem. My proposal was that priests who were stationed in parishes should consider hosting at least one performance in their respective parish. It was approved by everyone. And if that was not enough, a gala night on Broadway that I had suggested was also approved!

I was thrilled beyond belief. I will produce a show on Broadway and that show will showcase no less than the Philippines’ Mr. Broadway, Father Reuter!

Since I was the overall chairperson of the activity, I subsequently formed an executive committee composed of some Filipino priests who were quite active like Fathers Bobby Sison, Joe Casaclang and Lester Avestruz and some laymen who were active in the cultural arts.

Next, I tried to get St. Malachy’s Chapel, popularly known as the Actors’ Chapel on 49th Street near Broadway, as the venue for the gala show. And in order to bolster our stature before St. Malachy’s theater management, I asked Father Avestruz, who was connected with the Spanish Office of Communications of the Archdiocese of New York, to make representations with the Office of the Cardinal of New York. As expected, we got it made…and, as they say on Broadway, we were ready to “go on with the show.”

Father Reuter’s production of “400 Years in 40 Minutes” had a cast of 25 and a crew of 10 people. Considering the limited space of the sanctuary area of St. Malachy’s Church (which was to serve as the main performance space), the play would obviously encounter certain obstacles that could affect the quality of the presentation. The pillars inside the church would obstruct much of the view of the altar area. Despite this limitation, I still wanted the play to be staged at St. Malachy.

In preparation for the St. Malachy performance, I coordinated with Father Foliette, an associate pastor of the parish who was in charge of the theater (he was the artistic director, as a matter of fact). Several meetings took place at St. Malachy’s rectory, also at the Catholic Center and at St. Joseph of Yorkville’s rectory where I resided at that time.

Father Foliette was enthusiastic about the play, it being his first assignment as the new artistic director of St. Malachy’s. He told me that he just had come from Louisiana. But as the days went by, he proved to be very difficult, complaining about the behavior of the members of the cast during rehearsals inside the church which he considered less than proper, or demanding from our committee the turnover of the entire ticket sale collection before show time with threats of not opening the theater.

It came to a head just an hour before show time. Father Foliette and I had a bitter confrontation backstage. He told me for the nth time that he was not going to open the theater unless we produced the ticket sales collections. I pleaded with him to give us a chance to come up with the collections after the show since, as I had told him many times before, some of our guests planned on giving us payment after the show. Father Foliette was adamant. No collection, no show!

I was starting to feel uneasy. It was looking like an exasperating exercise in futility. I felt panicky, my watch showed 7:30 p.m. (the show would begin at 8 p.m.) and it was still a deadlock. Father Foliette was stubbornly holding his ground, constantly telling me about theater union regulations and he had no choice but…

I remember now how at that moment I must have lost my cool for the very first time in my life. In my anger and exasperation, I exploded before Father Foliette and in an uncharacteristic outburst of words told him, “Look, Father, you are being unreasonable. You are being ridiculous. You are a priest and I am a priest, too. Can you not try to understand my predicament as a brother priest? What is involved here now is not so much your theater rules and your reputation but the relationship between the Archdiocese of Manila and the Archdiocese of New York, and the reputation and pride of the Filipino community here in New York if this show will not go on? Do I have to make you understand one more time that this group, the Asian Youth Delegation, is the representative of His Eminence Jaime Cardinal Sin, and any act of discourtesy or insult on your part will be taken by us as disrespect and insult to Cardinal Sin himself? If you don’t relent and if you continue to give us a hard time, we will be forced to call the office of Cardinal Cooke. Right now, for your information, Father Avestruz is holding a phone ready to call the secretary of Cardinal Cooke to ask him to allow us to use St. Malachy’s Church and to tell him about the way you are treating us. We have to resort to this because what is at stake here also is the relationship between Cardinal Cooke and Cardinal Sin.”

After this harangue, I saw Father Foliette drop his head, his hands covering his face in tears. He was silently crying. At a distance, I could see Father Reuter walking back and forth, feeling edgy and glancing at the two figures seated face to face before a long table, and waiting for a hopeful sign to emerge from that eventful confrontation. I could also see Father Avestruz talking in hushed voice with some Filipino friends who had appeared and were curious to know what was going to happen next. Among them was Cecile Guidote Alvarez, a prominent figure in the Off-Broadway circle and a former protégé of Father Reuter in Manila who looked very anxious.

The time said 7:55 p.m., five minutes to show time. I was told by Father Avestruz that the guests had been let inside the church. But no one among them had the slightest idea of what went on backstage. Obviously, everybody was eagerly awaiting the premiere performance in New York of the much-ballyhooed play “400 Years in 40 Minutes”—which was supposed to dramatize the Christianization of the Philippines. In no way did they realize that an intensely emotional drama had, only a few minutes earlier, transpired behind the stage. As Shakespeare wrote: “All’s well that ends well.”  “400 Years in 40 Minutes” finally played on Broadway—a dream fulfilled for many of those involved in it, but most especially for me.

As far as Father Foliette is concerned, I was told that he went back to Louisiana. As regards Father Reuter’s group, they were to remain in the New York-New Jersey area for the next two months of May and June performing in various parishes and concert halls under the auspices of the Philippine Clergy Association with the cooperation of several Filipino organizations.